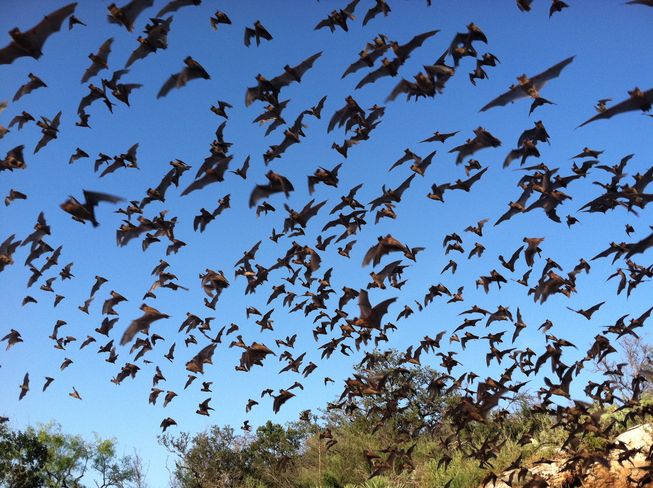 Bats deserve a better reputation. They may be creepy or troublesome when they occupy our attics, but overall they’re more pesticide than pest. Not only do they suppress disease-carrying flies and mosquitoes, but they also devour insects that plague our food supply — and without the side effects of synthetic pesticides.

The flying mammals thus carry a lot of economic clout among some of the planet’s most important people: farmers. And now a new study is shedding more light on this bright side of bats, helping quantify their importance to global food production. Published in the Proceedings of the National Academy of Sciences, it suggests bats’ worldwide value to corn farmers alone is more than $1 billion per year.

What happens when bats are allowed to protect cornfields?

To figure that out, biologists from Southern Illinois University (SIU) spent two years studying what happens when bats are only allowed to protect certain sections of a cornfield. They used custom-built netted structures, known as “exclosures,” to exclude bats from some plants while letting them hunt insects near others.

“The main pest in my system was the corn earworm, a moth whose larvae cause billions of dollars’ worth of damage to corn, cotton, tomatoes, and many other crops,” study author and SIU graduate student Josiah J. Maine says in a statement about the research. “The larvae feed on corn ears, causing direct damage to yield, but they also can introduce an avenue for infection of the corn ear by fungi, which produce compounds that are toxic to humans and livestock.”

Bats are a major predator of corn earworm, so the exclosures let these and other pests run amok on any corn crops inside. But because bats aren’t the only animals that eat the moth larvae, the researchers had to make sure other predators could still access the corn. To do that, they moved the structures twice a day so birds could forage normally, leaving bats as the only variable between netted and unnetted corn.

Protection from fungal infections and earworms

Maine found nearly 60 percent more earworm larvae inside the bat-free exclosures than in the unnetted control areas. He also found more than 50 percent more kernel damage per ear of corn inside the exclosures. Bats boosted crop yields by 1.4 percent overall, which at current corn prices adds up to a difference of about $7 per hectare. “Based on the difference in crop damage I observed, I estimated that bats provide a service to corn farmers worth about $1 billion globally,” Maine says.

And on top of limiting pest outbreaks, the research also showed how bats protect plants from fungal infections that can develop in insect-damaged tissue. That’s an additional money-saving agricultural service not included in Maine’s estimate.

“This was sort of a serendipitous discovery,” he says. “I found that [bats] seemed to be suppressing the population of crop pests and thereby suppressing the abundance of the toxic fungus and also the toxins produced by that fungus.”

In the U.S. alone, previous research suggests insect-eating bats save farmers anywhere from $3.7 billion to $53 billion per year by protecting crops of all kinds. This study adds some detail by singling out corn, an especially important food crop, and estimating bats’ global economic impact on those who grow it.

“Corn is an essential crop for farmers on over 150 million hectares globally,” says Andrew Walker, director of Bat Conservation International. “This research shows that by protecting bat species and their habitats we are not only furthering conservation, but also helping to secure a vital food source for communities worldwide.”

Bats face a variety of threats from humans, such as neighborhoods encroaching on hibernacula or the loss of forests where they feed. And in North America, entire species are increasingly at risk of extinction due to the fast-moving fungal plague known as white-nose syndrome, which has killed about 6 million bats in nine years.

Even if we ignore all the ecological benefits of bats, experts say their economic value alone should compel us to keep them around. By eating moth larvae and other pests, they both protect our food supplies and reduce the need for pesticides, some of which can harm humans as well as helpful wildlife like bees and birds.

“[This research] highlights the importance of maintaining a healthy and high-functioning ecosystem,” says Justin Boyles, a zoologist at SIU and co-author of the new study. “Bats are much maligned, but deserve protection if for no other reason than the ecosystem services they provide to humans.”