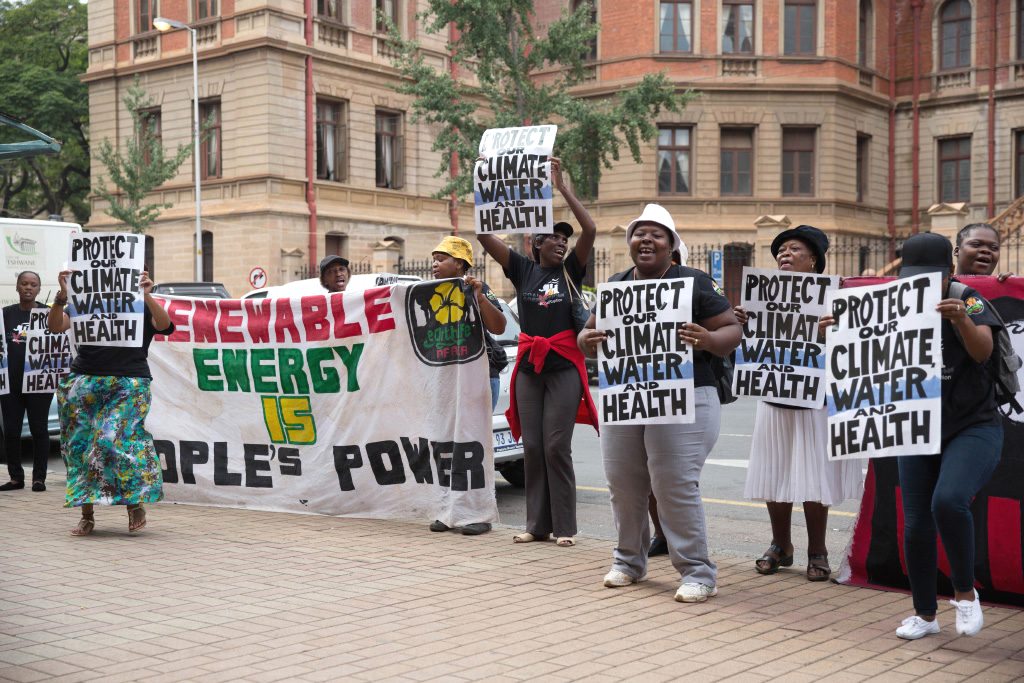 Environmental activists demonstrate outside the court during the hearing of the first Thabametsi coal-fired power station court case in March 2017. Image: James Oatway

In the past week, the Life After Coal Campaign (which comprises: the Centre for Environmental Rights (CER), Earthlife Africa, and groundWork) has instituted fresh court proceedings against the Minister of Environmental Affairs in relation to the proposed Thabametsi independent power producer (IPP) coal-fired power station.

The Campaign has also made further written and oral objections against both preferred bidders under the Coal Baseload IPP Procurement Programme (being Thabametsi, as well as the proposed Khanyisa coal-fired power station) to the National Energy Regulator of South Africa (NERSA) – during public hearings hosted by NERSA on 27 March 2018.

Earthlife Africa and groundWork, represented by the CER, instituted the High Court review proceedings on 26 March 2018 to challenge the Minister of Environmental Affairs’ decision of 30 January 2018 to uphold the environmental authorisation for the proposed Thabametsi coal-fired power station.

The Minister made her decision after considering Thabametsi’s climate change impact assessment, which she had been ordered to do by the Pretoria High Court in the first Thabametsi court challenge judgment of March 2017. Despite the staggering climate impacts of the plant, as demonstrated in the climate change impact assessment, the Minister decided that the high impacts could be justified by the need for additional capacity as set out in the Integrated Resource Plan for Electricity 2010 – 2030 (“the IRP 2010”).

Earthlife Africa and groundWork base their case on the following grounds:

groundWork and Earthlife Africa have sought an order setting aside the Minister’s decision and referring Thabametsi’s authorisation application back to the Department of Environmental Affairs for reconsideration. They have also asked for an order confirming that the National Environmental Management Act and the Constitution require competent authorities to consider site-specific climate change impacts associated with proposed projects; and that they do not permit competent authorities to rely blindly on the IRP 2010 and other policies or Ministerial determinations as determinative of their decision.

As Makoma Lekalakala of Earthlife Africa points out, “it is unacceptable that a plant with such irreversible impacts could be justified by an outdated energy plan which does not reflect the current reality in South Africa – namely that we have excess capacity and that new coal plants are simply too expensive”.

Thursday, 19 April 2018 is the deadline for any notices of opposition – from respondents seeking to oppose the review – and for the record of documents that were before the Minister when she made her decision to be filed with the court.

Last week CER, groundWork, Earthlife Africa, and representatives of community-based organisations also made oral and further written objections to NERSA, opposing the generation licence applications of Thabametsi and Khanyisa. They argued that licensing Thabametsi and Khanyisa would not be in the public interest, as these plants will have significant impacts on human health and the environment and – importantly – that these additional coal-fired power stations are not needed (given that South Africa has surplus capacity) and will cost South Africa more money than feasible alternatives.

“NERSA is legally obliged to make decisions which are in the public interest and in line with the Constitution. This means that NERSA has a duty to uphold and protect the Constitutional right to an environment not harmful to health and wellbeing” says Nicole Loser, attorney at the CER.

There was widespread objection to the licensing of the coal IPPs, from a variety of stakeholders, including from Eskom, which argued that these power stations would place undue financial pressure on Eskom and South Africa.

Jesse Burton of the Energy Research Centre (ERC) showed that, according to modelling conducted by the ERC, the coal IPPs would cost South Africa up to an additional R4 billion annually – this cost will ultimately be borne by the consumer. “Clearly, on this basis alone, licensing the 2 coal IPPs would not be in the public interest. We also know that these power stations will have devastating impacts for our climate and human health.” says Rico Euripidou of groundWork.

However, at the hearings, both ACWA Power Khanyisa Thermal Power Station RF (Pty) Ltd – with partners General Electric and Palace Group – (the developers of the Khanyisa project) and Thabametsi Power Company (Pty) Ltd (the developer of Thabametsi) sought to convince NERSA that the power stations are, in fact, environmentally-friendly and beneficial to the people of South Africa.

The Life After Coal Campaign has asked NERSA to hold public hearings in the affected areas where the power stations will be built – namely Lephalale (Thabametsi) and eMalahleni (Khanyisa) – to ensure that the licensing process is fair and enables participation by those who will be most affected by these plants. It is not known when NERSA will make a finding on the licence applications, or when and whether NERSA will hold further hearings in the affected areas.

The Campaign will continue to oppose all proposed coal-fired power stations, which are unnecessary, expensive, highly-polluting, and disastrous for the climate.