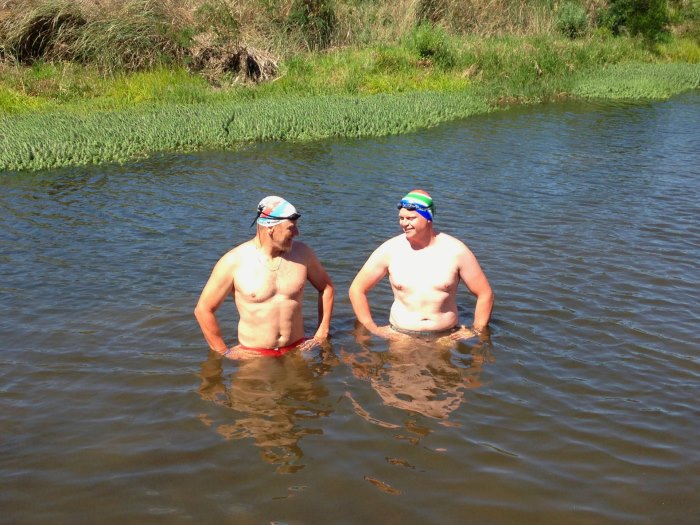 Swimmers Andrew Chin and Henko Roukema in the Berg River in Franschhoek, near the start of their swim last Monday. Image: WESSA

High water pollution levels and exceptionally low flows have forced extreme swimmers Andrew Chin and Henko Roukema to abandon their quest to swim the length of the Berg River.

They had set off on Monday 19 October on an initiative to heighten awareness around the state of our rivers by swimming the Berg from source to sea. Yet the polluted water caused such illness in the team that they were forced to call off the swim after two-thirds completion.

Everyone sick from sewage overflows and other pollution

This unfortunate outcome does, however, reinforce the central message of their “Rivers for Life” campaign, which is that our country’s rivers are in a severe state of deterioration. It is hoped that their efforts will stimulate the critical discussion and action required by the relevant authorities, landowners, affected communities and the general public to save our country’s vital water resources.

While the swimmers had anticipated the many challenges that they would face along the way, even they were surprised by the degraded state of the river caused by sewerage overflows and other pollution sources. After just a couple of days on the river both swimmers fell ill due to exposure to the polluted water, and so did both members of their support team who were also exposed to the water while following them in a kayak and backup vehicle. 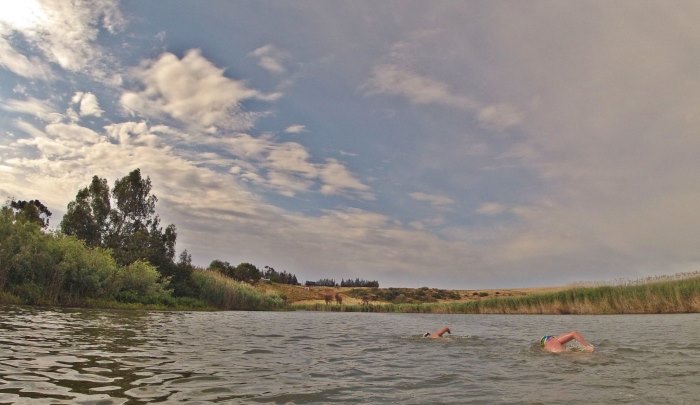 Swimmers Andrew Chin and Henko Roukema swimming in a cleaner stretch of the river at Bridgetown (close to Misverstand Dam). Image: Philip Vail

After hiking to the source of the Berg River at Assegaaibosch Kloof, the swimmers followed the course of the river for six days and completed 135km of the river’s 200km length. Of this distance only 21km were swum while 23km were paddled and the rest walked in often challenging conditions. Numerous sections of the river were impassable due to being blocked by artificial islands made of accumulated plastic waste, while tree branches and shallow water often made swimming impossible and at one point the river also ran completely dry. The catchment had a very dry winter this year resulting in dam and river levels being particularly low. Low water levels also decrease the river’s natural assimilative capacity in terms of pollution.

The swimmers observed vagrants living under almost every bridge in Paarl, and many sections where the river is being used as a dump site. They witnessed huge amounts of water being pumped out of the river and counted more than 50 irrigation pipes leaving the river in one 7km section below Wellington. They were exposed to leeches in the water several occasions, and were extremely concerned to see children playing in the polluted river where it flows past a local township. 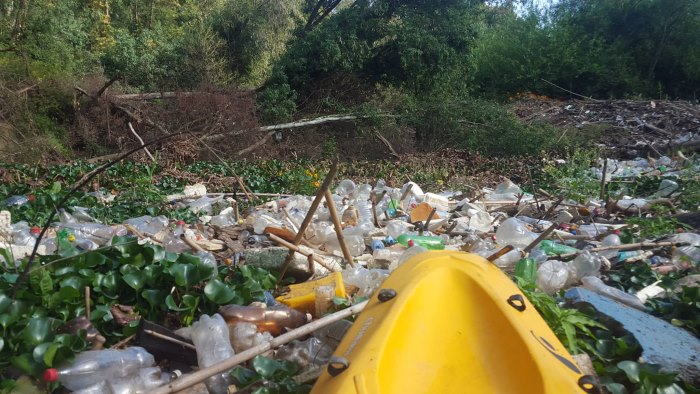 The river, below Wellington and above Gouda, was choked up with pollution, aquatic alien vegetation and dumped cleared vegetation here. Image: Andrew Chin

Two of the few positive observations were seeing extensive clearing of alien vegetation on the river banks and the Department of Agriculture spraying weeds on one section of the river. The local farmers that they encountered along the way were generally very supportive of the swimmers’ initiative.

The Berg River swim was the second event of the “Rivers for Life” extreme swimming challenge that was launched by Capetonian Andrew Chin in January 2015. The challenge involves a small group of athletes that is attempting over a three year period to swim a distance of 100 to 350km in a major river in each of South Africa’s nine provinces. The first swim took place in the Wilge River in the Free State in January 2015, during which Andrew Chin and Toks Viviers swam 200km over a period of 10 days. The pair plan to take to the water again early in the new year to continue the challenge on a major river in one of South Africa’s other provinces.

WESSA strongly supports this initiative, which is in line with the organisation’s aim to promote public participation in caring for the earth. One of the key objectives of WESSA’s water programme is to ensure the health of strategic water catchments and rivers through the monitoring and reporting of the state of our country’s water resources. 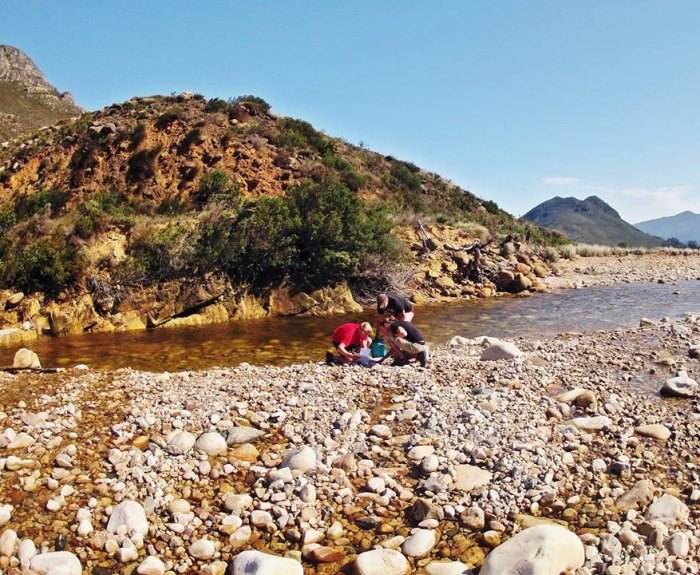 The Rivers for Life team conduct a miniSASS river health test along a cleaner stretch of the river (close to Berg River Dam). Image: Philip Vail

Prior to the event WESSA equipped the swimmers with the skills required to conduct river health tests using the popular miniSASS citizen science tool, which is used to calculate a river health index based on the collection and identification of invertebrates (small aquatic insects) in a water sample. The swimmers collected data using this tool along the stretch of the Berg River that they completed and the results will be uploaded to the Google Earth map and database, where they will contribute to building a picture of the health of South Africa’s rivers.

The swimmers were supported on the Berg River swim by a number of partners and sponsors including AEE South Africa, Awesome South Africans, Aqua 4 Life, Healing Earth Africa, Speedo, Travel with Flair (Cape Town) and WESSA.