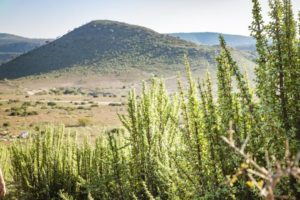 When the goats on his farm had nothing more to eat, the soil had eroded and most of the vegetation had been destroyed, South African farmer Pieter Kruger had to make one of the toughest decisions of his life. “I have always been a farmer,” he says, “but that moment in 2007, I knew that I could not go on. There was no more water. Zandvlakte is the last farm in our valley in the Bavianskloof, and the river had run dry before it reached my farm.”

Pieter reluctantly gave up goat farming, and embarked on the Working for Water programme, a government pilot effort to restore degraded watersheds.

Over the next three years, he and a team of over 100 workers planted 1,500 hectares of his farm with millions of cuttings of an indigenous succulent tree, the spekboom (Portulacaria afra) which can grow well even in dry conditions.

“I have never regretted that decision,” says Pieter Kruger, “the trees are now well established, and in the big flood this year, we managed to keep runoff of water to penetrate the soil… instead of washing away our topsoil into the river.”

In mountainous areas, spekboom trees can grow even on steep slopes. They suck up the moisture quickly and can store it for months. Spekboom forests can serve as grazing and browsing areas of last resort for wildlife and livestock, even when all else has withered in a drought.

Spekboom, which absorbs carbon dioxide from the atmosphere faster than most other trees in dry conditions, is the dominant tree of the thicket ecosystem that used to cover up to 5 million hectares across the dry areas of the Eastern Cape, until about 200 years ago, when massive overgrazing by goats and sheep started.

“Spekboom is an amazing plant. It can take root and regrow, just from simple cuttings from existing trees. It can quickly reform the soil because it continuously sheds a lot of leaves, which help to build up soil organic carbon,” explains ecologist Anthony Mills, who has published extensively on the sub-tropical thicket ecosystem of South Africa, one of the country’s lesser known plant biomes. 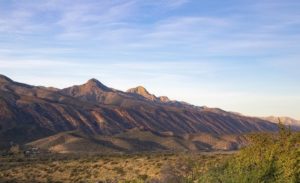 The South African Government sees thicket restoration as one of the low-hanging fruits for the achievement of national climate and biodiversity goals and recognizes that private investments are key. In 2007 it started what is arguably the largest ecological experiment in the world. “We have studied this thoroughly, and we believe there are big opportunities for ecosystem restoration investments across South Africa,” says Christo Marais, Chief Director at the Department of Environmental Affairs, which runs the programme.

The goal is to restore an area of thicket of over one million hectares, almost 200 times the size of Manhattan, providing work and income for thousands of people, for several years.

One of the next steps in scaling up the restoration could be to establish carbon markets—where governments, businesses or individuals purchase carbon credits in exchange for growing plants and trees—and livestock farms, where several thousand hectares can be replanted with spekboom, and where income from carbon credits can be combined with other income streams. 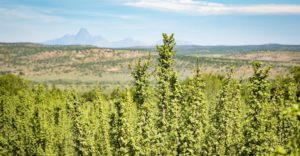 “Farmers like to look over the fence, and see what their neighbour is doing,” says Pieter Kruger. “Having big demonstration plots on existing farms is important to spread the word that becoming a carbon farmer can pay off, both for restoring the land, and for making a decent return from the land,” he adds.

“We are running out of time for climate and biodiversity action, and large-scale opportunities like thicket restoration in South Africa must be urgently explored,” says Tim Christophersen, head of UN Environment’s Freshwater, Land and Climate Branch, and Chair of the Global Partnership on Forest and Landscape Restoration.

“We would like to support the Government of South Africa and other partners, like Living Lands and Commonland, to realize the potential of the Eastern Cape thicket restoration, as we move into the UN Decade on Ecosystem Restoration 2021–2030.” 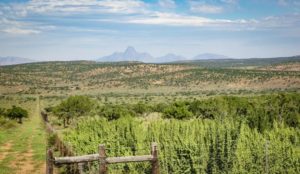