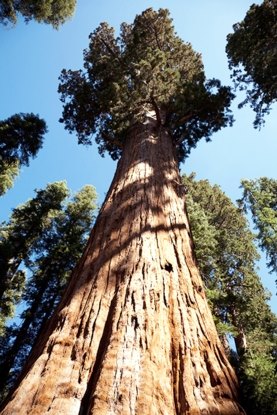 National forests whose names come from their large, majestic trees—such as Redwood National Park and Sequoia National Park in California—may need to rethink their brands as droughts increase in frequency and severity in many regions around the world due to climate change. New research published this week in the journal Nature Plants finds it’s the large trees that suffer most and are first to die.

The four-person team of researchers conducted a global analysis of how forests respond to drought using already published and vetted inventory data from 40 drought events in 38 forests across the globe. In every case, large trees showed a decrease in how fast they grew, and drought-related tree death increased with tree size in 65 percent of the droughts examined.

“It shows us that this is really a pretty general trend,” said Kristina Anderson-Teixeira, a staff scientist with the Smithsonian Conservation Biology Institute and the Smithsonian Tropical Research Institute and senior author of the paper. “It tells us that biophysical principles make drought tougher on large trees.”

Physics and gravity are factors large trees have to deal with. Imagine trying to suck up water from a straw that is 5 feet tall versus a few inches, said Nathan McDowell, a researcher with the Earth and Environmental Sciences Division at the Los Alamos National Laboratory in New Mexico.

“Being tall, it’s harder to suck water,” said McDowell, a co-author of the paper. In fact, he said, big trees do a lot for a forest ecosystem that their smaller counterparts cannot. Some species, such as the spotted owl, only live in big trees. Large trees provide shade for the forest ecosystem and keep the understory of forests cool and more humid.

Big trees also capture a disproportionate amount of carbon dioxide, making them potential boons in the battle against a changing climate. The authors found that when trees are exposed to drought, not only are climate-stressed trees less likely to take in as much carbon, but when they die, they release large amounts of stored carbon into the atmosphere.

“Plants can’t go to the local 7-Eleven and get something to drink—they’re stuck there,” he said. “The way they deal with dry conditions [is] they close their stomata, holes in leaves that allow water to escape and capture CO2.”

The equivalent metaphor would be if a human could stop sweating when water was scarce, he added. The trade-off, however, is that if a tree does this for an extended period of time, it begins to run out of carbon or experience what is called “carbon starvation.” Scientists think trees don’t die from not taking in carbon, but rather it weakens the tree’s defenses and makes trees more susceptible to predators like bark beetles.

This week, officials in California reported that the number of dead trees in California has soared to 25 million, the result of drought and diseases exacerbated by lack of water (Greenwire, Sept. 28). At least 12 million trees in the state have been killed as bark beetles take advantage of their weakened state. Bark beetles also prefer large trees, the study notes.

William Anderegg, a postdoctoral fellow at the Princeton Environmental Institute who was not associated with the research, said the paper presented nice preliminary data on how larger trees seem more vulnerable to drought.

“Understanding which trees in the forest are most vulnerable to drought is quite important for understanding whether [they will] continue to act as a strong carbon sink in a rapidly changing climate,” he said in an email.

Anderegg’s own work, including a study published in July in the journal Science, found that forests absorb less carbon for four years after a drought.

He added that the paper was valuable but represents a small sample size, and that more work is needed.

McDowell said the paper adds to a growing body of science that is fueling concern for old, large trees. Although some forest management strategies could be helpful, such as forest thinning and controlled burning in appropriate places, those are merely bandages, he said.

“Do we predict all trees are going to die? Maybe it’s 80 percent,” he said. “The bottom line is we can’t just limit CO2 emissions. We have to stop carbon emissions totally. It’s good our governments are making progress, but it’s just a drop in the bucket.”