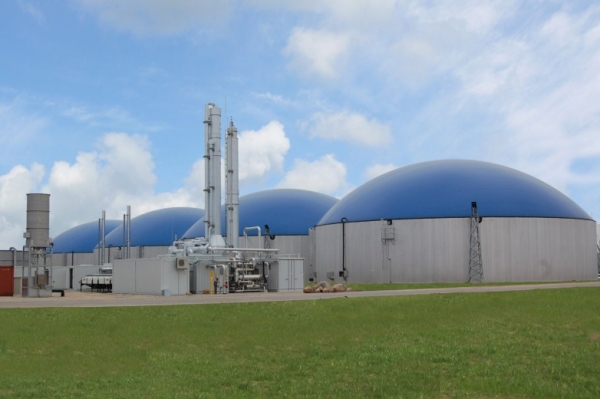 From the economic, ecological and technological perspective, biomethane is the energy source of tomorrow. The commissioning of the biomethane refinery in Arneburg, Saxony-Anhalt, Germany, underlines this statement. The plant, which reflects the entire know-how of the industry, stands in stark contrast to the abandoned nuclear power plant building site next door, a vivid reminder of an era of conventional energy production.

After a building time of only eight months, one of Germany‘s largest biomethane refineries has gone live in the Altmark Industrial and Commercial Zone and has been supplying the public grid since May. With four digesters of 4,900 m3, six digestate storage units of 5,000 m3 and a liquid reservoir, the plant of the operator Nordmethan from Vechta, Lower Saxony, produces 1,650 standard m3 of raw biogas an hour. 250 m3 of this raw material are used for the heat needs of the plant, which was designed by Weltec Biopower.

By means of chemical amine treatment, the gas is converted into about 700 standard m3 of processed biomethane an hour, with a methane content of 99 percent – enough to supply 5,000 homes with power and heat. For this purpose, a solid matter dosing feeder loads maize silage, whole-plant grain, sugar beets as well as dry chicken dung, chicken manure, liquid manure and water as substrates into the stainless-steel digesters. In total, the substrates delivered by local farmers amount to more than 70,000 t a year.

As Altmark is a region traditionally characterised by agriculture, with a high proportion of grassland, the plant site is attractive, and the raw material supply is secured. This is one of the reasons why since 2009, the Federal Ministry of Food, Agriculture and Consumer Protection (BMELV) has been promoting this historical cultural landscape with a special regional development concept as one of Germany‘s 25 bioenergy regions.

Another strategic advantage: The Industrial and Commercial Zone boasts an exceptionally good traffic infrastructure connection that facilitates the transport of substrate and digestate to and from the site. Thanks to these optimum framework conditions, other companies that also depend on plant materials have also settled here; for example, the cellulose producer Zellstoff Stendal produces several thousand tons of cellulose a year primarily from tree bark. The production waste is converted to energy in the company‘s own biomass power plant, one of the most powerful and efficient of its kind in Germany.

Like a monument to how energy used to be produced in the past, the abandoned building site of the Stendal nuclear power plant, which was supposed to become the largest nuclear power plant of the German Democratic Republic back in the 1970s, is located in the immediate vicinity of the Weltec plant and the biomass power plant. The work on this site, which used Russian technology, was stopped in March 1991, after the building costs had exceeded Deutsche mark 7,000,000/MW (3,58 Millions Euro) and serious security deficiencies had been detected.

The coal-fired power plant in Arneburg, which had been planned a few years ago, would also have been threatened by decay. The building project was suspended after local initiatives had protested against the plant for years.

In contrast, the future belongs to plant concepts such as the biomethane refinery in Arneburg, which ensure sustainable energy supply and create jobs:

“The biomethane refinery in Arneburg demonstrates that we must provide the right answer to the growing demand for biomethane for the various utilisation paths. This sustainability is also highlighted by the fact that Nordmethan GmbH has created ten regular jobs and two training jobs“, says Jens Albartus, Director of Weltec Biopower.