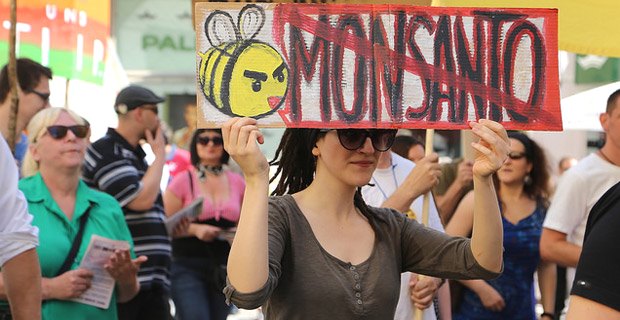 Dare to publish a scientific study against Big Biotech, and Monsanto will defame and discredit you. For the first time, a Monsanto employee admits that there is an entire department within the corporation with the simple task of ‘discrediting’ and ‘debunking’ scientists who speak out against GMOs.

The WHO recently classified glyphosate, a chemical in Monsanto’s best-selling herbicide Roundup, as carcinogenic – news that is really heating things up with biotech. So Monsanto has been demanding that the World Health Organization (WHO) and the International Agency for Research on Cancer (IARC) retract their statements about the poisons’s toxicity to human health.

The company demands this even though a peer-reviewed study published in March of 2015 in the respected journal, The Lancet Oncology, conducted a analysis proving that glyphosate was indeed ‘probably carcinogenic.’

“We question the quality of the assessment. The WHO has something to explain.”

It has already been explained, Mr. Miller. The study states:

“Glyphosate is a broad-spectrum herbicide, currently with the highest production volumes of all herbicides. It is used in more than 750 different products for agriculture, forestry, urban, and home applications. Its use has increased sharply with the development of genetically modified glyphosate-resistant crop varieties. Glyphosate has been detected in air during spraying, in water, and in food. There WAS limited evidence in humans for the carcinogenicity of glyphosate.

Glyphosate has been detected in the blood and urine of agricultural workers, indicating absorption. Soil microbes degrade glyphosate to aminomethylphosphoric acid (AMPA). Blood AMPA detection after poisonings suggests intestinal microbial metabolism in humans. Glyphosate and glyphosate formulations induced DNA and chromosomal damage in mammals, and in human and animal cells in vitro. One study reported increases in blood markers of chromosomal damage (micronuclei) in residents of several communities after spraying of glyphosate formulations.”

In a recent talk attended mostly by students hoping to get decent paying internships in their field, a student asked what the company was doing to negate “bad science” concerning their work.

Monsanto’s employee, Dr. William “Bill” Moar, who gives talks on Monsanto’s products to reassure everyone that they are safe, perhaps forgot the event was public when he openly revealed that Monsanto had:

“An entire department” (waving his arm for emphasis) dedicated to “debunking” science which disagreed with theirs.”

Likely, this is the first time a Monsanto employee has publicly admitted that they have immense political and financial weight to bear on scientists who dare to publish against them. Of course they don’t list this discrediting department anywhere on their website.

The company will stop at nothing to discredit and devalue the contributions of unimpeachably respected Lancet and the international scientific bodies of WHO and IARC, among others.

The stakes are high – after all, an entire industry of GMO seed (for which they currently hold more than a three-fourths monopoly share) is based on being Roundup ready. Glyphosate is their hallmark product, and it accounts for billions in sales when you account for the seed they sell to go with their best-selling herbicide.

In a single publicly made phrase, Moar has admitted that the Monsanto-funded science is sheer propaganda – essentially that they indeed have dozens, if not hundreds of employees out making sure that no science which tells the truth about their cancer-causing products ever garners any credibility whatsoever in the information age.

Monsanto has also held up the findings of regulatory bodies, particularly in the United States where the revolving door between agrochemical corporations and government seems never ending.