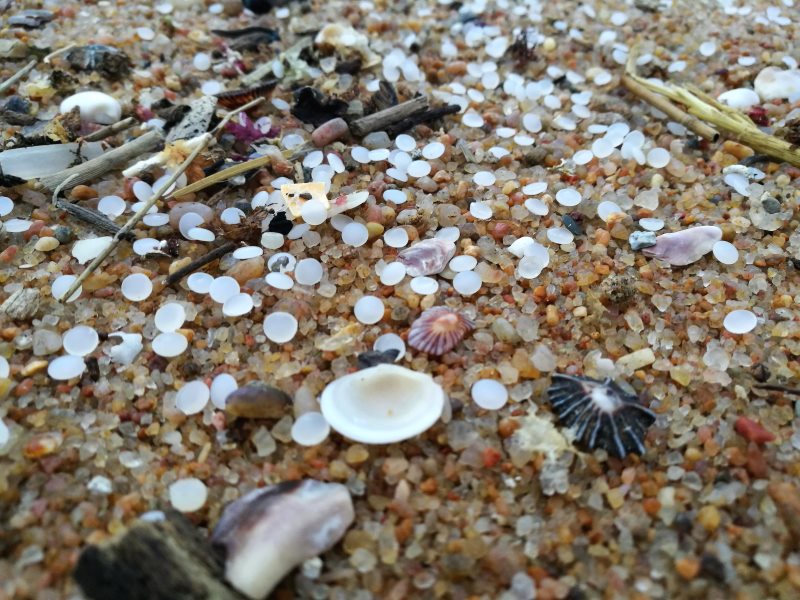 On the 19th of October 2017, during a particularly intense storm, 2 ships collided in Durban Harbour and at least 49 tons of plastic nurdles were lost into the Port from the MSC Susanna and subsequently into the ocean. This is the largest plastic pollution event in South Africa’s history, with over 2 000 000 000 plastic pellets being released.

The initial response to this event was very slow. Authorities focused on recovering the ships that had broken loose in the harbour, clearing debris and restoring Port operations.

Within a few days, the SAAMBR team (South African Association for Marine Biological Research), who are based close to the Port, started noticing significant volumes of nurdle pellets washing up on the local beaches.

They also began receiving calls from concerned residents, querying the sudden appearance of thousands of plastic pellets on the beaches, estuaries and in the surf zone. The SAAMBR team then launched an awareness and action campaign that has galvanized one of the largest plastic clean-up efforts in South Africa’s history.

“It was so encouraging to see the response of local people. From pre-school teachers to surfers, dog walkers to the media, many people responded to our call for help,” said Dr Judy Mann-Lang, Conservation Strategist at SAAMBR.

“The response showed us the incredible power of collective action, and that this action can be galvanised if people are appropriately empowered.”

On the 27th of October, the Department of Environmental Affairs (DEA) announced that the South African Maritime Safety Authority (SAMSA) had issued a directive to the Mediterranean Shipping Company (MSC) to take full responsibility for the nurdle clean-up operation. Drizit Environmental were subsequently appointed to enable the clean-up, with an initial focus on the Harbour and surrounding beaches. They subsequently expanded this effort to include areas where high volumes of nurdles were being reported, with over 200 local community members currently employed to enable this collection.

However, it soon became apparent that the nurdle spill was turning into an unprecedented environmental disaster, with the nurdles appearing on beaches and estuaries along the entire Kwa-Zulu Natal Coast, and on Eastern Cape and Western Cape beaches as far south as Mossel Bay.

DEA recognized this and tasked their Working for Coast teams wide to prioritize the collection of nurdles. In addition, they have mobilized over 200 additional workers to support this clean-up, and are expanding progressively along the coastline. The DEA response is driven by their deep concern that the nurdle spill could lead to the death of fish and birds that eat the nurdles, believing them to be food. Not only can the nurdles block digestive systems, but as they absorb chemicals they become toxic.

“The Department is aware that the incident resulted in widespread local volunteer-based clean-up initiatives across the Kwazulu-Natal province and subsequently the Eastern Cape. It is our view that these proactive initiatives are a demonstration of the high levels of environmental concern and awareness expressed by coastal communities. To ensure the cleanliness of beaches during the forthcoming festive season, 196 additional beneficiaries dedicated to deal with the plastic nurdles clean-up along the coast have been employed for a period of 3 months (November 2017- January 2018),” commented Zolile Nqayi, spokesperson for the Department of Environmental Affairs (DEA).

The combined Drizit and DEA Blue Army is joined daily by hundreds of concerned citizens, spontaneously collecting the nurdles and other plastic accruing along our Coast. WILDOCEANS is working with SAAMBR, DEA and the KZN Waste Network to co-ordinate and direct the efforts of this rapidly growing Blue Army.

Rachel Kramer, the WILDOCEANS Nurdle Response Co-ordinator, believes “the nurdle spill has reignited awareness around plastic pollution on beaches, and the response from civil society has been outstanding. Combining clean-up efforts is essential to track and mobilize the growing issue.”

There is no doubt that the nurdle clean-up efforts will need to continue for months, with only 5.4 tons having been recovered after 9 weeks, out of the 49 tons originally lost to sea. The nurdle spill has also highlighted the incredible volumes of plastic flowing down our rivers and into the sea, accruing on beaches, clogging our estuaries and Mangrove forest systems and killing 1000’s of marine animals.

If you would like to help, place any nurdles you collect in a sealed bag and take them to your nearest drop-off point.

Please note that nurdles should not be disposed of in general waste as the risk is that they end up on landfills and ultimately back in our oceans.