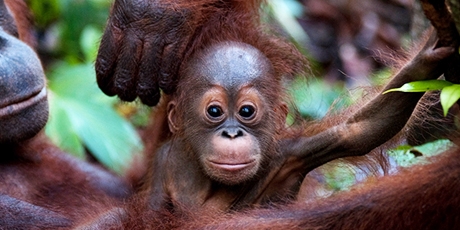 The world’s orangutans are hanging on by a thread, with scientists warning we don’t have much time left before they’re extinct. Now Avaaz has a brilliant plan that could save them, if we all chip in what we can.

There’s a crucial corridor connecting two essential orangutan habitats in the wetlands of Borneo that is on the brink of destruction. Saving this land could be the difference between life and death for countless orangutans, who need continuous swaths of forest and trees to survive.

Conservation NGOs and local groups have fearlessly announced they will buy the land and protect it for good, but to do it they need enough money to beat out profit-hungry companies looking to move in and destroy it.

People power can make it happen

This is exactly the kind of moment the Avaaz community was made for — our unique, people-powered funding model could allow us to finance the crucial sanctuary quickly, and create a fund to defend other key pieces of land around the world.

Orangutans are some of our most intelligent, thoughtful relatives — their name means “person of the forest” in Malay. They spend 90% of their time roaming and climbing trees (the males can stretch their arms up to 7 feet!) — even sleeping high up in nests of leafy branches, and they use big leaves as umbrellas when it rains.

So, as demand for palm oil skyrockets and companies rush to clear more and more land, their homes are literally falling like dominoes.

Allowing the world’s orangutans to die out would mean not only losing one of the planet’s most majestic creatures forever, but would also change the entire ecosystem of the rainforests they inhabit. As they roam the forest eating fruit, orangutans scatter the seeds far and wide, helping the entire forest stay healthy and robust.

In Borneo, where 80% of the orangutans’ habitat has already been destroyed, even a small area of land can make a massive difference as it can link together protected forests that have survived. That’s why this plan to save the orangutans is so powerful — by connecting a forest reserve with a wildlife sanctuary, we can get the most from every cent raised.

Pledge now to help these creatures

Click here to pledge, and if we raise enough money we can give the local groups the money they need to buy the land — and create a rapid-response fund we can use at a moment’s notice to defend wildlife populations from critical threats.

Time and time again, the Avaaz community has come together to protect forests and critically endangered species, from the Amazon in Ecuador and Brazil, to elephants, rhinos and lions threatened by poaching.

Last year, nearly 1.5 million of us came together to call on the Indonesian government to protect its precious orangutan population. Now, we have a chance to make a massive difference in Malaysia, before even one more precious orangutan dies.