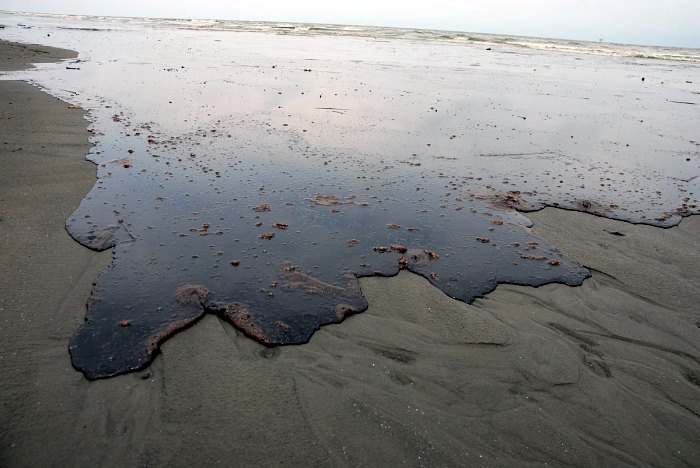 Louisiana’s coastal marshes will be the key focus of $8.8 billion BP will pay to restore vast natural resource losses caused by the Deepwater Horizon oil spill in 2010, part of a $20.8 billion settlement with federal and Gulf state governments announced Monday (Oct. 5).

“This investment of funds particularly focuses on restoring Louisiana coastal marshes as an essential element of the preferred alternative,” said the Damage Assessment Restoration Plan released Monday by the trustees.

Coastal and nearshore habitat restoration is more important to restore

“Given both the extensive impacts to Louisiana marsh habitats and species and the critical role that these habitats across the Gulf of Mexico play for many injured resources and for the overall productivity of the Gulf, coastal and nearshore habitat restoration is the most appropriate and practicable mechanism for restoring the ecosystem-level linkages disrupted by this spill,” the document said.

But the report said that while coastal and nearshore habitats are significant,”aspects of this vast and diverse injury will require additional restoration, especially to those resources that spend some or all of their lives in the open waters of the Gulf of Mexico.”

The announcements were made as officials and experts unveiled the final version of the comprehensive settlement of federal and state claims against BP for the oil spill. Federal and state trustees also released their “Damage Assessment Restoration Plan” and environmental impact statement required under the federal Oil Pollution Act of 1990.

The settlement agreement and restoration plan are subject to a 60-day public comment period that will include hearings in New Orleans and Houma.

Gargantuan damage due to 134 million gallons of oil

The restoration plan and impact statement stressed the immensity of the uncontrolled release of 3.19 million barrels of oil – 134 million gallons – into the Gulf of Mexico and its effects.

“The volume of oil discharged during the Deepwater Horizon spill was equivalent to the Exxon Valdez oil spill re-occurring in the same location every week for 12 weeks,” the restoration plan said.

The report said the injuries caused by the spill “cannot be fully described at the level of a single species, a single habitat type, or a single region.

This was an ecosystem-level injury

“Rather, the injuries affected such a wide array of linked resources over such an enormous area that the effects of the Deepwater Horizon Spill must be described as constituting an ecosystem-level injury.” 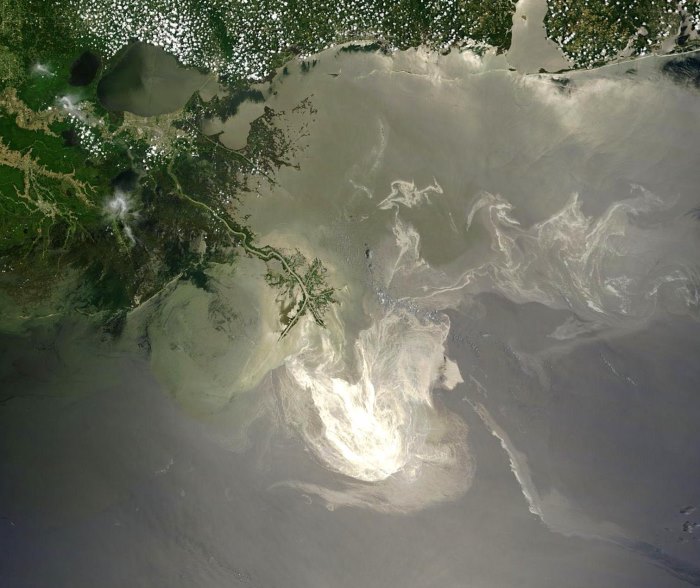 The oil slick as seen from space by NASA’s Terra satellite on 24 May 2010.

According to the resource restoration plan, the BP spill’s surface slick covered at least 43,300 square miles over 113 days in 2010, contaminating an estimated 75 billion cubic yards of Gulf water — an amount equal to 40 times the average daily discharge of the Mississippi River at New Orleans.

The report estimated Gulf resources destroyed by the spill include billions of fish, oysters and invertebrate species; tens of thousands of birds; close to 200,000 sea turtles; and more than half the bottlenose dolphins in Barataria Bay and the Mississippi Sound.

To both restore the damage and to compensate for the lost recreational opportunities by the spill, the plan recommends a portfolio of restoration projects that focus on coastal and nearshore habitat restoration, including improving water quality in priority watersheds.

The complex damage assessment process included several stages, which was one reason it took five years to complete, the report said.

During a pre-assessment phase, scientists gathered baseline pre-spill information on the area that was injured, even as they were collecting information on the impacts of the spill. That process included assessing the oil’s impact over 1,300 miles of shoreline habitat, visibly oiled and dead birds, sea turtles and marine mammals, lost recreational opportunities, and impacts to resources living in the water column in the Gulf. 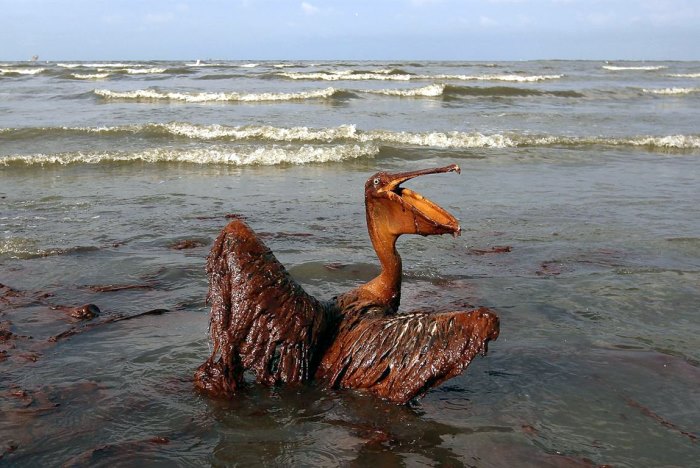 A restoration planning phase included an assessment of injuries to both natural resources and the human recreational services they provide, which required the development of several hundred individual scientific assessment studies.

Even as the assessments were underway, federal agencies and the states also conducted some emergency restoration projects, in part funded by a $1 billion advance payment from BP. As of October, these early restoration program included 64 projects totaling $832 million. 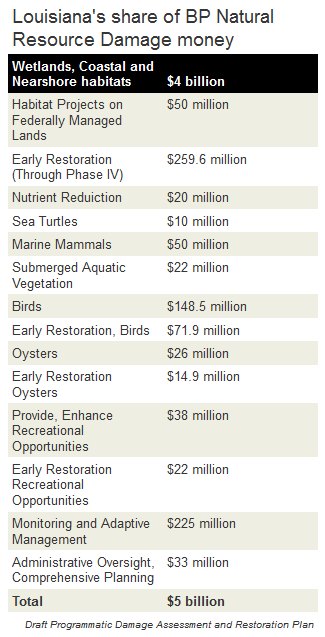 The plan released Monday is “programmatic,” meaning it recommends broad outlines for the types of restoration projects to be funded, but leaves the specifics to future decisions to be made by federal-state teams of trustees.

However, it emphasizes restoration in areas known to be injured by the spill, including Louisiana.

The plan gives general outlines for the types of projects it expects to be built, rather than recommendations for individual projects. Many of the recommendations, however, mirror proposals made by Louisiana officials and are in line with the restoration portion of the state’s coastal Master Plan.

It also recommends the continuation of an early restoration plan to rebuild oyster reef habitat and oyster spawning programs. The plan also recommended restoration of submerged aquatic vegetation, including along Louisiana’s Chandeleur Islands, and the acquisition of some land for coastal and marine conservation purposes. 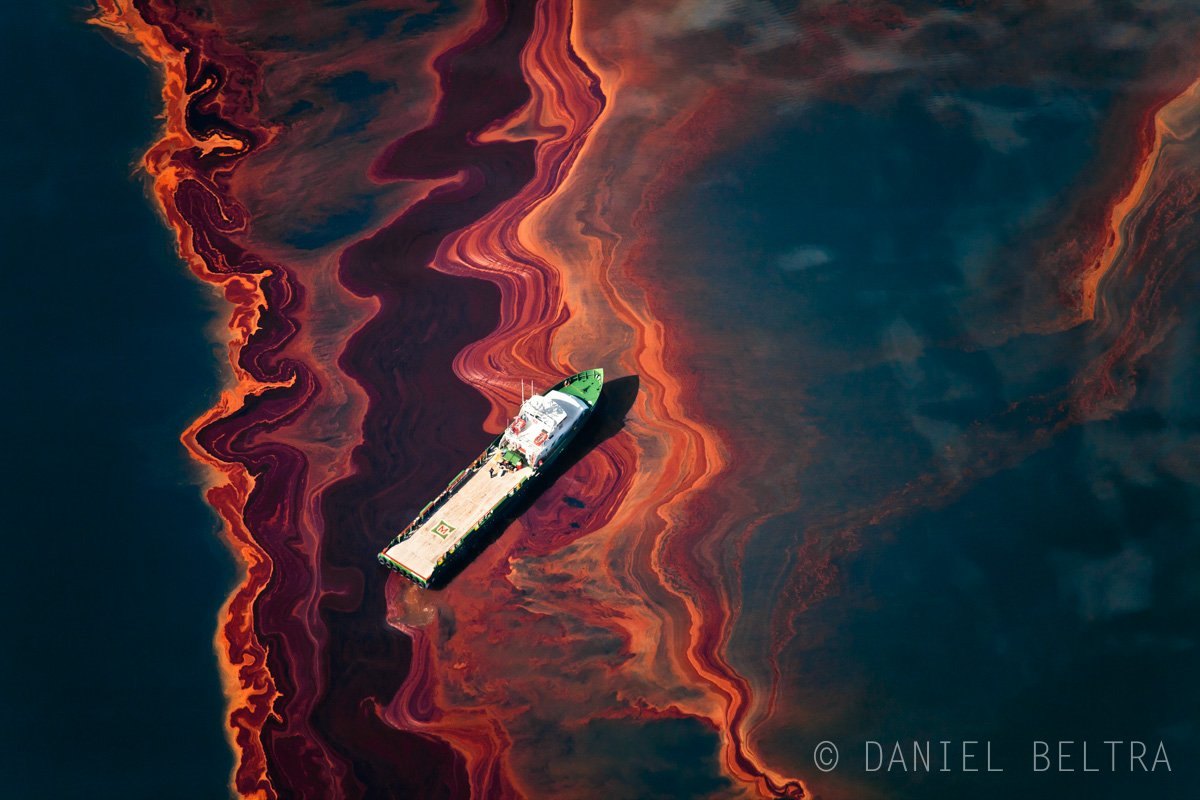 In the Deepwater area, the plan recommends a variety of approaches for restoring lost fisheries, including reducing the impact of “ghost fishing” by paying to remove derelict fishing gear. It also suggests reducing catches of untargeted fish species by commercial fishermen by replacing their gear with new hooks that are targeted to more populous species.

Voluntary programs would be supported to promote reduction in menhaden catches and to provide Gulf shrimpers with more selective gear for their nets to reduce bycatch.

Projects must be approved by feds, state teams

Individual projects paid for with the $5 billion set aside for Louisiana must be approved by a new Louisiana “trustee implementation group” made up of federal and state agencies.

Louisiana also will get more than $787 million in Clean Water Act penalties as part of the settlement, with most of that money also targeted for coastal restoration. That money is being administered under the federal Restore Act by the Gulf of Mexico Ecosystem Restoration Task Force, a body also made up of the federal and state BP spill trustees.

Some of the estimated totals of damage in the assessment are staggering. The trustees estimated the spill killed 2 trillion to 5 trillion larval fish, as well as 37 trillion to 68 trillion invertebrates, in surface waters. They also said between 86 million and 26 billion fish larvae and between 10 million and 7 billion planktonic invertebrates were killed in deeper waters.

“The larval loss likely translated into millions to billions of fish that would have reached a year old,” the report said. “Larval fish that were killed but would not have survived to age 1 are also a significant loss; they are an energy source for other components of the ecosystem.” 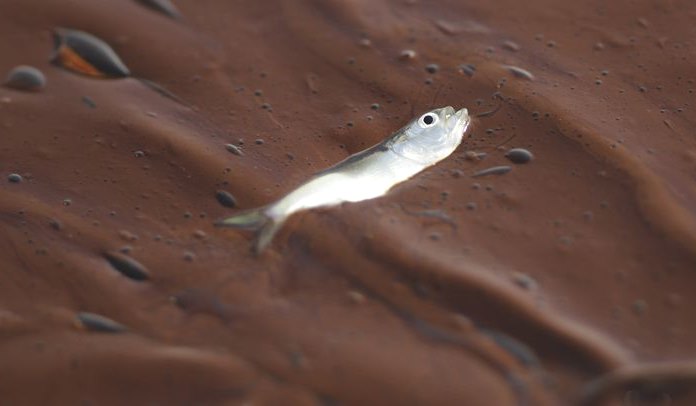 The damage extended to nearly all stocks of marine mammals that overlap with the oil spill footprint, including bottlenose dolphins and Bryde’s whales.

“The Barataria Bay and Mississippi Sound bottlenose dolphin stocks were two of the most severely injured populations, with a 52 percent and 62 percent maximum reduction in their population sizes, respectively,” the report said.

The report also sets aside $15 million for Gulf-wide efforts to preserve the endangered Gulf sturgeon.

By Mark Schleifstein. Source: The Times-Picayune