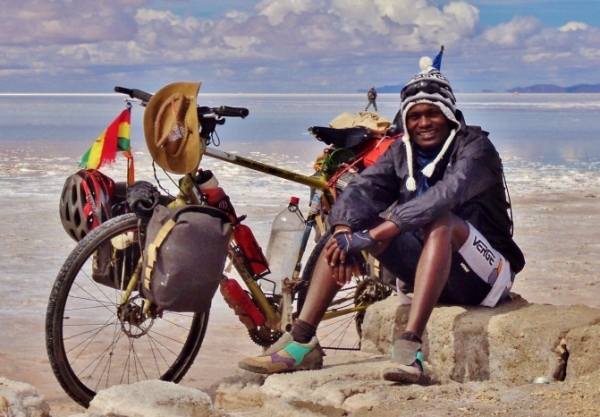 Twenty-five-year-old Tanzanian conservationist Elvis Munis recently cycled from Mexico to the United States, raising funds to set up a scholarship for Tanzanian students to study conservation and resource management. His fundraising goal is 100 000 US dollars. The Tanzania Wildlife Research Institute (TAWIRI) will administer the scholarship.

Elvis began his trip in Chile and is planning to cross the entire world by bike. The journey so far has not been without its trials. He was refused a visa in Columbia and forced to fly into Mexico to continue his journey northward. Elvis’s journey of around eighty thousand kilometres will end on the slopes of Kilimanjaro, his childhood home.

Along the trip, Elvis has improved his Spanish and Portuguese, and has spoken to locals about many environmental and social issues in the areas he has passed through. In Brazil, he visited Nova Mutum Parana, a project to house people relocated due to the construction of the Jirau Dam. On world environment day, he was part of an organised celebration in Manaus, starting the day with a group cycle to promote bike transportation and regional sustainable development.

A ‘can do’ approach goes a long way

Elvis’ passion for conservation is married with an enthusiastic ‘can do’ attitude and pragmatic approach. In Bolivia: ”It takes two riding days to cover 228km from Oruro to the city of La Paz. Oruro is 3709m while La Paz is 3660m. The road that goes through the altplano almost certainly went to 4000m at some points, as breathing became difficult in the long climbing…”

“There was a trench cross the road, lined up with pieces of rail which are wide enough to let a 19” tire go through. My front tire went in, and the bike crashed while I flew forward and hit the pavement. It was the worst crash I’ve ever had. The tube burst and the fork bent backwards… I spent 1 hour fixing the bike to finish the last few kilometres”

“With this kind of travel you learn that the beauty is in the simple thing. I always find something amazing to fill the curiosity, to learn from… simply a landscape, villages, towns, people”

As well as setting up a scholarship, another goal of the trip is to foster environmental awareness and inspire other young Africans.

“The history of Africa sort of betrays Africa. Many people think, since the time of slave trading, colonialism, and neo-colonialism that we’re not in the same shoes as other people. We don’t have much inspiration.

We can see when Barack Obama became the president of US, even though he has little connection with Africa, it is like he has become the president of Africa. You can see how Africa celebrates these kinds of things. It shows us we can do it. We can be like any other person. Mentally Africa is still in slavery. They need inspiration. They need a sign to show that Africa can be proud of themselves… you know someone who did someone like this. So I’m trying to be an inspiration for my people of Africa. Most of the young people still need a lot of inspiration; they need to be told this is how things can be done.”

More detail on Elvis’s background and details of his project have recently been captured on video. Members of the public are welcome to join for some of Elvis’ journey, to make contact and meet him along the way and to donate to the conservation educational scholarship he is creating.