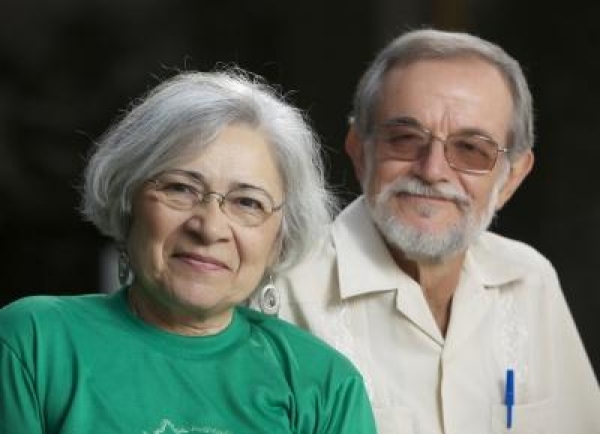 A Brazilian husband-and-wife team of conservationists have won this year’s prestigious National Geographic Society/Buffett Award for Leadership in Conservation. To do this, they created a 5,000-acre protected forest reserve and a Ugandan conservation manager who supervises all the protected areas and wildlife reserves in his country.

They received their $25,000 prizes at a ceremony at the National Geographic Society in Washington, D.C., on Wednesday, June 9. Established through a gift from the Howard G. Buffett Foundation, the awards acknowledge the winners’ outstanding work and lifetime contributions that further the understanding and practice of conservation in their countries.

‘It is an honor to participate with National Geographic in recognizing two remarkable individuals who have made personal sacrifices for the benefit of their countries,’ Howard Buffett said. Becker received his Ph.D. in entomology, focusing on the study of Lepidoptera (butterflies and moths). He spent his career in this field, authoring more than 100 publications and amassing one of the largest collections of neotropical moths in the world. Souza, a school teacher, met Becker in 1968 when he was working at the Instituto BiolÃ³gico in SÃ£o Paulo. They married the following year.

While carrying out field work throughout Latin America, Becker witnessed firsthand the rapid and drastic destruction of natural habitats. He concluded that there was no point in preserving pinned specimens in museum collections if nothing was being done to preserve the species in nature. For Becker – and Souza – this meant preserving habitats for conservation, biological research and environmental education. Since Becker retired in 1997 as research scientist with the Brazilian Ministry of Agriculture, he and Souza have dedicated their lives to conservation.

The Atlantic Forest is one of the most diverse biomes in the world and the most destroyed in Brazil – only 8 percent of its original forests remain. Becker and Souza decided to establish a reserve in this region and settled on the Serra Bonita Mountain. Serra Bonita not only had very high diversity, but also had species not previously known to the Atlantic Forest. Additionally, most of the mountain was still covered with forest (nearly 50 percent pristine), and there was no other sample of cloud forest preserved in the region.

Using their retirement benefits and savings, Becker and Souza began buying land in 1998, one piece at a time. By mid-2001, nearly 50 properties had been purchased, amounting to over 2,500 acres. As the project expanded, they created the UiraÃ§u Institute, an NGO, and eventually established the larger Serra Bonita Reserve Complex. Today this protected area covers nearly 5,000 acres.

The reserve houses a research center composed of six laboratories, two collection rooms, an auditorium, a library and a preparation room. Also on the reserve is a lodge to accommodate scientists, students and ecotourists, and more than 6 miles (10 km) of trails. John Makombo studied environmental science and natural resource management at Makerere University before joining the Uganda Wildlife Authority as a park warden. He is now a chief conservation area manager for all of the national parks and wildlife reserves in Uganda.

Early in his career Makombo spearheaded the protection and restoration of the mountain ecosystem and biodiversity of the Rwenzori Mountains National Park. He focused on community involvement and anti-poaching operations and promoted sustainable resource harvest and watershed management, thus ensuring the local population supported conservation. Building on these experiences, he implemented a landscape concept for Semliki Wildlife Reserve and nearby Semuliki National Park as a single conservation area management unit. This concept of park management is now widely used throughout Uganda, in seven conservation areas comprising 10 national parks and 12 wildlife reserves plus a number of community wildlife areas and sanctuaries.

In Bwindi Impenetrable National Park, home to half the world’s mountain gorillas, Makombo worked to change the perception of the local communities of the gorillas and their habitat. He led conservation education crusades to educate the community about the importance of gorilla protection, designed and implemented community conservation projects and developed tourism activities. Using his community networks, he secured a 1.6 square-mile (4.2 square-km) buffer zone on the southern part of the park where the mountain gorilla was viewed negatively due to its crop-raiding behavior, thus saving part of the population of this critically endangered primate.

He also looked beyond Uganda’s borders, serving as president of a cross-border coordination committee for Virunga National Park (Democratic Republic of the Congo), Volcanoes National Park (Rwanda) and Mgahinga Gorilla National Park (Uganda), to improve forest conservation and gorilla protection in the three countries. His efforts led to a comprehensive tripartite government agreement that has resulted in a trans-boundary collaborative arrangement to protect this important landscape.

Makombo also secured support for elephant conservation at Murchison Falls National Park from the International Fund for Animal Welfare that saw the design and establishment of problem animal interventions that greatly controlled crop destruction by elephants and set the stage for improved community attitudes toward the conservation of elephants.

He also spearheaded the design of a climate change and oil impact monitoring project for the Rwenzori Mountains and the Albertine Rift respectively, which gained support from the MacArthur Foundation.

‘This year’s awardees are recognised for their outstanding leadership and the vital role they play in managing and protecting the natural resources in their regions. They are inspirational conservation advocates, who serve as role models and mentors in their communities,’ said Thomas Lovejoy, chairman of the Conservation Trust.

Dedicated to the conservation of the world’s biological and cultural heritage, the Conservation Trust supports innovative solutions to issues of global concern and encourages model projects that engage and inform their areas’ local populations. Howard Buffett is president of the Howard G. Buffett Foundation, which focuses on humanitarian and conservation issues. An agriculturalist, businessman and widely published photographer, Buffett is also a member of the Commission on Presidential Debates, serves as a United Nations Ambassador Against Hunger for the United Nations World Food Program and is a member of the National Geographic Society’s Council of Advisors.