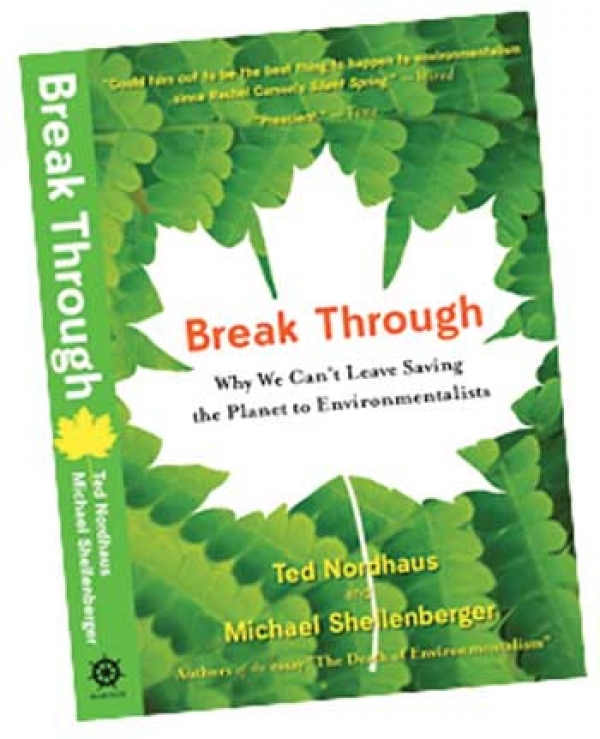 Why we can’t leave saving the planet to environmentalists.

In the fall of 2004, two young environmentalists, Michael Shellenberger and Ted Nordhaus, triggered a firestorm of controversy with their essay, ‘The Death of Environmentalism.â€ In it they argued that the politics that dealt with acid rain and smog can’t deal with global warming. Society has changed, and our politics have not kept up. Environmentalism must die, they concluded, so that something new can be born.

Three years later, Break Through delivered on the authors’ promise to articulate a new politics for a new century, one focused on aspirations, not complaints, human possibility, not limits. If environmentalists and progressives are to seize the moment offered by the collapse of the Bush presidency, they must break from ‘the politics of limits,â€ and grapple with some inconvenient truths of their own. The old pollution and conservation paradigms have failed. The nations that ratified the Kyoto protocol have seen their greenhouse gas emissions go up, not down. And tropical rain forest deforestation has accelerated.

What the new ecological crises demand is not that we constrain human power but unleash it. Overcoming global warming demand not pollution control but rather a new kind of economic development. We cannot tear down the old energy economy before building the new one. The invention of the Internet and microchips, the creation of the space program, the birth of the European Union – those breakthroughs were only made possible by big and bold investments in the future. The era of small thinking is over, the authors claim. We must go beyond small-bore environmentalism and interest-group liberalism to create a politics focused as much on uncommon greatness as the common good.

Break Through offers more than policy prescriptions and demands more than casual consideration. With its challenge to conventional environmentalist, conservative, and progressive thought, and its proposal for a politics of possibility, Break Through will influence the political debate for years to come.