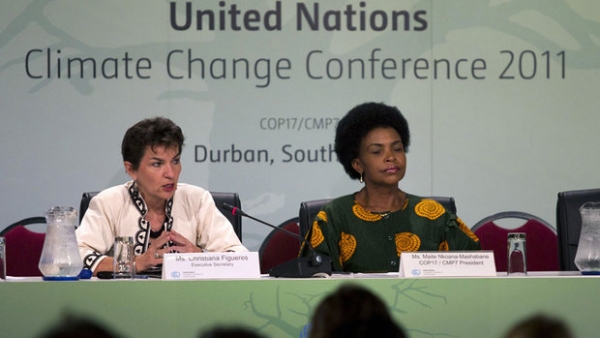 Ministers and high-level officials from 32 countries that met informally in Bonn on 4-5 May have expressed determination to build on the strong momentum of the UN Climate Change Conference in Durban to curb greenhouse gas emissions and adapt to the inevitable impacts of climate change.

One of the central outcomes of the meeting in South Africa, at the end of last year, was to pave the way for a legal agreement under the UN Climate Convention applicable to all Parties, to be completed by 2015 and to come into effect from 2020.

The two-day informal ministerial meeting in Bonn focused on what needs to be done in the near future and over the next four years to ensure that this and other key decisions that emerged from the Durban conference are effectively implemented, in order to bridge the gap between what governments have committed to up to now, and what action is required to make the world climate-resilient.

Participants heard a presentation on how to bridge this gap by the UN Environment Programme’s chief scientist, Professor Joseph Alcamo, which pointed to the dire risks resulting from staying on a business as usual emissions pathway, as well as the fact that staving off the worst impacts of climate change is both technically and economically achievable.

“The Durban conference resulted in one of the most encompassing and furthest reaching outcomes in the history of the climate change negotiations. It is essential that the momentum is maintained, and I see a strong willingness amongst governments to provide the necessary strong, high-level political leadership,” said Maite Nkoana-Mashabane, South African Minister of International Relations and Cooperation and President of the Durban UN Climate Change Conference (COP17/ CMP7).

“At the same time, all governments share the sense that equity needs to be a central component of the future climate change regime,” she added.

Speaking to the participants, the COP President said: “Let me also remind you that as we build towards the future, we must remain seized with implementing the agreements that have been made on the Green Climate Fund, Finance, Adaptation, Technology and Capacity Building. The key focus area must still remain: implementation, implementation and implementation now.”

Political guidance is needed in five areas to make progress this year.

“Fortunately, this is economically feasible and technically attainable. But it clearly depends on ambitious reduction efforts in industrialized countries, and on a sufficient level of ambition to support action by developing countries. So we also need to see the speedy operationalization of the Green Climate Fund and the Technology Mechanism,” she said.

At COP17 in Durban last year, governments noted with “grave concern” the significant gap between countries’ current pledges to curb emissions and what is required to limit the increase of global average temperatures to at the most 2 degrees Celsius. Because of this, they agreed to undertake a work plan to close the gap between what has already been pledged and what is required to meet this goal.

The launch of the new negotiation to shape the new global climate change agreement, and first discussions on how to raise ambition, will take place at the Bonn Climate Change Conference, which is designed to prepare decisions for adoption at the Doha Climate Gateway.