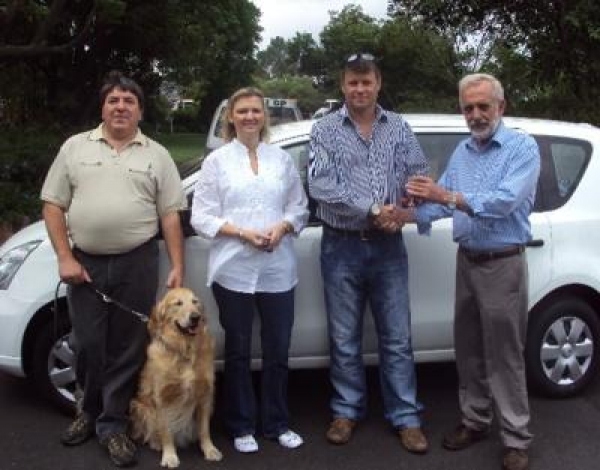 Pieter VanNniekerk and O’Reilly (SAGA), Elanor and Stephen Pienaar and Malcolm Driver (SAGA). The Pienaars flew up from up Durban and were thrilled to receive their Nissan Lavina. What a nice couple and SAGA wishes them many happy kilometres in their brand new car!

Wow – that was a serious fund-raising job, my hand has almost recovered from writing out all those ticket stubs over the last few months. Shyann and I have spent almost every sunny day since early July sitting at our local restaurant filling out your tickets, with a little help from some of the locals.

My original dream was to raise R10,000 for S.A. Guide Dogs in order to cover the cost of them bringing Shyann into my life. Because of your help I had to raise the bar, at first just a little, and then considerably higher, and in the end raised a little over R53,000. YES! Amazingly – that’s how much we raised. I think it was possibly a bit more than that as quite a few of you paid directly to S.A. Guide Dogs.

A huge round of applause is due to us all, yes you included! Thank you all so much. Without you we would never have managed it. I remember when I got my first 3 books of tickets and I wondered how on earth I was going to sell them, then when those were sold I asked for another 3 books and they accidentally sent me one lot of 3 books and another lot with 4 books. Now I had another 7 books to sell. An impossible task! That’s when I wrote the email that apparently touched you all and evoked such an overwhelming response. Well your response touched my heart in return. I humbly thank you all.

And what about the car?

The Car Competition draw took place on the 24th November at the South African Guide-Dogs Association for the blind (SAGA) in Johannesburg. Ronnie Bouwer from Nedbank did the draw and ten finalists tickets were drawn.

Mr Stephen Pienaar from Scotsville – KZN recieved the lucky call informing him that the had just won a Nissan Livina 1.6! He was thrilled and is collecting his brand new car on the 1st of December. SAGA will be placing and advert in the Sunday Times shortly confirming this and would like to thank each an every entrant who particpated and supported this project!