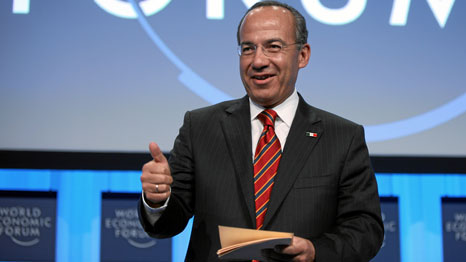 Calderon was Mexico’s president for six years, during which he oversaw UN climate talks in Cancun (Source: World Economic Forum)

Calderon was Mexico’s president for six years, during which he oversaw UN climate talks in Cancun.

The choice between tackling climate change and growing the economy is a “false dilemma”, according to Felipe Calderon, former president of Mexico.

Some actions may be profitable

Many of the actions needed to tackle climate change can be done at no cost, and may even be profitable in some cases, said Calderon, who is leading a report into the economics of climate change due out in September.

His view contrasts with critics of climate action, who say that the measures needed to tackle climate change, such as renewable energy, carbon capture technology and a carbon pricing mechanism, will place undue pressure on the economy.

At least half the effort possible without economic cost

“We need to produce a report in which we demonstrate that it is a false dilemma. Therefore, there is a way we can get economic growth, poverty alleviation and responsible behaviour towards the environment,” said Calderon, speaking yesterday at a conference on Latin America and climate change at Brown University.

He particularly touted the benefits of energy efficiency, while predicting that there would be a point when wind and solar power are cheaper than coal.

“We need to go first for the low hanging fruits. The key issue is at least half the effort we need to make, it is possible to do without any economic cost.”

Despite numerous academic and scientific voices supporting quick action as the most cost-effective way to tackle climate change, subsidies for fossil fuels continue to outpace renewables, according to the International Energy Agency.

In 2012, the cost of fossil fuel subsidies grew to US$ 544billion, despite efforts to reform the system, while renewable sources of energy received $101bn in financial support.

“It’s stupid,” said Calderon, who said that a formal commitment to eliminate fossil fuel subsidies would be one measure of success at the UN’s climate conference in Paris 2015, where they will seek to sign off a treaty that will limit climate change to no more than 2C.

He also highlighted other measures that could be taken to ease the journey towards a low carbon future, including finding a way to make forests profitable so that they are conserved, and building better cities to house an exploding population.

He added that he “can’t imagine” the transition to a low carbon economy taking place without the deployment of carbon capture and storage – an expensive technology still in its infancy that collects the carbon dioxide released by power plants.

The UN’s Intergovernmental Panel on Climate Change reinforced the point that tackling climate change remains financially within reach last week. Its report said that the actions required would only shave off 0.06% a year of overall economic growth, which is projected to increase between 1.6 and 3% annually.

Calls for divestment as a means of applying financial pressure to fossil fuel companies have grown louder over the past couple of weeks, with Harvard agreeing to take a more ethical stance towards its investments, and Desmond Tutu coming out in favour of the movement.

Speaking alongside Calderon at the conference at Brown, UN climate chief Christiana Figueres said that academic institutions should take steps to move their endowments away from coal.

“The thought that removing investment from coal on the part of one small institution is inconsequential and therefore not to be pursued, is analogous to the dangerous sentiment that in the context of a democratic system one vote is irrelevant because it does not constitute the majority,” she said.

Brown itself numbers among those who have refused to divest.

Thank you for story from Responding to Climate Change (RTGG)