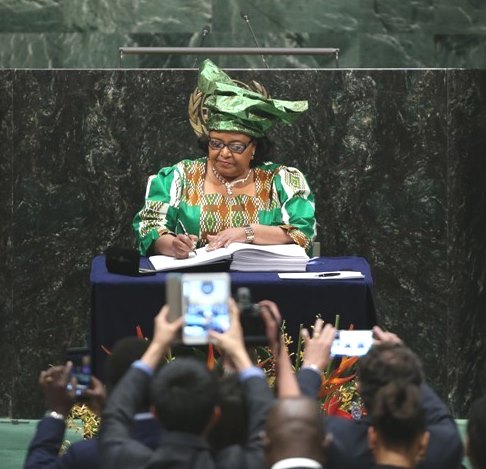 Minister of Environmental Affairs Edna Molewa signing the Paris Agreement on climate change at the United Nations in New York earlier this year.

A range of civil society organisations are taking their call for urgent clarification of greenhouse gas emissions objectives to the Public Protector. The complaint regards failure to implement provisions on mitigation in the National Climate Change Response White Paper, adopted by Cabinet in October 2011; most particularly the setting of “desired emission reduction outcomes” (DEROs) for 2030 and 2050, which was supposed to be completed within two years.

The complaint of maladministration is laid against the Inter-Ministerial Committee on Climate Change that is charged with ensuring implementation and the necessary inter-departmental coordination, chaired by Minister Molewa. It follows the disclosure that consideration of the emissions reductions required beyond 2020 is being held hostage to the finalisation of an Integrated Resource Plan (IRP) for electricity supply, which has been subject to serial delays by the Department of Energy and is not anticipated this year.

“South Africa should already have clear targets for greenhouse gas emissions than can guide development planning and public investment strategy for the medium and long term. It is utterly irresponsible for government to proceed with energy development plans that are six years old and not compatible with our international commitment to keeping global goal warming well below two degrees,” explains [Brian Ashe, director] of AIDC, the NGO leading submission of the complaint.

“We have had no response to an open letter to the Inter-Ministerial Committee appealing for resuming stakeholder deliberation of this issue, published and sent to Minister Molewa four months ago. The most recent development, prompting recourse to the Public Protector, is a policy document that shows government is not even trying to set out an appropriate national emissions pathway to enable what the policy refers to as ‘climate change resilient development’.”

The ‘DEROs Explanatory note 4’, dated March 2016 and made available to stakeholders on 4 August, is the first indication of work on DEROs since a draft methodology paper that was shared with stakeholders at the beginning 2015 and shortly thereafter abandoned. The new paper deals almost exclusively with the voluntary commitments or ‘carbon budgets’ to 2020, currently being negotiated with major emitting companies, and abandons the White Paper provision that: “The DEROs will consist of three successively nested frameworks for the long-, medium- and short-term (by 2050, by 2030, and from 2016 to 2020 respectively),” referring instead to a five-year budgeting cycle.

“What good is signing an international agreement if at home we are not even looking at what is required for success?” asks Richard Worthington, researcher for AIDC. “There is much talk of the need for trade-offs and balancing objectives, but how do we achieve meaningful balance if we have not weighed up what is possible and desirable for effective climate change response?”

Fossil fuels a source of ill-health, poverty and inequality

“Burning fossil fuels has powered an economy that has enriched a few and impoverished many. It is a source of ill-health, poverty and inequality, not the solution. A hotter harsher climate makes people’s lives even harder,” says Bobby Peek of Groundwork. “We need urgent action to reduce greenhouse gas emissions and we urgently need joined-up government that puts the lives of people before corporate profits.”

“The longer we avoid facing up to what is required, the weaker our prospects become for a just transition to sustainable energy. The task of reducing our emissions will only become harder and more costly the more we delay, which makes this avoidance at a national level quite unacceptable,” says Richard Halsey of Project 90 by 2030.

Please find the full text of the complaint to the Public Protector (detailed in section 16) here.

The following organisations have joined the Alternative Information and Development Centre (AIDC) in lodging this complaint: