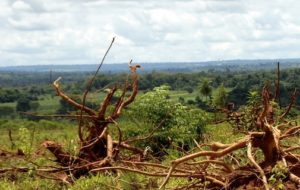 In previous years, the Diocese of Vasteras, the Lutheran Swedish Church and the Norwegian Lutheran Church Endowment, have been investing heavily in the expansion of pine and eucalyptus tree monocultures in central and northern Mozambique through the companies Chikweti Forests de Niassa, TectonaForests of Zambezia, Ntacua Florestas de Zambezia and Florestas de Messangulo.

To finance these large-scale projects, these churches and church institutions mentioned above founded the Global Solidarity Forest Fund (GSFF). It is a Sweden-based private equity, supposedly ethical investment fund focused on the establishment of industrial timber plantations in southern Africa. The Dutch Pension Fund ABP and other institutions have also invested in this Fund.

Contrary to official statements of the GSFF, many of the tree monocultures concerned are planted on fertile farmland in rural areas, land primarily used by local communities with customary land rights, for small-scale and self-sufficient farming and, therefore, vital to the food security of these people.

Further, natural indigenous forests are chopped down at an alarming rate to give space to the monoculture tree plantations, which seriously impact on both the food security and biodiversity in those areas.

In addition, following the establishment of the Ntacua Forests eucalyptus plantations in 2008, due to the extremely high water consumption of the alien plants – each eucalyptus tree uses at least 50 liters of water a day – , the availability of water, which, in most rural areas of Mozambique where only 42% of the total population have access to improved drinking water sources, is a scarce and valuable resource, is worsening as reported by several members of an affected community in Zambezia Province.

The plantations of Ntacua Florestas de Zambezia, contrary to the promises of the company, do not increase the job security in affected areas, since subsequent to the clearing of the land and the planting of the trees, there is no need for workers in the plantations anymore; except for a few security guards.

The few people who are working in the plantations as is the case in Zambezia and Niassa suffer from bad working conditions, such as the payment of inhumane wages which sometimes are under the legal minimum wage in Mozambique and lack of adequate transport. Once employed, they have no time to grow food for their families which affects food security. It is extremely irresponsible for a church institution that should place special emphasis on social factors in all its operations to exploit impoverished communities for profit.

Destroying the possibility of farming

By establishing these large-scale monocultures, the churches destroy the possibility of small-scale farming in these areas, which is due to a massive degradation of the soil and the destruction of areas reserved for agricultural fields (‘machambas’). This is devastating for affected communities, especially since 80% of the economically active population are working in agriculture and living in rural areas and depends directly on self-sufficient farming to feed themselves and their families. The lack of solution for these problems have lead to extreme situations such as the very grave conflicts that have happened in Niassa province where angry and despaired farmres have destroyed tree plantations.

The establishment of plantations in those areas will have dire long-term consequences for the local population as has been reported in other places in the global South where these plantations have been established as is the case of near-by South Africa; degradation of fertile soil, drying up of water sources, invasion of fields by Eucalyptus and Pine trees and the loss of complete livelihoods. Also, the large-scale destruction of indigenous vegetation already has and will have a huge impact on vital biodiversity, the integrated ecosystem and the natural services provided by real forests.

For those reasons the stated targets of the organizations, which include reforestation, restoration and responsible management, are not reached at all. Instead, people are deprived of their land and are promised secure job creation and poverty alleviation which has not become true. Instead, frustration, anger and despair have increased in communities that already have suffered a lot over the past decades.