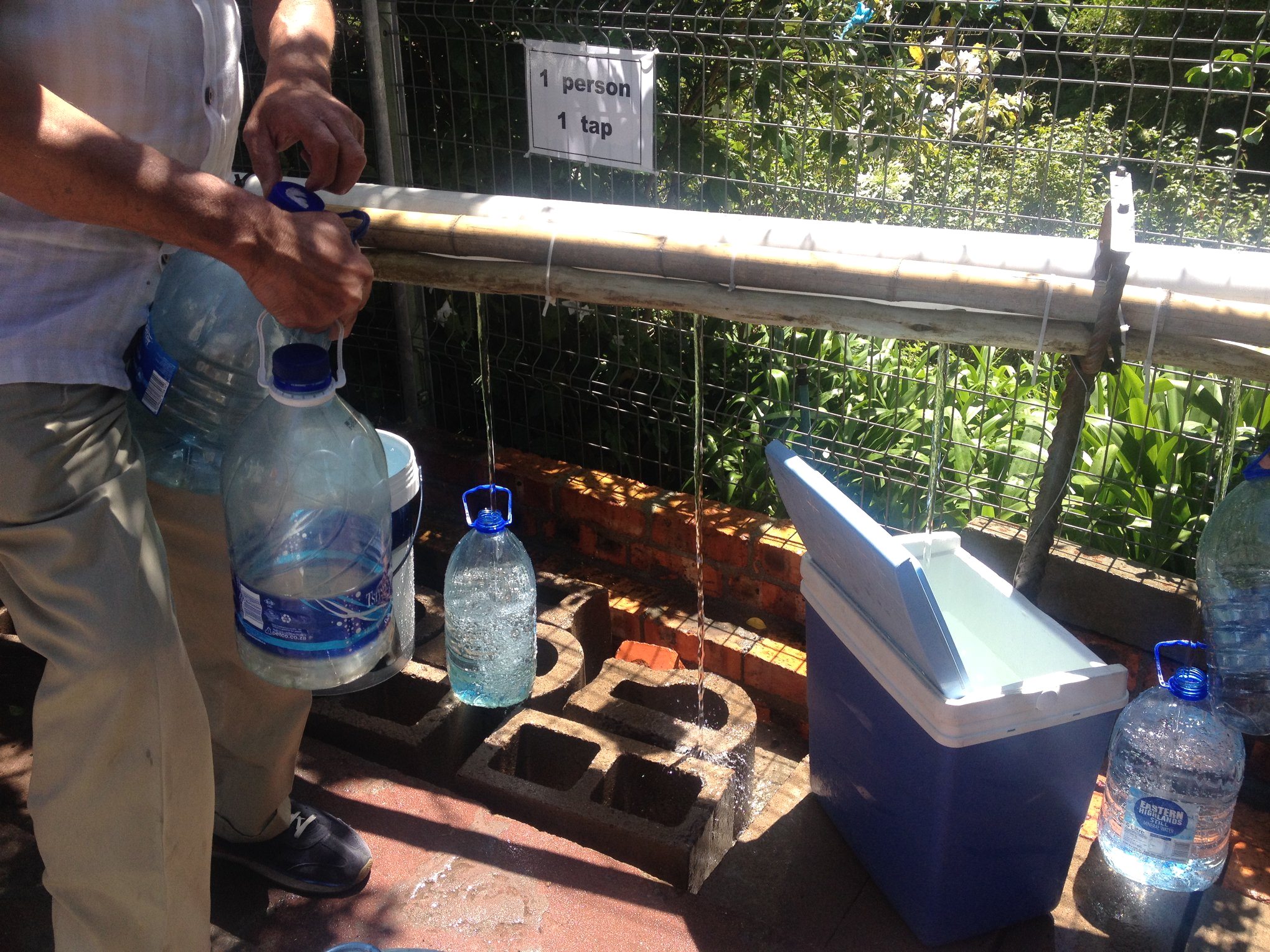 Kildare Spring, which is part of the Newlands system (and Newlands Aquifer), is situated in the Cul de Sac, Spring Way – off Kildare Road in Newlands Village.

For years people have collected Water here, with only one outlet. It took one Water activist with foresight and initiative, to set up the pipes, so that multiple people could collect at any one time. Active citizenry and community resilience are vital in this time of #WaterCrisis.

In the document “SPRINGS UNDER CITY COUNCIL’S CONTROL, by Cecilia Visagie, 28 August 1995 – Waterworks Branch, the following information regarding Kildare Spring is provided, under 2.17 on page 15:

“The water from this spring used to be pumped to Wynberg, but the spring was sealed off at some time. There are a lot of roots in the underground chamber and it isn’t clear if any pipes exist. It wasn’t possible to measure the flow. According to a water analysis the water is characterised by a low pH and alkalinity. Before being used for drinking purposes, the water will have to be chlorinated.

The water analysis can be found in Annexure E.

Photograph no. 20 in Annexure D shows the source of the spring with the Kildare pump station in the background. Photograph no. 21 is a close up of the underground chamber.”

In September 2017, the CoCT’s Mayoral Committee indicated that they had changed their minds regarding the #KildareSpring, and would not re-route the Water at the spring in Spring Way, Newlands to the municipal Water supply or close it off to the public”.

This was in thanks to #ActiveCitizenry whereby residents made their opinions known with more than 500 signories to a petition to keep the free Water source from drying up. However, “the City has confirmed that their plans for the spring were misunderstood and the closure of the free water supply to the public had never been considered as an option.” 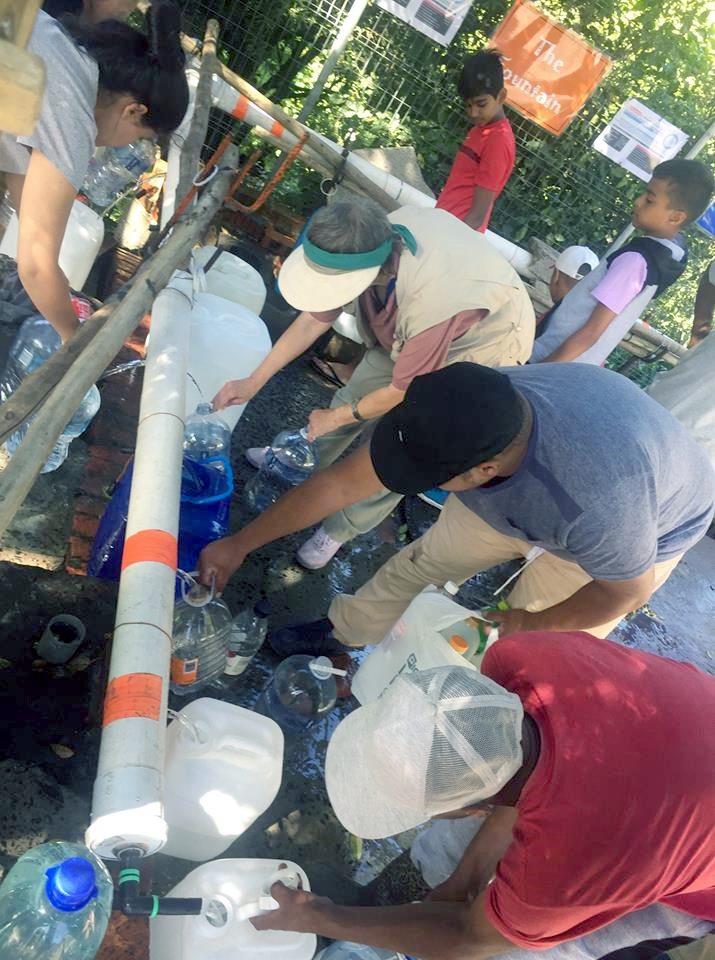 However, the CoCT is currently engaging with the Department of Water and Sanitation and “other stakeholders” and is preparing a licence application for use of the spring.

South Africa has one of the most progressive Water regulatory regimes in the world – the constitutional ‘right of access’; and is one of twenty signatories to a declaration, recognising Water as a human right. In our Constitution’s Bill of Rights, Section 271b, it states that everyone has the right to have access to sufficient food and Water, and that Water is a common that should be shared in an equitable manner.

Reclaim Camissa are calling on our government, as the custodians of this Water, to – 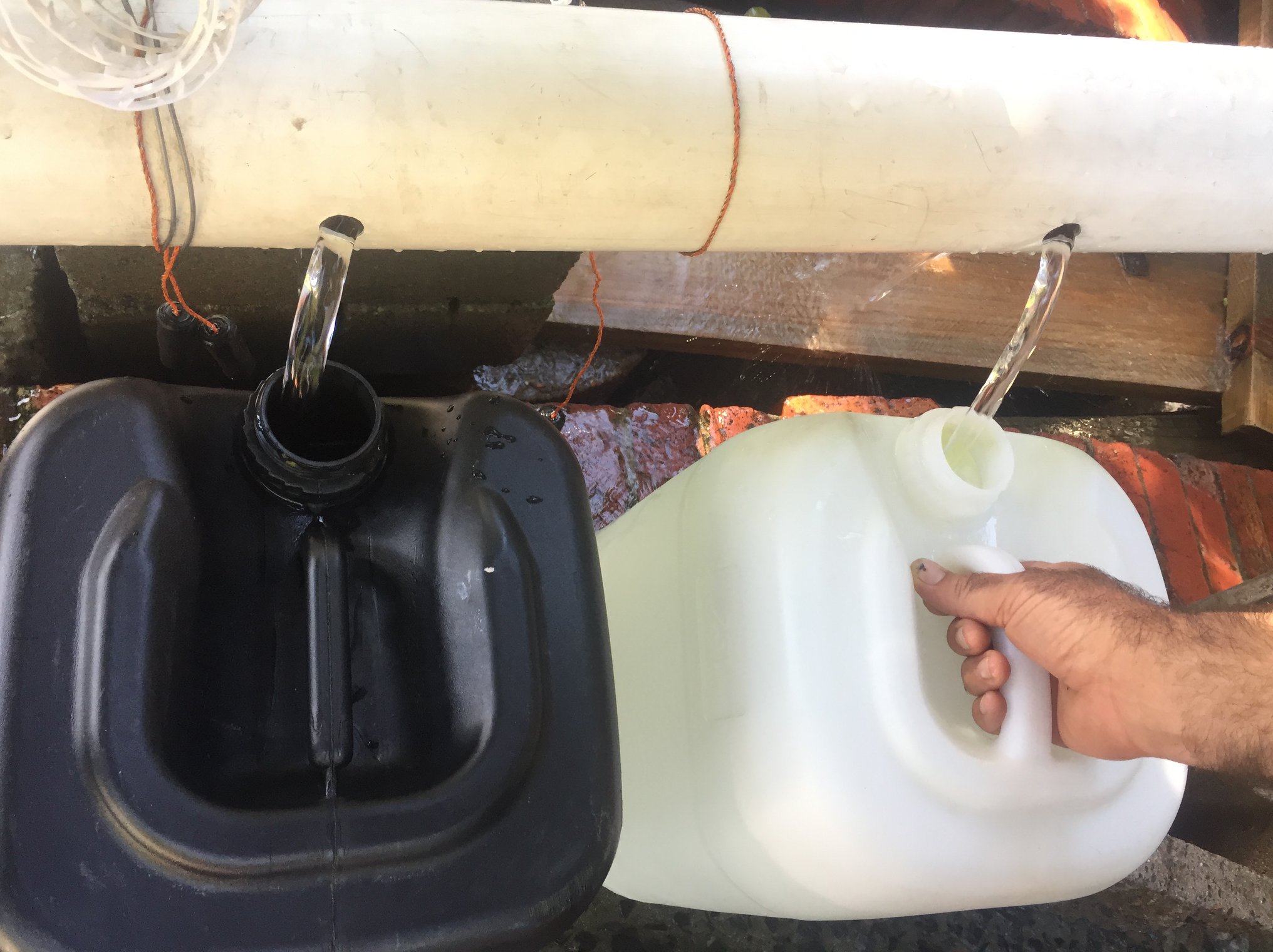 In the most recent, “HYDROGEOLOGICAL INVESTIGATION OF EXISTING WATER SPRINGS IN THE CITY OF CAPE TOWN AND ENVIRONS: Strategy Document – WATER & SANITATION WATER DEMAND MANAGEMENT & STRATEGY, 24 June 2015” the Newlands Aquifer is omitted.

Furthermore, it states “the following legal frameworks will need to be considered, before finalising implementation of the spring use strategy:

Department of Water and Sanitation (DWS):

Regarding the proposed spring use in the Newlands area, it states:

“The information for the Newlands area is not as comprehensive as that for the CBD. The strategy will be refined as more information, especially around flow, is gathered. There is significant excess flow from the Newlands and Palmboom Springs in the Newlands area. However, this water also discharges into the Liesbeek River and is thus vital for ecological use. The component that will be allocated for ecological use will be determined by DWS during the water use license application (WULA) process.

The existing infrastructure is also not as readily accessible as that of the CBD. The spring itself is on SABMiller property, and the existing pipelines all belong to SABMiller. It is proposed that a CCT pipeline be installed from the spring source into Springs Way, and that distribution is done via pipeline from this point. The pipeline installation needs to be a collaborative effort between CCT, DWS and SABMiller.

Existing spring use has been allocated as available, but this will also need to be refined during the WULA process. 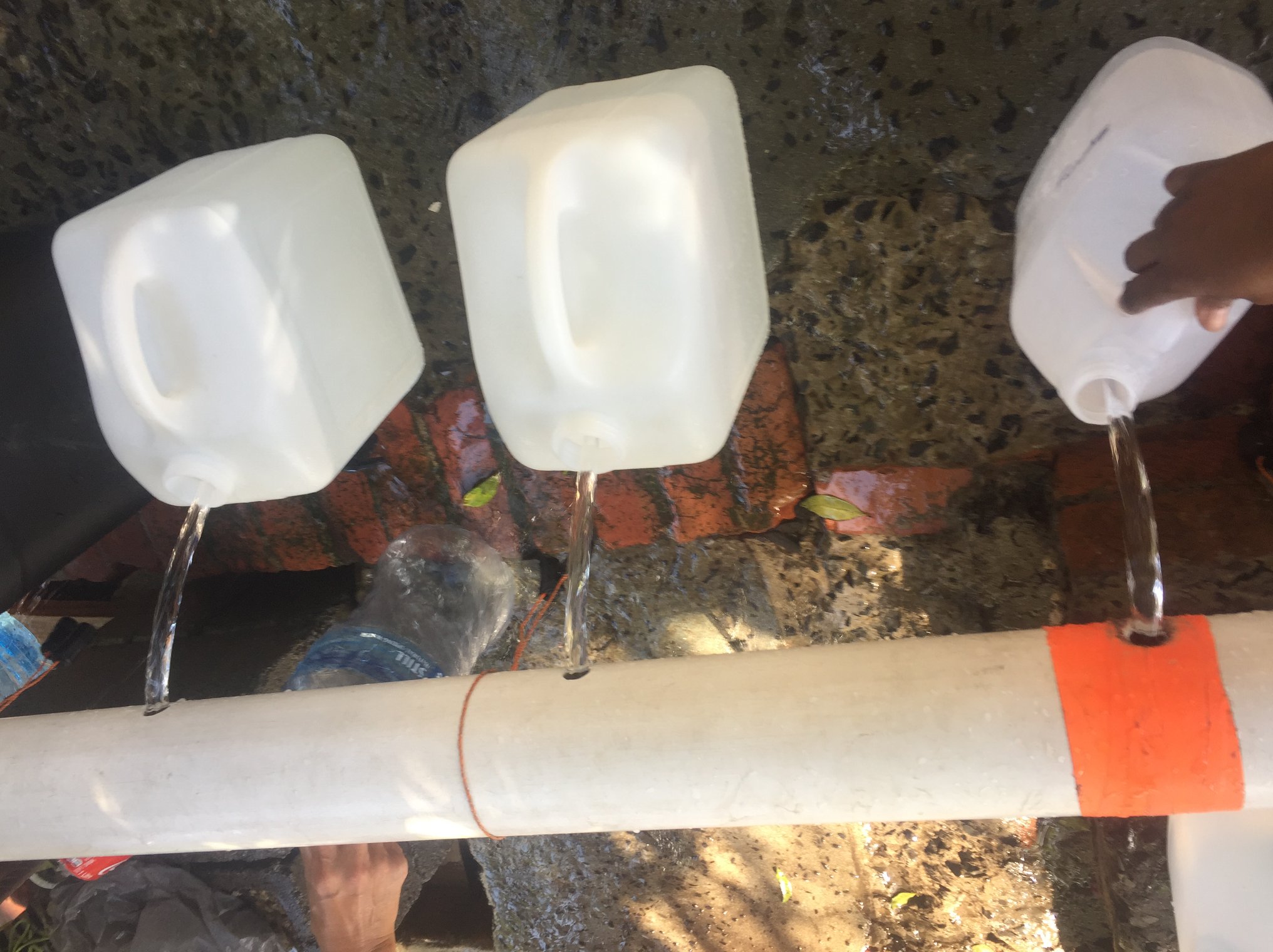 The total excess flow for the Newlands area is thus as follows:

Groundwater is used extensively in the Newlands area. Other areas have not been verified and will only be verified to a certain extent when a better understanding of the water availability is reached. The calculated potential demand for these areas is summarised in the table below. Only excess flow will be utilised. 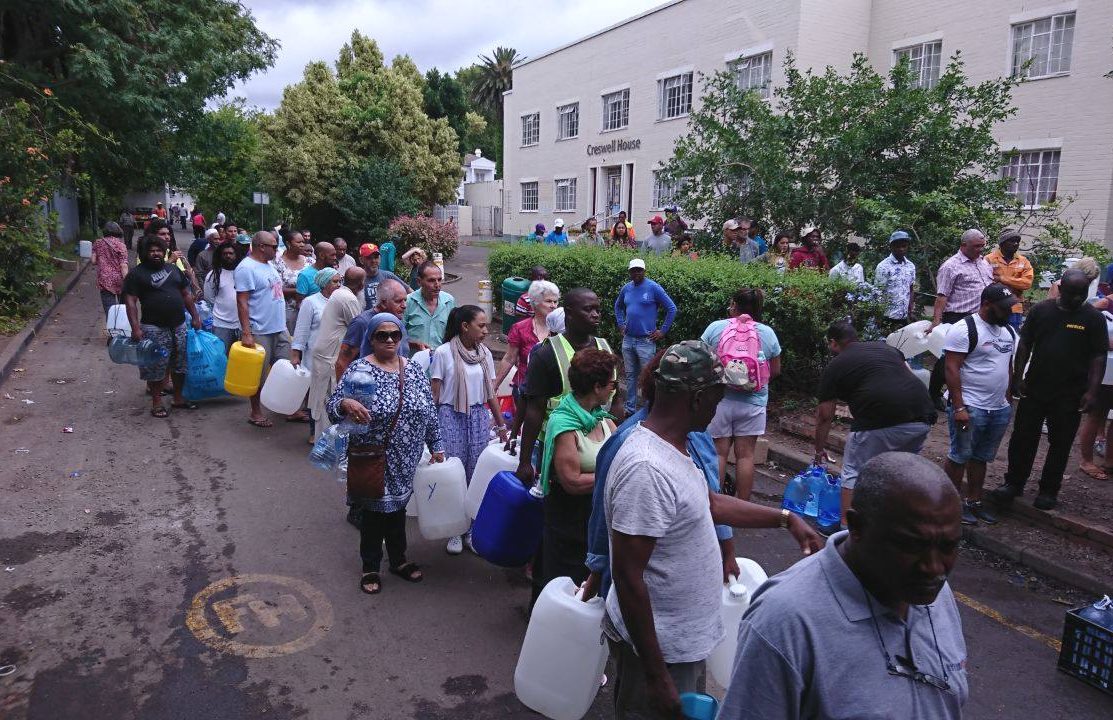 The implementation framework will be a step- by-step process and includes:

The implementation of the proposed policy should be guided by the following: 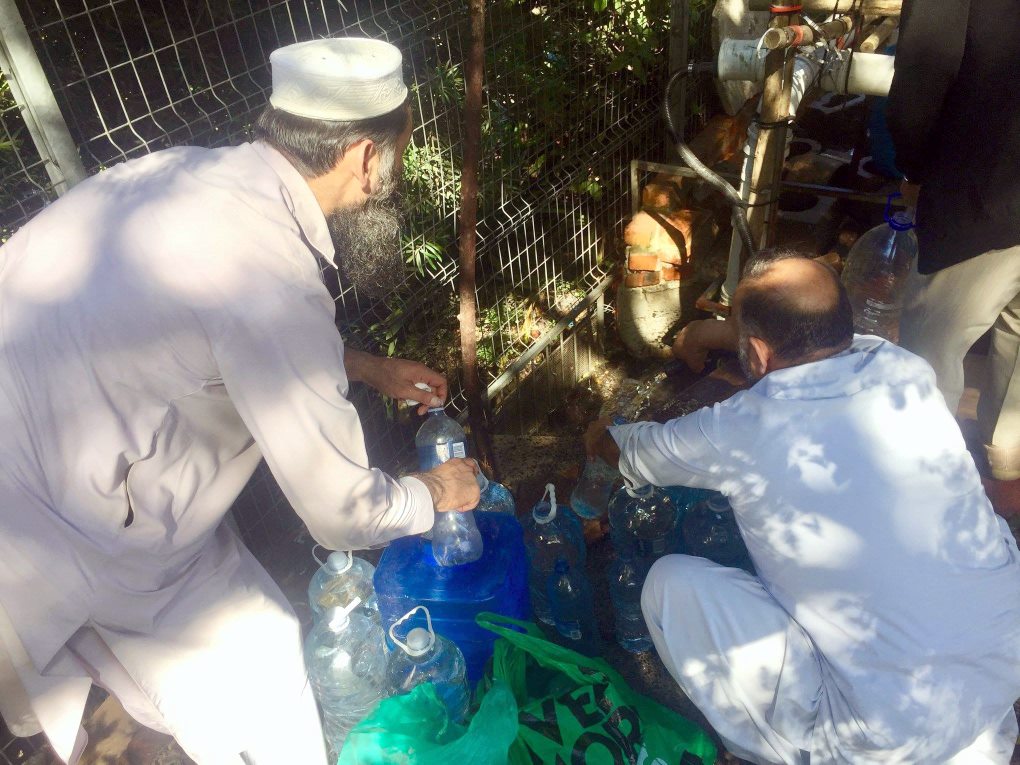 The following are some of the success stories related to the springs study:

Springs in the Newlands area:

In 1657, Van Riebeeck granted land rights along the Liesbeek River, to nine “free burghers” tasked to help produce food for the ships and settlement. The settlers were dependant on streams and spring water. One of these nine properties was Papenboom, the property adjacent to the Newlands Spring (renamed from Papenboom Spring Willem Adriaan van der Stel after he established De Nieuwe Land Estate in 1700). In 1694 the first beer brewing licence was granted to Rutgert Mensing, who used the water from this spring to brew his beer (Law, 2007). Water from the Newlands Spring is still used for brewing beer today. In 1857, there was talk of using the Newlands Spring to increase water supply to Cape Town, but it was decided that the spring water from Van Breda’s estate with its existing reservoir storage above town, was far more feasible (Murray, 2008).

The Albion Spring is on Rouwkoop, one of the Cape’s original farms in the Newlands area, granted to a Harman Remanjenne, in 1660. The spring’s water was most likely used for growing wheat and possibly vines. The Rouwkoop Estate was subdivided in 1816, but water rights of 100 000 gallons per day from the Albion Spring were guaranteed for both properties.

In 1835 the water authorities investigated the possible use of either the Newlands or Albion Spring for the town’s supply of water. The Newlands Spring servitudes were complex; whereas the Albion Spring supplied Mr Hawkins with drinking water of “4 buckets per diem” (Archaeology Contracts Office, 1992). Nothing happened until 1889, when water supply to the smaller municipalities (Rondebosch, Mowbray, Claremont, Wynberg, Newlands and Woodstock) became dire. 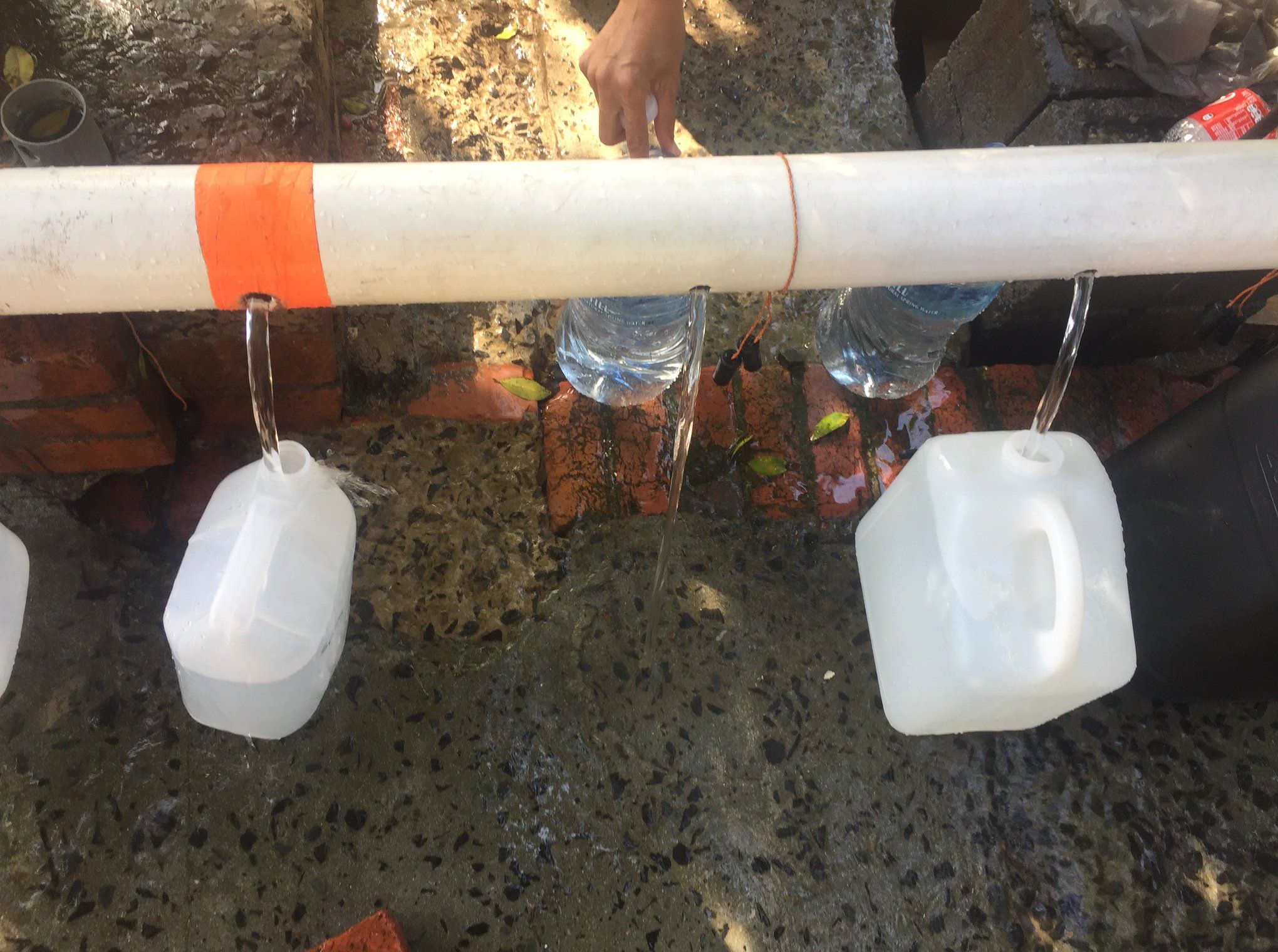 These municipalities mostly derived water from the Liesbeek River, which was at that stage polluted by industry, ncluding the brewery. The De Hoop property was bought in 1889 by the Cape Town District Waterworks. This purchase also included water rights to the Albion and Kommetjie Springs that were then used for water supply (Mäki, 2008). The first environmental ruling concerning the Liesbeek River was also made during this time: The Cape Town District Waterworks were ordered to allow ~2 273 m3 (500 000 gallons) of water to flow into the Liesbeek River daily (Archaeology Contracts Office, 1992).

The water from Albion Spring is currently still used on an ad hoc basis by the CCT, and it is planned for use during the day when the demand for water is at its highest.

The Kommetjie Spring is used by the brewery for cleaning and by SACS (South African College Schools) for irrigation purposes.

The Palmboom Spring was also used for domestic water supply by the City for some years. There is limited historical information on this spring, but it is likely that it was found during a water borehole drilling programme in 1918 (Mäki, 2008). It was used by the CCT from 1954 to 1973. The flow measured in 1981 was 950 m3/day (11 l/s). The water was also noted as extremely aggressive (low pH and low alkalinity) (Visagie 1995). This water currently runs into the storm water system.”
— HYDROGEOLOGICAL INVESTIGATION OF EXISTING WATER SPRINGS IN THE CITY OF CAPE TOWN AND ENVIRONS: Strategy Document – WATER & SANITATION WATER DEMAND MANAGEMENT & STRATEGY, 24 June 2015.