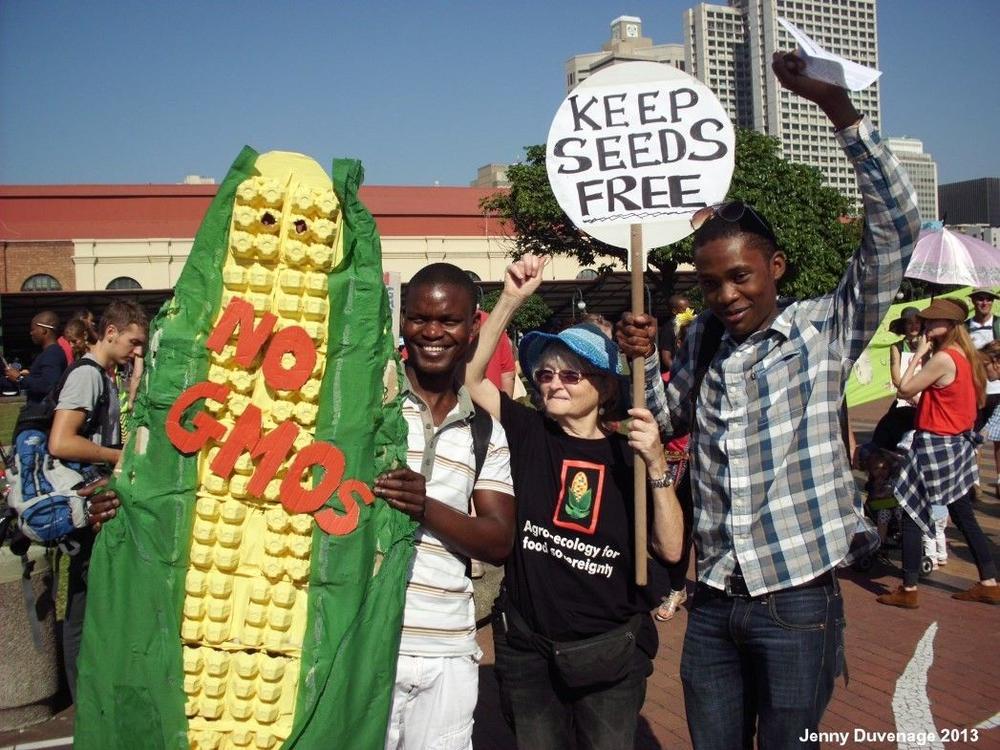 Ordinarily GMO stands for Genetically Modified Organisms, but on Saturday 25 March 2013, it stood for Get Monsanto Out!

The excitement started early on Saturday morning, with Australia getting the international ball rolling with the first protests, followed soon after by South Africa. As the day progressed, country after country submitted their pictures and updates on the Facebook page, spurred on by those whose protests had already concluded, and those which had not yet begun.

The worldwide protest against the U.S. based multinational agricultural biotechnology company, is estimated to have included upwards from 2 million people across 52 countries in 436 cities, according to RT.com and the Huffington Post.

Quoting founder and organiser Tami Canal, “If I had gotten 3,000 people to join me, I would have considered that a success.”

Instead, she said two million responded to her message. Marches took place across the globe: every state in the US, South Korea, France, Amsterdam and the list continues.

Marches also took place in Plettenberg Bay, Johannesburg and Durban. There were approximately 600 participants in the Cape Town protest, which met at Keizersgracht at around 10am with a planned 11am start time. After a slight delay, marchers were informed that permission had been granted to walk to the Grand Parade as of 12:30pm. Marchers remained at Keizersgracht until then, with the energy being kept up by the organisers and a group of local Hari Krishna musicians.

With a minimal police presence, the march then proceeded down to the Grand Parade where everyone gathered to voice their thoughts, opinions and ideas. A loud hailer was freely passed around to everyone who wanted to contribute, from the organisers to local farm workers, concerned parents and interested teenagers. Farm workers were angry that “…we are losing control of our seeds,” but were encouraged by the good mix of people that had come from different areas to make a statement: that “Monsanto must go out of, not only Cape Town and South Africa, but out of Africa.”

Others expressed concerns that “…when we eat food with changed DNA, it changes our DNA” and that “we want to be given the choice” (of whether to consume GMO’s or not). In a generation clouded by a reputation of ‘disinterest’, the amount of informed and passionate young people was a welcome sight. Among the many banners that were carried, a few had some radical, attention-grabbing slogans like ‘Burn GMO farms’ and ‘Seeds of Death, Burn the Crops’; however, leaders of the marches worldwide called for “peaceful action” and, for the most part, that is exactly what it was. 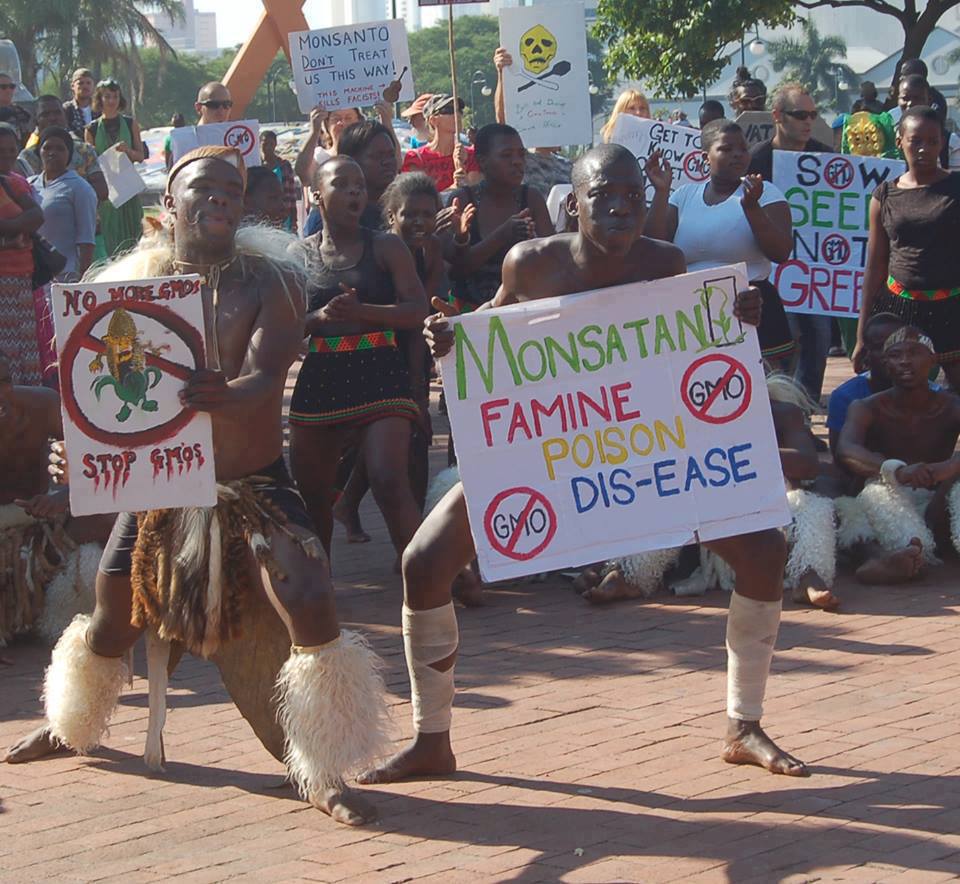 GMO’s can be defined as “a plant or animal that has been genetically altered by scientists to improve its ability to grow in non-native environments, resist pests, tolerate extreme weather conditions, produce more food (like milk in cows), or show other desired traits. In other words… a new version of a food plant or animal created by scientists through genetic engineering (GE) techniques. These techniques are used to insert genes into or delete genes out of plant or animal DNA. Scientists have used GE technology to create plants, animals, and bacteria with biological characteristics that would never occur in the natural world.” Read more at Durban Coop Market.

It is these genetic modifications that are leading to growing concerns for increased allergenicity in children. Another leading concern is that there are no definitive answers as to the safety of GMO’s for human consumption.

“In reality, FDA scientists had repeatedly warned that GM foods can create unpredictable, hard-to-detect side effects, including allergies, toxins, new diseases, and nutritional problems. They urged long-term safety studies, but were ignored.”

A question on many minds is “What foods, if any, should I avoid in South Africa?” On the local Facebook page, one of the organisers, Jeannie Ross, replied, “One of the main reasons we marched is to enforce mandatory labelling of GMO ingredients. Unfortunately, due to non-compliance of producers who are ignoring the CPA’s requirements to label GMO’s, we don’t have a list. However, you should avoid ALL maize, corn, soy, canola, cotton (cottonseed oil), gem squash, papaya, peas and sugarbeets. Basically that means you have to go organic. 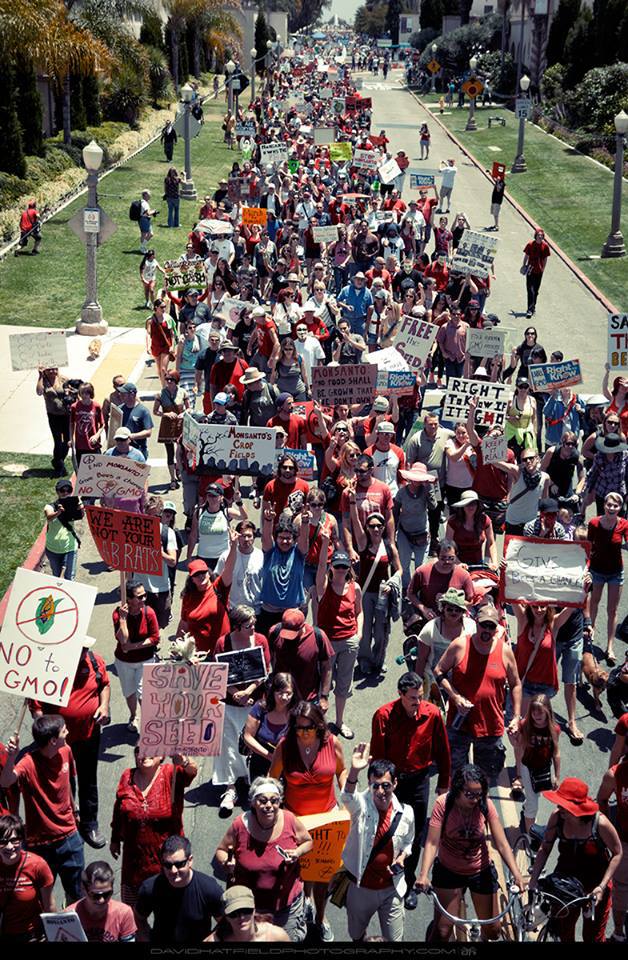 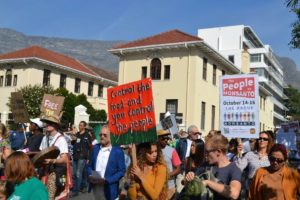 So why all the anger towards Monsanto in particular (there is even an ‘I hate Monsanto’ Facebook page)? The short answer is: they are the leading culprits of pushing genetically modified seeds into the market. There are also worldwide outcries against their business model and its effects on local farmers.

Join the ‘March Against Monsanto’ page on Facebook to be informed of future events planned for October 2013, to coincide with GMO Awareness Month and World Food Day on Wednesday, October 16. While this is not an issue that is expected to be resolved anytime soon, hopefully the fair percentage of informed citizens, young and old, that were present on Saturday is a sign that the fight for our food will continue, for as long as it takes.