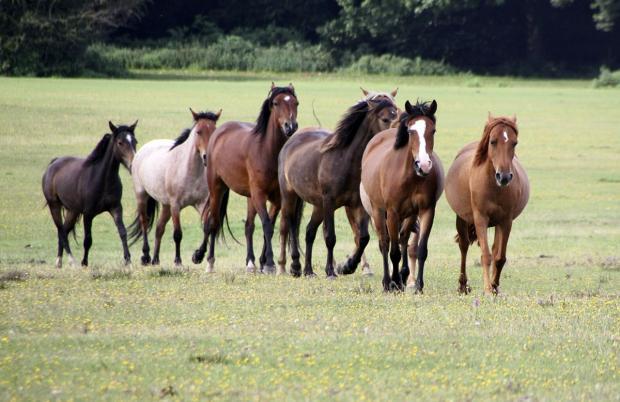 The New Forest, an area of southern England which includes one of the largest remaining tracts of unenclosed pasture land, heathland and forest in the heavily populated south east of England. Julian Lewis, Tory MP for New Forest East, said no fracking should take place in national parks until its impact on other parts of the countryside had been assessed.

Campaigners have attacked a UK government U-turn that could result in fracking being carried out beneath the New Forest and the South Downs National Park.

A cross-party committee of MPs will debate the potential impact of fracking and the level of protection given to special areas of the English countryside.

The government originally pledged that fracking would be banned in national parks. But new regulations say energy companies will be allowed to drill horizontally under protected zones as long as the wells are outside the boundaries.

Will national parks be ringed by shale gas operators?

Prime Minister David Cameron has said that shale gas exploration in the UK will create thousands of jobs and cut reliance on imports. But the government’s U-turn has sparked fears that national parks will be “ringed” by shale gas operators.

Daisy Sands, head of energy at Greenpeace, said the new rules were set to be rushed through without a debate in the Commons.

She added: “It is deeply disturbing that the government appears to be playing fast and loose with democracy.

“Not only are they breaking their promise that national parks would not be scarred by fracking, but they are trying to sneak these regulations through the back door of parliament without any proper scrutiny from MPs.

‘Riding roughshod over democracy’ for fracking

“The government is riding roughshod over democracy to industrialise our most beautiful landscapes.”

Julian Lewis, Tory MP for New Forest East, said no fracking should take place in national parks until its impact on other parts of the countryside had been assessed.

“We need to obtain a lot more evidence and experience before contemplating it in sensitive areas,” he said.

Fracking has been linked to earthquakes and other environmental problems.

As reported in the Chronicle, the move to allow it to take place under national parks was first proposed earlier this year.

The government said the legislation needed to be flexible to prevent the fracking industry being “unduly constrained”.

“Our understanding remains that the proposed relaxation of the planning regulations do not extend to surface fracking in the National Parks.”

If we’re going to play our part in tackling global climate change, we need to leave fossil fuels like shale gas and oil in the ground. And while we’re still campaigning for an all-out ban on fracking across the UK, we must act fast to protect these fragile areas. Our UK readers please email your MP – and let’s keep working together and pushing back against fracking at every opportunity we have.