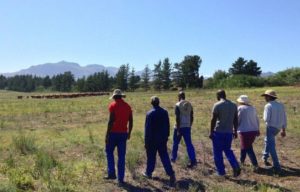 Whether someone wishes to eat meat or not is a very individual decision. Some people feel the need to eat meat regularly while others become ill if they so much as smell it. It can be for reasons of personal health and it can be a matter of principle. Either way being a vegetarian or a vegan is a very noble aspiration and one which need not conflict with biodynamic farming.

It is often said by committed vegans that keeping farm animals is an abuse of their nature. This is very understandable and certainly true when farm animals are kept under such inhumane conditions as those existing in modern intensive livestock units. In such a situation the animals are crowded together with barely room to move, pumped full of antibiotics to keep them alive and treated as production machines. Furthermore such abuse of the animal can hardly be expected to produce wholesome food. There is no place for such animal cruelty in an enlightened farming system. In older more traditional farming systems however, cows and sheep held a very different cultural position and were granted a great deal of respect.

Consider the close relationship of the traditional shepherd and his flock or that of the nomadic tribesman to his cattle. They live with and are totally in tune with one another. The same can be said of many farmers even today. The relationship between the farmer and his animals can be experienced as a true partnership from which both parties benefit – in return for the care given them, the animals provide milk, wool or eggs. Cows, sheep, horses, pigs etc. have been close to human beings for thousands of years and in this time have become very different to their wild relatives.

Lose the farmer, lose the countryside

Today we no longer live in a wild and untamed landscape. Every piece of our west European countryside and indeed most of the world has been changed through human activity. Nor can we imagine it otherwise. We are now responsible for the landscape and need to ensure it remains and becomes ever more productive, beautiful and sustainable for future generations. We can only do this by farming it. If we lose the farmer, we lose the countryside. On a biodynamic farm every effort is made to ensure that each animal can express its true nature as a domestic animal. This means being able to move freely, receive the farm’s own quality feed, be treated with care and respect and not be subjected to the stress of over-crowding and exploitation. 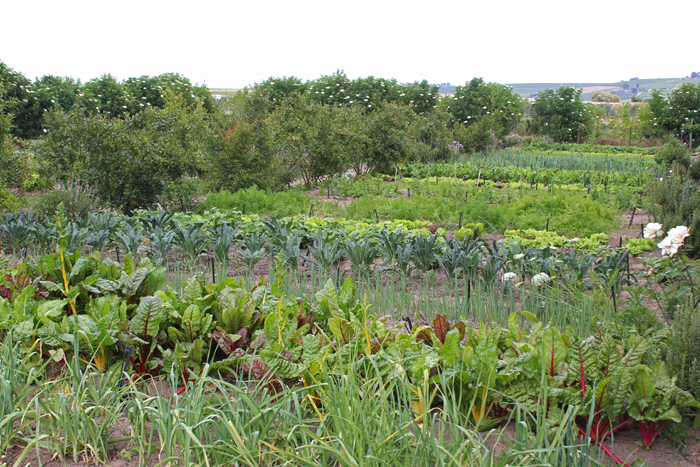 It should also be remembered that on a biodynamic farm only so many animals are kept as can be sustained by the farm’s own supply of fodder. This immediately sets a limit on numbers and prevents over crowding. With such a closed system all the elements – livestock, feed and soil – come into harmony with one another, stress is removed and the whole farm is permeated with health and vitality. One reason for keeping livestock is of course the product that each animal provides. A cow has been bred to produce more milk than her calf needs, the hen more eggs and the sheep to produce wool that can be shorn each year. But so long as the natural laws of the closed farm cycle and balanced breeding policies are pursued and the stock person cares for the animals with love and compassion, the animals will thrive and generally live contented lives.

Even more important to the farm however is the manure each animal produces and the quite specific contribution each species can make towards the healthy and balanced management of the farm’s ecosystem (grazing of grasslands etc.). While it is possible to envisage a stockless farm, the presence of grazing animals makes the work of the farmer considerably easier and more productive. They are the farmer’s true assistants. Without farm animals it would take a farmer far longer to build and retain soil fertility. 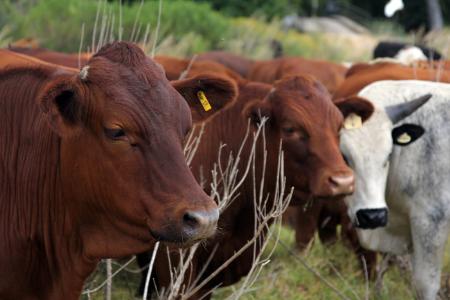 A living soil depends not only upon decaying plant material but also on countless micro-organisms and earthworms. Their activity is essential for the creation of rich and fertile soil and while it may be possible to grow crops without animal manure, an organic system is impossible without the teeming animal life in the soil. It has been calculated that for a farm to be healthy, the weight of animals in a fertile soil should equal or exceed the weight of grazing animals moving over its surface. It follows from this that the converse is also true and an adequate number animals grazing on its surface will stimulate the micro-life beneath. The activity of animals grazing and the manure they leave behind enhances life in the soil.

The question of whether it is right to terminate the life of an animal or not is something everyone needs to answer for themselves. When human beings were hunter gatherers some ate meat while others were vegetarians. In pristine nature flesh eating is as much a part of life as the grazing of herbage. What contravenes the laws of nature is the killing of animals for sport, out of hysteria (FMD fiasco) or purely for profit. The hawk which catches a song bird or the cat that plays with a mouse expresses its nature as much as the lamb at pasture or the worm in the compost heap. Killing by carnivores is a matter of necessity and of survival. To prevent a cat or a dog from eating meat would be as unjust as it would be to prevent a cow from eating grass. Unlike animals, human beings can choose what kind of food to eat and what to avoid. It is possible to eat meat and thrive. It is also possible to avoid all meat and even all animal products and yet still live a healthy life. It is part of human nature and our inborn right to choose the way we wish to feed ourselves.

In managing a farm and the livestock belonging to it, the farmer has to take the long view. It is not just about personal survival or providing for the coming year. It is about the growth and long term development of the farm, its soil, plants, animals and the biodiversity of the landscape. As farmers we take responsibility for the processes of nature and this in effect means trying to mimic them. In order to achieve the closed and self-sustaining farming system described above and to maintain but not exceed the number of cows, sheep or chickens the farm can support, the farmer will need to breed and select the animals being cared for. This involves a conscious engagement with what nature does continually by way of natural selection. It means choosing which animals to retain and which ones to remove in order to maintain and improve the herd or flock. Removal can mean selling stock to other farmers, it can also mean culling them for meat. The production of meat is then not a primary aim but a by-product of this process of selection – a process which is as necessary to the health of the farm organism as natural selection is in wild nature. 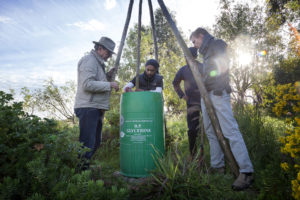 The farm as an organism within the greater organism of the earth involves all the kingdoms of nature. The soil is the result of the interaction between the plant, animal and mineral worlds. Every particle of soil for instance will at some stage have passed through the gut of an earthworm. It is also worth remembering that each animal form in the soil has a very specific task to perform and often a very limited life span in which to do it. As each creature fulfills its allotted task it dies and adds its own corpse to the soil. The soil is thus made up to a very large extent of the decomposing bodies of tiny animals. All our garden plants are growing in soil which is made up either of the composted remains of animals or of their intestinal products.

A number of unusual and mainly herb-based preparations are used in biodynamic agriculture. These are applied to soil, plants and compost in minute amounts and serve to regulate and stimulate the living processes of the farm. These are the so-called compost and spray preparations. The former are made from well known medicinal herbs (yarrow, chamomile, nettle, dandelion, oak bark and valerian) and have very specific functions within the decomposing and humus forming processes that occur within a compost heap and in the soil. Collectively they help to ensure that the compost provides the soil with the forces the plants growing in it will need in order to thrive. The spray preparations are used more directly as tools for plant growth. 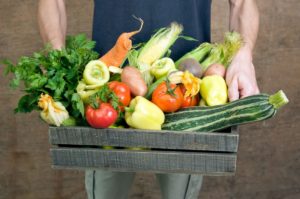 The one helps to stimulate root growth, vitalise the soil and increase plant sensitivity towards the living resources present in the soil environment, the second enhances vitality, nutritional quality and the sensitivity of the plant towards its atmospheric and cosmic surroundings. They work together as polarities and compliment one another. All these preparations are applied in minute quantities and influence the vitality and resilience of whole farm as well as enhancing the quality and flavour of the food produced.

Use of animal organs

The herbs, ground quartz and cow manure used for these various preparations undergo a unique process of fermentation in the seasonal life of the soil. In order to become fully effective in the soil context some of these materials have to be fermented within cow horns and other animal organ materials. These animal organ materials are obtained as by-products from animals destined for the human food chain. This animal material is used to hold the material while it undergoes fermentation. It has a catalytic effect on the fermentation process but does not form part of the resulting preparation. 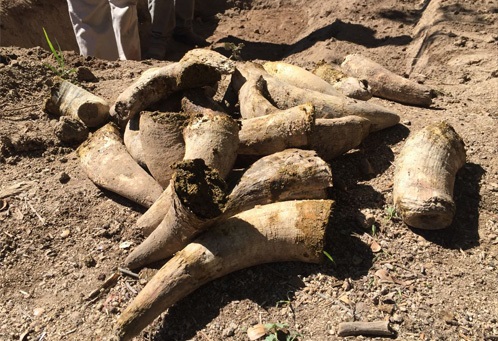 According to Goethe “nature invented death in order to have more abundant life”. The life of nature is a continuous process of dying and becoming. As stewards of nature farmers take responsibility for this process. What nature does randomly, the farmer has to do consciously. Domestic animals have accompanied farmers over many generations to assist with the building and maintenance of soil fertility. Their input is as valuable as that of all the myriad micro-organisms living in the soil, among plants and inside us. The biodynamic preparations used to support these living processes follow the same principles as those operating in nature.

All that has lived in nature whether animal or plant, decays and is transformed into something new. The difference is that on the biodynamic farm it is the human being who brings substances from the different kingdoms of nature together in quite new ways, commits them to the earth’s rhythmic cycles and then applies them to support the farm’s living processes. The small quantities of preparations used indicate that it is not the actual material – whether of plant or animal origin – that affects the soil and subsequent plant growth, but the non-physical, renewing impulse which is released through the process of fermentation.

It is this vitality, this life source which imbues the food we eat with quality and value. If we choose to exclude all animal products from our diet and rely on produce from a biodynamic farm, this vital quality in the vegetables, fruits and cereals will go a long way towards sustaining us in full health. Everything in nature and in farming is interconnected and there would seem to be no contradiction between pursuing a vegan diet and supporting biodynamic agriculture.