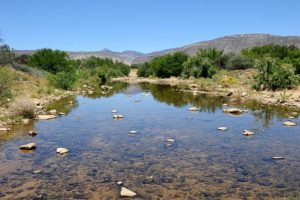 “The Swart River near Prins Albert in the dry South African Karoo, where underground water supplies are being threatened by high pressure fracturing or ‘fracking’ of underground gas reservoirs.” Image: Getty

A fracking well blow-up in Canada ought to be seen as a warning shot fired across the bows of fracking in South Africa.

This is the opinion of Treasure Karoo Action Group (TKAG) group Chairman, Jonathan Deal who said; “This incident demonstrates precisely why we have raised  serious concerns about fracking in South Africa.  We simply cannot allow any threat to South Africa’s water resources, never mind the other very real dangers this process offers.”

Fracking is currently banned or under some form of moratorium or restriction in more than 90 places, including five countries.

People forced to live with pollution and fear

“Here we have a situation where people in North America and Canada are, on a daily basis forced to live with polluting incidents and accidents. There can be no possible justification for the South African government to invest any more time on even considering fracking in this country until issues such as these have been settled by scientific consensus and an inclusive national debate,” said Deal.

“If  the South African government lifts the moratorium and issues any form of exploration licence for fracking under the current circumstances, the only recourse open to TKAG will be to seek the protection of our courts.”

TKAG is opposed to fracking in South Africa before independent comprehensive scientific research has been conducted, showing exactly what the impact of fracking could be.

A blowout in Canada

Deal’s comments relate to a widely reported well blowout on January 13 in Calgary, Canada. The blowout is currently being investigated by the provincial energy regulator (ERCB) in Canada.

In this incident, fracking fluid, under pressure from a well belonging to another company travelled through fault lines and fissures until it breached an older well hundreds of metres away, causing the fluid under pressure to blow out of that well.

Cara Tobin, board spokeswoman for the Canadian government said, “my understanding is that it appeared the fracking process affected the other well”. The ERCB admitted to press, “ERCB is aware of similar incidents of “communication” between wells as a result of fracking”.

‘Communication’ is an event in which the fracking process creates pressure, which escapes into an underground fault system.

“The fluids used to achieve the fracking process travel along natural fissures and weaknesses in surrounding rock until they migrate into an area where the pressure is absorbed. In this case, the path was to a well hundreds of metres away, and according to reports the different pressure caused that well to blowout,” said Deal.

A danger to the aquifers

Meanwhile, a retired Canadian mining engineer, Don Bester, who currently chairs the Alberta Surface Rights Group, said, “We’re concerned that these things are going to start damaging aquifers. If they hit another well, like this one here, what if they communicate and put all that frac (sic) fluid into an aquifer and destroy it?”.

Bester is concerned that ‘fracking propagates out so far that if they hit one of these natural fracture systems, they will just follow the natural channel straight up from a high pressure zone to a low pressure zone.’ And his view is supported by Matt Horne, a director of the Pembina Institute – a Canadian Environmental think-tank – “Incidents like this and the recent Environmental Protection Agency (EPA) study about pollution of Wyoming aquifers, all add weight to concerns being raised about hydraulic fracturing.”