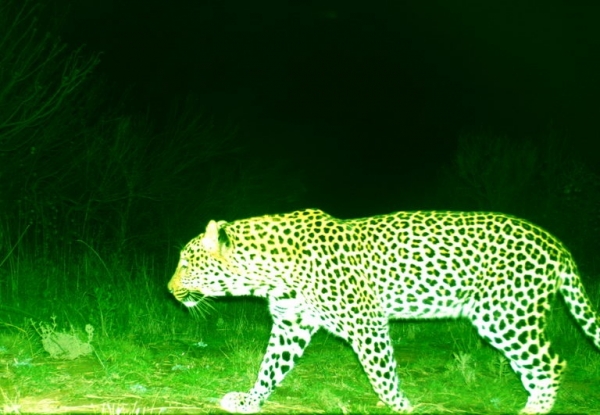 There has been great excitement at Vondeling Wine Farm, where a recently installed camera trap confirmed suspicions that a Cape Leopard has increased its territory to include the Paardeberg Mountain.

The leopard first made his presence known over two years ago. His paw prints were spotted, as well as faecal scat that demonstrated a diet including bones and porcupine quills. A roofing team working on an elevated house claimed to have seen him some months ago. Then, typical territorial scratch marks were discovered on a tree by the team currently completing a post-fire Botanical Survey Project, commissioned by the Paardeberg Sustainability Initiative (PSI) and Vondeling Wines.

The PSI is a community program of sustainable development incorporating the Paardeberg Mountain, currently listed in the top five most valuable biodiversity sites of the Western Cape’s fynbos biome. The PSI is registered as a WESSA [Wildlife and Environment Society of South Africa] Friends Group, and also houses the Paardeberg FPA [Fire Protection Association].

The camera trap also photographed some small antelope, a Civet Cat, a Caracul with a “Dassie” kill, porcupine and several baboons.