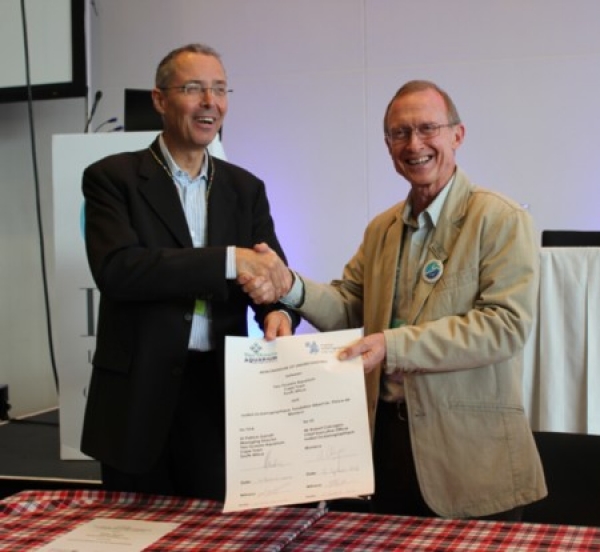 Shortly after London hosted the Olympic Games, the Two Oceans Aquarium in Cape Town hosted what Director Dr Patrick Garratt has dubbed “the Olympics of the global aquarium community”.

The International Aquarium Congress is the only global meeting of public aquariums. It takes place once every four years, and the bidding process moves around the world – from the Americas, to the Far East and Australia, and finally, every twelve years, to Europe, the Middle East and Africa. Bringing the congress to Cape Town was not only a ‘first’ for the continent of Africa – it was also the first time the congress had been held in the southern hemisphere.

On the first day of the congress at the Cape Town International Convention Centre, Dr Garratt extended a three-fold welcome to delegates from 40 countries: a ‘welcome home’ to Africa – the Cradle of Humankind; a welcome to South Africa – land of astonishing natural and cultural diversity; and a welcome to Cape Town, the Tavern of the Seas – a place that for centuries has refreshed and inspired travellers from around the world.

deep down we’re all one

Setting the scene for a congress that would focus to a large extent on how people relate to the sea and its creatures, Francois le Roux – otherwise known as the Ha! Man – conducted a moving performance entitled “Deep Down, We’re All One”, which integrated marine images, music and poetry [see the video clip below]. Beginning with the origins of life’s abundance in the oceans, the performance next represented the tension between nature and culture that us humans have created through our competitive and conquering ways. Reaching a cacophonous crescendo, the performance took a reflective turn, reminding us of our connectedness to all life on earth and suggesting that it is in appreciating the oneness of all life that we will find our hope and healing.

Lara Kirsten performed a poem she had written for the occasion, which included the following lines:

the whale within us all is sighing deep and heavy
the oceans are weeping
washing up tears on the shores of our senses
i look into the mirror of the ocean
i see how small and naked i am …
let us not stand dispassionate
our elemental living started in these dark depths
let our healing start here too …
the harmonies of water reshape our beings
to feel a true compassion for our great oceanic family,
because, after all,
deep down we are all one.

As if heralded by this performance, hope and resilience in the face of our challenges emerged as a strong theme of the congress.

The three main keynote addresses of the congress were delivered as part of the opening function. This was done in order to enable a number of local partners and guests, including Two Oceans Aquarium staff, volunteers and members, students and scholars, and colleagues from the environmental sector, to attend the welcome ceremony and hear these world-class speakers.

Camille Parmesan, a professor at both the University of Texas in the USA and the University of Plymouth in the UK, presented hot-off-the-press information on the impact of climate change on the distribution, breeding behaviour and sex ratios of both terrestrial and marine species around the world. Using the example of coral reefs, she emphasised that that conventional conservation efforts are as important as ever, as healthy ecosystems are significantly more resilient to the effects of climate change (e.g. coral bleaching events) than over-exploited and degraded systems.

Already we are starting to witness biological communities changing in response to climate change. Species are on the move, as regions in which they have lived for thousands of years become unsuitable for their survival. For some species, shifts in distribution of up to 1 000 kilometres have been recorded in the last 40 years. Unexpectedly, in some marine environments changes in species distributions have been even greater than on land. Furthermore, climate change is creating new types of habitats that have not existed on Earth during recent evolutionary times. We have no idea what mix of species will colonise these regions.

In the face of these rapid and unpredictable changes, Dr Parmesan made a provocative suggestion – certainly in the context of South Africa where so much effort has been spent in trying to address the issue of invasive alien species. As habitats change, many species will be unable to move naturally into suitable climatic regions. We may have to consider a process of ‘assisted colonisation’, moving species from their original environments to new ones, which may even include continents where they have never existed before. Clearly desperate times call for desperate measures – and aquariums, with their experience in the culturing, care and release of marine species, and the restoration of marine habitats, have an important role to play.

In his keynote address on the ‘Two Oceans’, Professor George Branch, who has made a life-long contribution to marine biological research and education at the University of Cape Town, confirmed that South Africa is witnessing significant changes in the distribution of marine species, such as pelagic fish and rock lobsters. This is having enormous impacts on both marine ecology and local communities. For instance, as shoals of anchovies and pilchards move eastwards, they move beyond the reach of the communities and fish processing factories that once benefited from their bounty – not to mention the many seabirds like African penguins and Cape gannets that depend upon them for food. Similarly, changes in the distribution of rock lobsters is having a profound effect on the populations of sea urchins and abalone around the Cape.

Author and researcher, Dr Elin Kelsey, has been conducting an empowerment evaluation for 40 aquariums in the USA that are involved in communicating about climate change and the oceans. She is passionate about exploring how conservation biologists, environmental educators and the public relate to hope and the environment. In her keynote address, Torrents of hope: Why emotions matter to aquariums, she warned that the tendency of environmentalists to communicate ‘doom and gloom’ makes people despondent, and fuels a culture of hopelessness. She challenged the congress to radically rethink the ways in which we relate to the planet, and to consider narratives of hope and resiliency as alternatives to ‘doom and gloom’.

move beyond the obituaries

voices of the youth

Unusually for an international environmental congress, the session on education was given pride of place on the programme just after the keynote addresses on the first day. And in this session, it was the youth who stole the show. Prior to the congress, Russell Stevens, Head of Education at the Two Oceans Aquarium, had coordinated an international video conference, Voices of the Future of the Oceans, involving youth via aquariums around the world. These young people discussed their concerns about the oceans, their hopes for the future, and their requests for the congress delegates. Two of the South African participants, both active members of the Two Oceans Aquarium’s Young Biologists programme, presented their feedback, including a declaration the youth had prepared. It was fitting that this youth declaration set the agenda for the congress.

Their recommendations are a valuable guide to all organisations involved in caring for the Earth:

By hosting the Eighth International Aquarium Congress, the Two Oceans Aquarium created a unique opportunity, as the congress theme put it, for ‘the global aquarium community to share experiences and collectively inspire change’. A moving opening ceremony, challenging and inspiring presentations, café conversation sessions that stimulated meaningful conversations, and opportunities to get (literally) immersed in the nature (think Gansbaai) and culture of the Cape – all these experiences energised the aquarium community to continue their vital work of inspiring humanity to love and care for this Blue Planet.