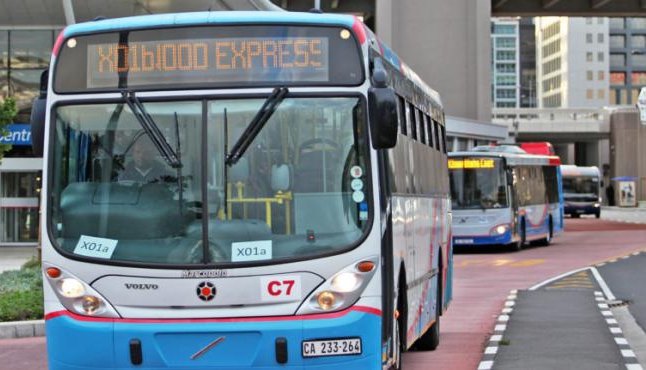 Cape Town has issued a call for tenders for the procurement of electric buses for the MyCiTi service, and will be the first municipality in the country to benefit from the latest alternative fuel technology. Picture: Willem Law

Here are the Major’s words:

In December I participated in a number of events in Paris at COP21, specifically dealing with the role that cities can play in pushing a more ambitious agenda on climate change.

I have come away from those deliberations more convinced than ever that cities have a pivotal role to play in both mitigating climate change and adapting to is worst impacts.

The engagements that I took part in were very different from the international negotiating process in that we weren’t arguing over commas and brackets but were actually discussing tangible projects that had been implemented or conceived of in cities around the world.

Cities to steal ideas from each other

One of the overriding message of all these engagement was from the Mayor of London, Boris Johnson, who implored cities to steal ideas from each other.

He was encouraging a partnership with cities around the world where the best ideas can be shared and implemented where appropriate.

I was especially grateful that Hastings Chikoko from the C40 was part of the Climate Coalition meeting because this is precisely the role that the C40 plays in ensuring that leading cities around the world can be spurred on to greater action and inspire new sustainable ways of doing things.

While we have come away from Paris with the sense that the world is finally taking climate change seriously, what still remains is a major emissions gap in terms of the national standards that countries have committed to.

This emissions gap will have to be bridged by cities across the world, taking actions that will put their urban populations on a far more sustainable trajectory.

The delivery of co-benefits to the poor and jobs

Cape Town has already started this journey, but our approach to climate change is to give specific priority to those projects that deliver co-benefits.

It is important that Cape Town leads the way in delivering projects which simultaneously reduce poverty and create much-needed jobs.

This is evident in our ceilings retrofitting project where the City is retrofitting State-subsidised homes that were built between 1994 and 2005 without insulated ceilings and weather-proofing as this was not included in the RDP subsidy provided by the National Government at the time.

This large-scale retrofit project has health, social, and environmental benefits.

The first phase of retrofitting 8 000 homes will create around 800 job opportunities through the Expanded Public Works Programme (EPWP).

This project supports our climate change actions to improve energy efficiency through a reduction in carbon emissions and electricity consumption.

In order to enhance energy security of the city and reduce emissions, Cape Town is determined to move ahead with procuring power from renewable energy independent power producers so that we can reach our target of sourcing between 10 – 20% of our energy from renewable sources by 2020.

We have initiated discussions with the National Department of Energy as cities in South Africa currently have to obtain permission if they wish to procure power from any other entity besides the State electricity utility, Eskom.

Rooftop PV panels to add to the City’s grid

Another pioneering initiative is where households and businesses generate renewable energy through rooftop photovoltaic panels and are now able to feed excess electricity back into the City’s grid, allowing us to diversify our energy supply.

We have already seen an uptake of these solutions in Cape Town and we are looking at ways in which it can be made easier and cheaper for households and businesses to implement these solutions on a wider scale.

It is projected that the greatest growth in emissions will come from our transport sector over the next 25 years and tackling this will require, among other things, changes in our urban form, coupled with major interventions to increase vehicle occupancy, more efficient vehicles and increasing public transport usage.

The City issued a call for tenders for the procurement of electric buses for the MyCiTi service.

If all goes according to plan, Cape Town will be the first municipality in the country to benefit from the latest alternative fuel technology and we will be one of the first cities in Africa to use electric buses for public transport.

We have also appointed a contractor to start the roll-out of Wi-Fi provision on MyCiTi buses so that we can lure more people onto public transport and out of their private vehicles.

This is another step towards reducing local greenhouse gas emissions and enhancing resilience to climate change.

Our Water Conservation and Water Demand Management (WCWDM) Programme has been an instrumental adaptation measure and was announced as the winner in the Adaptation Implementation Category in the 2015 C40 Cities Awards in Paris.

This is another example of co-benefits as up to 1 000 EPWP workers were employed to conduct ongoing door-to-door awareness campaigns to promote water conservation practices.

Through effective resource management and a shared responsibility with residents over a 15-year period, the WCWDM Programme has resulted in a reduction in demand or water savings of more than 30%.

We are determined to take more progressive action to address climate change.

If we are going to be more ambitious, the City will not be able to do it alone.

This will require partnerships with residents, businesses and various stakeholders if we are going to tackle climate change effectively and protect our planet while improving the lives of our residents.

Editor’s note: I wonder when the City will also start incorporating the original Camissa 7 streams of\Table mountain fresh water under the City, which now flows directly into the ocean? Think of the water that could be saved this way.