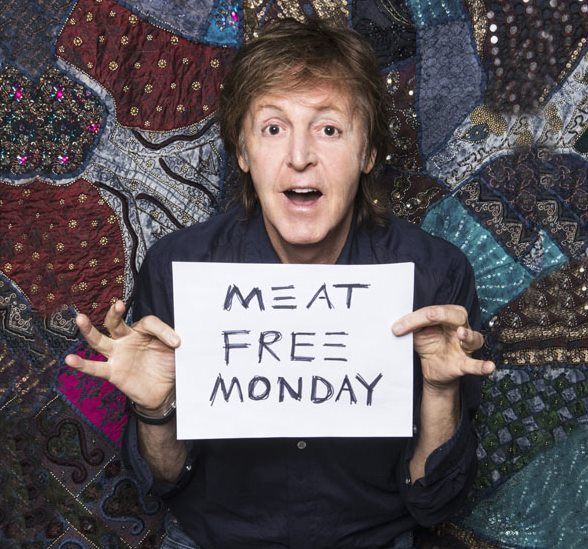 Paul McCartney on the “Out There” tour 2014, showing his support for Meat Free Monday.

Cape Town is the first African city, and one of seven leading cities in the world, to officially endorse Meat-Free Day for the sake of animal welfare, human health and climate change. The idea is that Capetonians pick one day a week where they don’t eat red meat, opting for more fruit, vegetables and grains instead. Former Beatle and well-known vegetarian Paul McCartney started the campaign.

There are many ethical problems inherent in factory farming. Countless animals are crammed into tiny spaces where they can hardly move, and they die without ever having seen the sun, the soil or a blade of grass. Factory farming also responsible for 18% of the greenhouse gases that cause global warming (more than all the world’s cars). The idea is to eat less meat and ONLY free-range meat, which is produced in a much more humane way that is less detrimental to the environment.

The notion is also being taken up in other cities around the world, such as San Francisco, Washington DC & Sao Paulo.

Beef farming is intensely energy intensive. For example, it takes the equivalent of a daily seven-minute shower for six months to produce just 500 grams of beef. According to the United Nations, a billion people go to bed hungry every day, whilst the Western world uses a third of the world’s grain harvest to feed livestock.