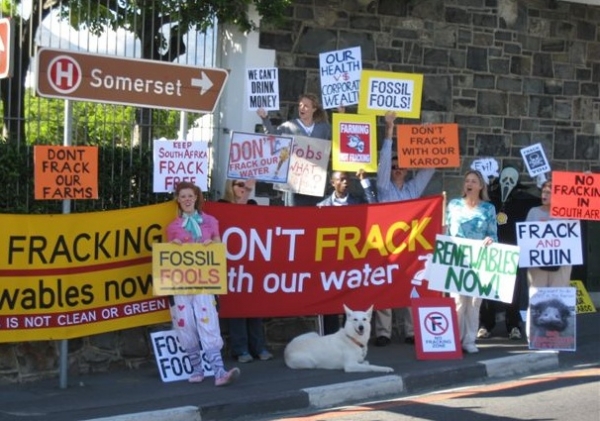 A group of concerned Capetonians, in partnership with the NPO Climate Justice Campaign, gathered for a protest at the 18th Africa Oil Week

At the Africa Oil Week, various heads of state, multinational oil and gas companies and other interested parties will discuss such topics as ‘The Scramble for Africa’ and ‘Africa’s Oil and Gas Future’, including shale gas developments.

The group staged a peaceful protest at various access roads to the Waterfront, on Monday 31 Oct and Thursday 3 Nov, to send a clear message to the delegates, the SA government and fellow citizens, that we cannot simply continue with ‘business as usual’.

‘While our fossil-fuel based economy has brought our civilisation this far, it is now time to head in a new direction, or face a total system collapse’, says Marina Louw of Climate Justice Campaign.

‘With climate change, the world is teetering on the brink of the worst calamity mankind has ever faced, and the time for fossil fuels is now over. Ordinary citizens are demanding a just transition to a sustainable, green economy, based on truly renewable sources of energy.’

‘Our current model of consumer-driven economic growth, which is largely based on fossil fuel, is unsustainable’ says Phillip Newmarch,an architectural consultant and environmentalist from Cape Town. ‘We are living beyond the means of our planet’s ecosystems and resources. There are limits to growth and if we do not transform our society and economy, we face a synchronized, related crash of the economy and the ecosystem.’

In particular, the group is deeply opposed to the proposed hydraulic fracturing (fracking) in large parts of South Africa. ‘Introducing shale gas into our energy mix is not compatible with our commitments to mitigate climate change. Shale gas is still a fossil fuel, it is not renewable and the process of fracking is an immensely carbon intensive process,’ says Louw.

‘Renewable technologies are available that will yield quicker returns, create many jobs and stimulate the economy at a local level and we demand that our government aggressively pursue these alternatives instead.’

“James Leape, the director-general of WWF International, has warned that relying on gas is not a bridge but a threat to the development of renewable energy. According to Leape, ‘if we build the future economy on shale gas, we will have lost the fight to controlÂ¬climate change’,’ reiterates Louw.

‘Governments in other parts of the world have struggled to regulate the booming fracking industry, with devastating environmental and health consequences, resulting in a growing backlash from local communities, with France and other areas banning the technology. South Africa simply does not have the regulatory capacity or expertise to ensure that our water resources and environment will not be compromised. We would like to see the current moratorium on fracking licenses extended at least until 2014, when the USA EPA is due to conclude their in-depth study on fracking.’