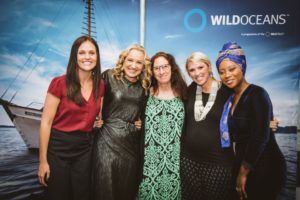 A Marine Protected Area (MPA) Celebratory Dinner was held at the dockside, next to the WILDOCEANS’ Research Vessel Angra Pequena in Durban on Tuesday evening 16 April, to celebrate the announcement of 20 new and expanded MPAs by South Africa’s Cabinet at the end of last year, and to honour all those who played a role in the expansion.

The event, hosted by WILDOCEANS (a programme of the WILDTRUST) and the Department of Environmental Affairs (DEA), highlighted the bold action taken in October last year, bringing the total protection of the oceans around South Africa up to 5% from 0.4%.

“It is now clear that cabinet supported and agreed to 20 MPAs that would be established on reaching the 5% target and what it means is that there is further work to bed them down and this is the process that is underway right now,” commented Judy Beaumont, Deputy Director General Oceans & Coasts of the Department of Environmental Affairs. 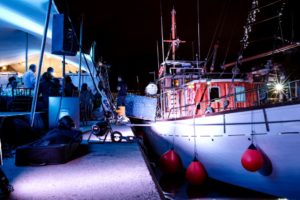 The beautiful setting of the MPA celebratory event alongside the RV Angra Pequena. Image: Casey Pratt 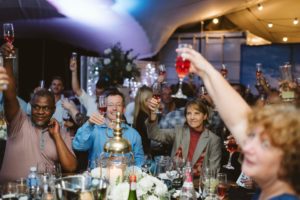 “We don’t celebrate enough. We don’t stop, pause and take time to celebrate and reflect on achievements,” said Beaumont.

The event was indeed a celebration – an emotional video was shown depicting the journey of arriving at 5% and all the heroes and heroines that played a part. The late Minister Edna Molewa was also acknowledged, and a tribute was played linked to her role in paving the way for the 5% MPA announcement.

Members from a youth movement called Youth4MPAs performed a powerful poem called ‘I met a woman yesterday’ which spoke about South Africa’s oceans that are undergoing a healing and rejuvenating process as we increase its protection.

Another youth group called ‘Change Agents’ performed a funky and unique rendition of the South African National Anthem in collaboration with local performer Lauren Laing, which they actually filmed and submitted as part of the News24 Anthem Project Competition.

The evening was closed with a preview of ‘Our Oceans’, a WILDOCEANS feature film produced by Off the Fence and supported by the KZN Film Commission and the African Coelacanth Ecosystems Programme (ACEP). ‘Our Oceans’ set to be released in July this year profiles marine expeditions aboard the RV Angra Pequena, raising awareness and knowledge about South Africa’s spectacular marine ecosystems, charismatic animals, as well as the learning journey of the scientists and ‘Ocean Stewards’ on-board.

“This has been and continues to be an exciting and challenging journey that is fundamentally about collectively protecting our extraordinary ocean heritage. Each one of us has a role to play each one of us is part of this journey. Let’s celebrate the progress and look ahead and make the walk towards making the MPAs a reality,” concluded Beaumont.