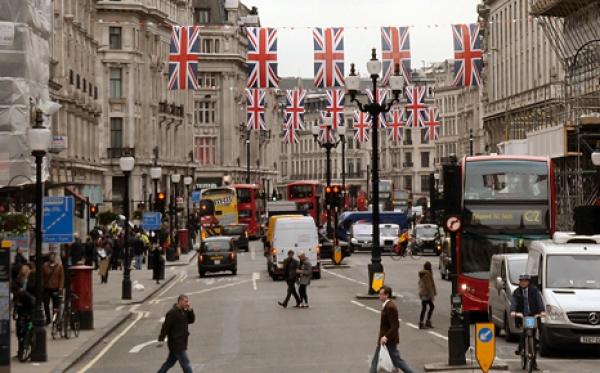 Regent Street, London, became a pedestrian-friendly zone in July with the street closing to vehicles to combat high levels of pollution in central London.

Recent emissions figures from Transport for London showed central London roads, Oxford Street and Piccadilly, were ranked among the worst 15 roads in the capital.

“It’s an experiment and we’ll see how it works,” Peter Bourne, development manager for the Crown Estate told RTCC.

Despite the plans, Westminster Council confirmed to RTCC that there are no plans to make the closure permanent.

Regent Street, adjacent to pollution-heavy Oxford Street, is one of the most iconic shopping streets in the world and plays a vital role in making the West End an economic powerhouse that contributes over £5.5 billion to the UK economy each year.

The Crown Estate, landlord of Regent Street and the UK’s sixth largest landowner, is taking this situation into its own hands and working to make Regent Street a more enjoyable experience to visitors, workers, residents and shoppers by closing it down every Sunday in July.

Regent Street will be closed to vehicles to host Summer Streets which is a “series of transformational temporary projects to facilitate the rebalancing of the current spatial allocation and further develop pedestrian priority on Regent Street in the long term”.

This is expected to set the landowners back by £300,000 for the four weekends, but worth the trouble if it equates to the removal of 204 buses that travel down Regents Street every hour.

Studies by researchers at King’s College London have found that during the hours of previous vehicle bans, black carbon and nitrogen dioxide levels were between 50% and 75% lower than on a day of normal operation.

Bourne hopes that the event will help people “colonise the street”, and encourage other businesses on Regent Street and perhaps even local schools to host future events.

“After we’ve convinced Westminster and the Mayor that the world won’t stop if we do this, we’re hoping that we will gradually get it to be every Sunday in the summer,” said Bourne.

Westminster Council said it has “no plans to close Regent Street permanently as is an important route through the centre of London,” although it acknowledges that Oxford Street is the borough’s most polluted road.

Delivery vehicles leave behind much space

The Crown Estate’s long-term goal is to reduce traffic in Regent Street through a number of initiatives.

Bourne said: “25% of traffic volume is delivery vehicles, and we have managed to reduce delivery levels by over 80% to the retailers already participating in the scheme.”

The company offers Regent Street businesses an innovative delivery solution that consolidates deliveries with those of other Regent Street retailers, taking many of the diesel lorries off the road and replacing them with fewer, cleaner, electric vehicles.

The majority of vehicles passing along Regent Street are diesel fuelled, which researchers at King’s College London found “is more closely linked to health impacts than particulate pollution from other sources”.

Another solution to lower pollution levels in the area is through a more sustainable refuse collection service.

“Every restaurant was using a different refuse collector, probably in addition they had glass, kitchen waste and cardboard collections, and these were all on separate lorries,” said Bourne.

The Crown Estate used the same method as with deliveries and consolidated the refuse collection among retailers and restaurants, while at the same time doing all the recycling for them.