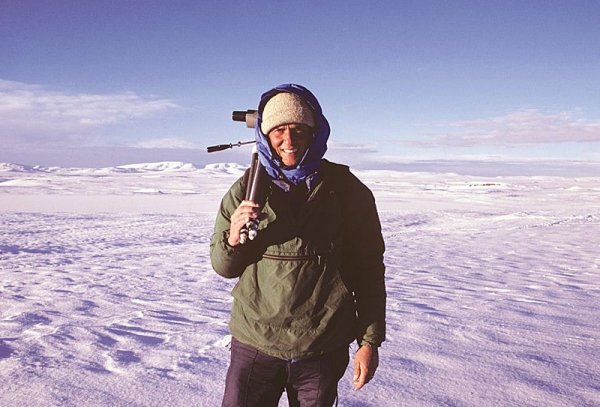 Renowned biologist George Schaller (pictured in main photo) has been traveling to the Tibetan Plateau for nearly three decades, studying its unique wildlife. But with climate change and overgrazing taking a toll on the landscape, he reports, scientists and the Chinese government are working to preserve one of the planet’s wildest places.

Once the pristine roof of the world, climate change and overgrazing have taken a toll on its harsh beauty.

Chang Tang. It is a hard name for the great northern plains of the Tibetan Plateau in China, a name that conjures visions of wild emptiness, silence, and desolation. Most of the Chang Tang lies above 14,500 feet, a land where icy winds howl and snow falls even in summer.

Yet these harsh uplands support a unique community of large mammals including Tibetan antelope, or chiru; wild ass, or kiang; gazelle; wild yak; snow leopard; and Tibetan brown bear, to name a few.

I first went to the Chang Tang in 1985, attracted by its little-known wildlife and its remote vastness, an area as large as Italy and France combined. Once, in 2006, my Tibetan and Han Chinese colleagues and I traversed the northern part of the Chang Tang in winter, and for the first 1,000 miles—roughly the distance from New York to Chicago—we did not see anyone. 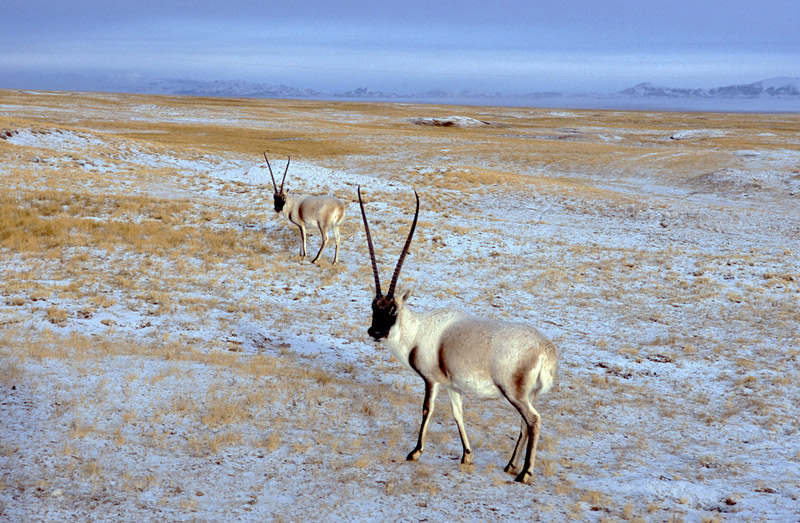 Yet in this era of global warming and expanding human populations, no place—not even the farthest reaches of Tibet—can escape profound change. Since first visiting Tibet more than a quarter-century ago, I have returned year after year, witnessing that transformation with my own eyes and listening to Tibetan nomads—with their herds of domestic yak, sheep, and goats—describe it. They say that weather is more erratic, sand storms more frequent and violent, and springs and wetlands are disappearing as the permafrost melts with warmer temperatures.

Scientific investigations confirm this change. An estimated 95 percent of the thousands of glaciers on the Tibetan Plateau are retreating. Temperatures have been rising at 0.3 °C (0.5 °F) per decade since the 1970s, double the world average. The turf layer of the vast alpine meadow habitat in the eastern part of the Tibetan Plateau is drying and dying, its organic matter releasing a massive amount of carbon dioxide and methane, and drastically reducing livestock production.

These shifts in Tibet’s climate are occurring as human population growth, development of roads and mines, economic changes in the lives of nomads, degradation of rangelands, poor livestock management, killing of wildlife, and other problems are threatening the Tibetan Plateau, one of the most imposing geographical features on earth.

At 965,000 square miles, the plateau is almost as large as the contiguous United States west of the Mississippi, and roughly half of it lies above 15,000 feet. Its huge bulk has an influence on regulating weather patterns, such as the Asian monsoon, and its great rivers—fed, in part, by seasonal meltwater from 46,000 glaciers—provide water to 1.4 billion people in the lowlands of China and southern Asia. 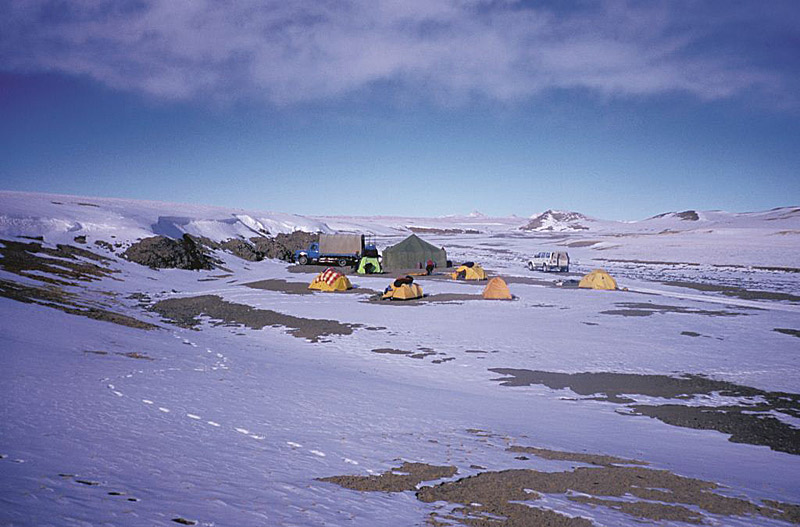 My colleagues and I had originally come to study wildlife, but we have been increasingly taken away from the pleasure of observing animals to mitigating conservation problems that threaten the ecological integrity of the region and imperil the lives of species and livelihoods of nomadic people. Today, thanks to the efforts of the scientific community and the Chinese government, large regions in the Chang Tang and Tibet have been set aside as conservation areas, and steps are being taken to reverse the degradation of the rangelands that are so vital to the region’s residents and its ecology.

This conservation work in Tibet has taught me important lessons. One is that nothing in nature remains static, and may change rapidly. Another is that the simple word “conservation” implies far more than saving biodiversity. Solutions must be based on solid science, sound policy, and local support, drawing on the knowledge, interest, and participation of the area’s communities.

Such issues were far from my mind 27 years ago when I started research with my Chinese colleagues on the distinctive and little-known community of large mammals inhabiting the high Tibetan Plateau. The chiru, or Tibetan antelope—the males adorned with two-foot horns rising straight from the head—particularly intrigued me, as it migrated long distances and its travels defined the ecosystem. I also was drawn to the luminous grandeur of the chiru’s homeland, the Chang Tang. To date, I have made 26 journeys there, spending a total of more than three and a half years.

In that time, my colleagues and I have confronted many conservation challenges, including a period during the 1990s when as many as 300,000 chiru were illegally slaughtered and the wool smuggled to Kashmir to be woven into expensive shahtoosh shawls and sold as fashion statements to the world’s wealthy. Alerted to the slaughter, local governments sent out anti-poaching teams and confiscated guns, and we also publicized the killings internationally. 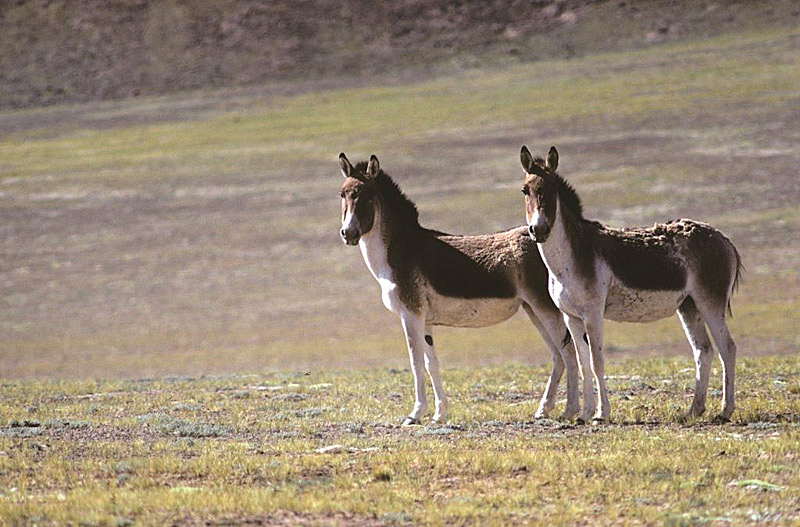 Chiru numbers are slowly on the increase—about 150,000 are thought to exist today—thanks to greater awareness and better protection. But poaching continues; recently Nepal intercepted a shipment of 2,500 pounds of chiru wool, representing about 11,500 dead animals.

Two problems, above all, now threaten the Tibetan plateau. The first is degradation of rangelands, the result of ill-advised government policies and a growing human population, which has tripled from roughly 1 million in 1950 to nearly 3 million today. Starting in the early 1990s, communal pastures were divided into household plots, turning nomads into small-time ranchers. The government encouraged and subsidized the fencing of pastures and promoted maximum livestock production. Settled for much of the year in houses rather than in moveable tents, households soon began to overgraze their lands.

Half of the rangelands are now moderately degraded and erosion is in places severe. The many fences also impede the movements of chiru, kiang, Tibetan gazelles, and other animals. Some try to leap over or crawl under fences and become entangled, left to slowly die. In 2005, the government initiated a program entitled “ecological migration” to relieve pressure on the rangelands by relocating many households into new settlements, where they are given houses and an inadequate monthly government subsidy. But such resettlement created unanticipated social problems, such as continual idleness—some of the affected Tibetans said they felt like “empty sacks that can’t stand up by themselves.”

I collaborated with various organizations, including the Wildlife Conservation Society’s China program, in trying to alleviate conservation problems, such as the ones with chiru. Starting in the late 1990s, I became closely affiliated with the staff and students of Peking University, especially after professor Lu Zhi established the Center for Nature and Society and the Shan Shui Conservation Center. We focused on promoting cooperation in resource management between Tibetan communities and the government, incorporating traditional Tibetan knowledge and livestock management into conservation plans. We have offered better fence designs and have encouraged a return to the traditional communal grazing practices, which give pastures time to recover. 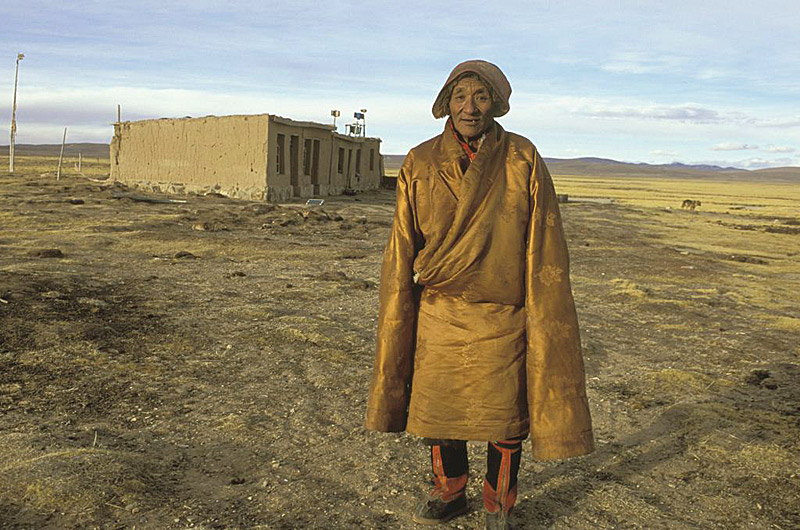 The deterioration of rangelands is also being hastened by rapid climate change. Chinese scientists monitoring 680 glaciers in Tibet have shown that nearly all are in retreat and that many could disappear this century. China considers the eastern half of the Tibetan Plateau its “water tower,” as the region is the source of the Yellow, Yangtze, Mekong, and Salween rivers. About 75 percent of the arable land in northern China depends on irrigation from rivers originating on the Tibetan Plateau. “To protect your rivers, first protect your mountains,” the Chinese emperor Tao Tu Yu said 3,600 years ago.

The warming of the plateau has increasingly caused wetlands, ponds, and other surface waters to dry up. And the melting of permafrost, which covers about half of the Tibetan Plateau, is leading to a lowering of the water table and a loss of soil moisture. Tibet’s Alpine meadow habitat is expected to more rapidly dry out, crack, and slump, with the exposed soil eroded by wind and precipitation, causing it to increasingly disappear. The Stipa grass on the Alpine steppe, a favored food of wild and domestic ungulates, is short-rooted and may die out in many places.

Recognizing the value of Tibet to the ecology of the entire country, the Chinese government has taken important steps to preserve large parts of the plateau. A sprawling area in Chang Tang was established as a nature reserve in 1993, and three contiguous reserves were added in the adjoining provinces of Xinjiang and Qinghai from 1996 to 2007, giving protection to about 174,000 square miles, an area larger than California. In 2000, the government established the 59,000-square-mile Sanjiangyuan Reserve—meaning Three-River-Headwaters—in Qinghai province, encompassing the headwaters of the Yangtze, Yellow, and Mekong. Such reserves will be vital as climate change forces species of plants and animals to adapt, move, or die.

In November 2011, China’s State Council approved a far-sighted, community-based program of ecological protection for the Sanjiangyuan region. My colleagues and I are now focusing our research and planning on Sanjiangyuan, contributing to the efforts of the provincial and national governments. Based on the awareness that their livelihoods depend on a healthy rangeland, a number of communities have set aside land for wildlife, are checking the condition of pastures, patrolling their land against intrusion by outsiders, and monitoring wildlife numbers and water levels in lakes and streams. 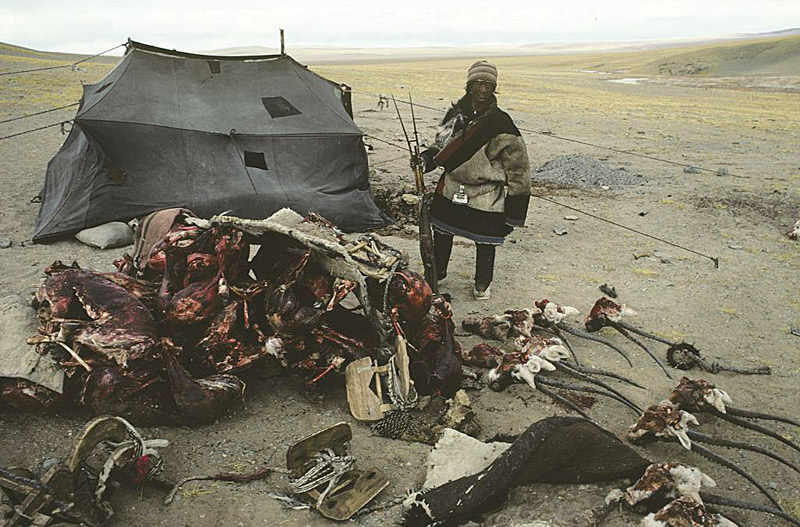 This imaginative new conservation model of giving management rights to communities is now being slowly expanded throughout the Sanjiangyuan region. It will mean that a core of people in every community—a total of perhaps 20,000 throughout the region—will have to be educated in the basics of ecology and trained in the details of monitoring and protecting their environment. It demonstrates how ideas generated by communities and a small and dedicated organization such as the Shan Shui Conservation Center can have a far-reaching impact on policy and society.

To achieve a harmonious balance of rangelands, wildlife, and livestock will require an immense effort by private and government organizations alike. But the opportunities in Tibet and Chang Tang are exciting, allowing us to address the conflicting demands of conservation, development, and the livelihood of the region’s pastoral people—and not just in an area of modest size, but in a vast landscape larger than many countries.

The spiritual strength of the many monasteries in the region is also needed in this ambitious effort. The world’s religions have played far too small a role in the environmental movement. Tibetan Buddhism, with its respect and love for all living beings, is particularly responsive to conservation. Most communities on the Tibetan Plateau revere a nearby sacred mountain, and monasteries have sacred lands, creating a network of small protected areas over the landscape. We have already involved some monasteries in monitoring wildlife and in spreading the conservation message to surrounding communities, following the vision of the 12th century Tibetan saint Milarepa:

Do if you like that which may seem sinful
But help living beings
Because that is truly pious work.