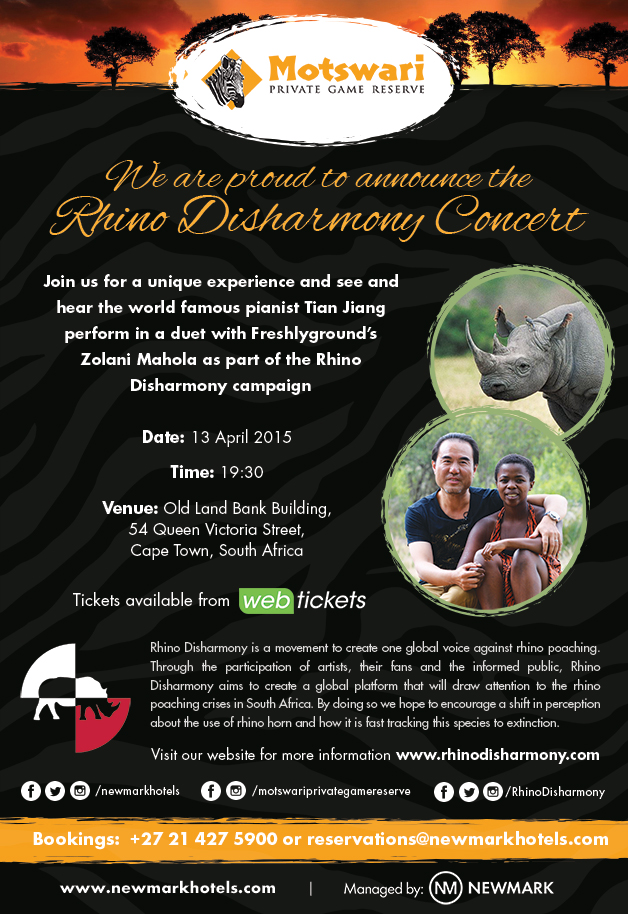 On 13 April 2015, a sensational concert is being given at the Old Land Bank Building in Cape Town when world-famous Chinese pianist and composer, Tian Jiang and the darling of South African music, Zolani Mahola, lead singer of Freshlyground, will perform and help raise awareness for Rhino Disharmony.

The Rhino Disharmony concert is showcasing art, photography and sculpture which, when combined with music, will create a powerful emotional and intellectual journey towards better understanding the impact of Rhino poaching.

Tian Jiang will not only play classical pieces but also, for the first time, some of his own compositions which he will perform together with Zolani Mahola in tribute to the rhino.

The concert is not only raising awareness about the scourge of rhino poaching but the artists and participants are also creating a platform for an apology from humankind to the animals that have been violated.

“The concert allows people the freedom to create their own impressions without having to resort to graphic and often disturbing images,” says Fabrice Orengo de Lamazière of Motswari Game Reserve who, together with Newmark, Hotels & Lodges, is heading up the project.

Attending the concert, there will also be dignitaries from across the globe, as well as local Rhino ambassadors such as artist Beezy Bailey, Barend Dewet, Marion Geiger and Andre van der Merwe, whose installation, ‘Rhinosaur’ is currently a much talked about feature on the Sea Point promenade in Cape Town.

Rhino Disharmony has united artists around the world with the aim that they may use their art to arrest people’s attention about what’s happening to the rhinos in South Africa and on the African continent.  Rhino Disharmony works with the other fund-raising organisations to raise awareness but especially it is founded on the fact that art, music and performance can dig deeper into people’s awareness and perhaps even initiate a shift in thinking and perception.

It is not the first time that Tian Jiang is visiting South Africa. In late March and April of 2013 he completed his first piano concert at Motswari Private Game Lodge in the Kruger National Park. This feat led to an invitation to return to South Africa in March 2014 for an encore tour, ‘Tian in the Wild’.  On May 28th, 2013, Tian performed at a sold out concert at Carnegie Hall.

Zolani Mahola (33) was born in Bhisho in the Eastern Cape Province, South Africa.   Together with six other musicians, she formed Freshlyground in Cape Town in 2002.  After Freshlyground published their second album, Nomvula, in 2004, The Sunday Times described Mahola as one of South Africa’s best and most inspiring young singers.