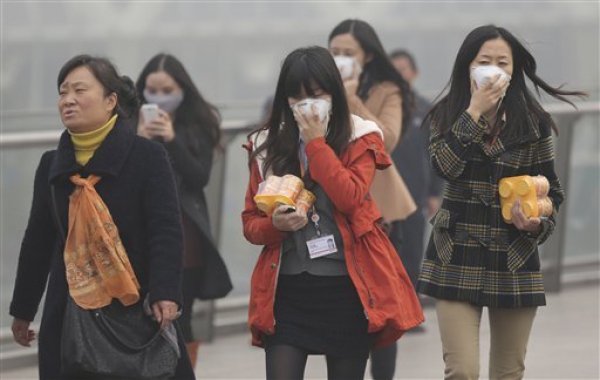 Pollution costs China billions of dollars a year in health and other losses, but that hasn’t slowed China’s growth. Necessity places this great city ahead of most in fixing humanity’s shared global warming problem.

Its economy is No. 2 behind the U.S., and it is the world’s largest auto market and growing. Last year new car sales jumped 7 percent to 15.5 million. Used car sales were up 11 percent to 4.8 million, and are expected to rise steadily to 20 million by 2020.

Migration out of rural areas to big cities continues for better jobs, wages and way of life, adding to congestion, Yang Ning explained during a tour of Beijing.

At the Second World Emerging Industries Summit in Wuhan, speakers compared what’s occurring in China to that of developed nations more than a century ago. The post-World War II period left U.S. factories supplying goods to countries whose own plants were destroyed in the war.

But by the latter half of the 20th century, developed nations caught on to the production-related problem of pollution. In the U.S., the Environmental Protection Agency was established in 1970 to try to keep the air, water and land clean.

Yet it has not been enough to slow the advance of global warming from the worldwide fossil fuel fires of industry and transportation. Human activity is creating greenhouse gases, destroying the ozone layer, increasing the planet’s temperature and melting polar ice.

The more that nations like China with its 1.3 billion people push to industrialize, the more pollution will be pumped into the air. On a trip to Europe three years ago, I was impressed with the scaled-down size of the vehicles there.

Smart Cars and similarly sized vehicles dominated European roadways. I didn’t see that in Beijing, Wuhan or Hong Kong on a recent trip.

The planet can’t accommodate a nation China’s size with America’s fossil fuel appetite. But from the tour Yang provided, China’s impressive history and its innovation show that it is on the road to improvements.

We walked through the Forbidden City, constructed decades before Christopher Columbus got lost in the Americas on his shortcut to Asia. Yang took us to the Temple of Heaven and on rickshaw rides to Hutong courtyard homes, which typically were more than 200 years old and housed families of 20. We walked through Tiananmen Square, site of a 1989 pro-democracy protest that helped change this nation, and climbed a portion of the Great Wall.

China’s ability to reinvent itself gives the planet hope that change will come from this huge nation. During the 2008 Summer Olympics, the pollution was cut partly by limiting vehicle use.

Not far from the Great Wall new family housing features solar panels filling rooftops of multistory structures. China is one of the world’s leaders in solar panel production. Non-fossil fuels account for 9.6 percent of energy consumption. It is expected to be 15 percent by 2020.

China, like the U.S., must do more to retrofit existing buildings with green energy. Yang explained that homes have switched from burning coal to being heated more efficiently with electricity.

Transportation of the future must include pollution-free vehicles. It can start in China and spread to the rest of the world.

Solar, wind and geothermal energy have to help fill our future energy needs. Living green is how we can save ourselves and the planet.