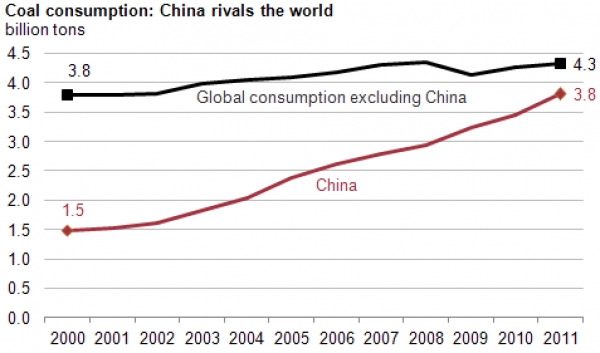 As the data illustrates, China is now burning almost as much coal as the rest of the world combined. And despite impressive support from Beijing for renewable energy and a dawning understanding about the dangers of air pollution, coal use in China is poised to continue rising, if slower than it has in recent years.

That’s deadly for the Chinese people — see the truly horrific air pollution in Beijing this past month — and it’s dangerous for the rest of the world. Coal already accounts for 20% of global greenhouse-gas emissions, making it one of the biggest causes of man-made climate change. Combine that with the direct damage that air pollution from coal combustion does to human health, and there’s a reason why some have called coal the enemy of the human race.

Of course, there’s a reason why coal is so popular in China and in much of the rest of the world: it’s very, very cheap. And that’s why, despite the danger coal poses to health and the environment, neither China nor many other rapidly growing developing nations are likely to turn away from it. For example, this report from the International Energy Agency notes that by 2017, India could be burning more importing as much coal as China. That’s likely to remain the case in poor nations until clean energy can compete with coal on price — and that day hasn’t come yet.

Burned by the gigaton

The EIA’s chart also shows how limited President Obama’s ability to deal with climate change really is. The reality is that the vast majority of the carbon emissions to come will be emitted by developing nations like China — and much of that will be due to coal. As we’ve reported, the U.S. has reduced coal use and cut carbon emissions in recent years, even in the absence of comprehensive climate legislation, thanks to tougher air-pollution regulations and cheap natural gas from fracking.

Yet even as coal has waned in the U.S., it’s still being burned by the gigaton in other countries. We won’t beat climate change until we’ve beaten coal, but I’m not sure there’s much the U.S. can do to persuade China or India to quit cheap energy — no matter the cost.