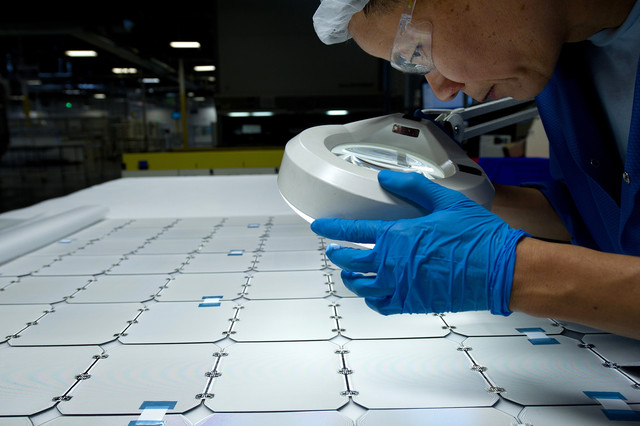 Solar developers around the world will install record capacity this year as a thriving Chinese market drives growth, a Bloomberg survey showed as manufacturers in the $102 billion industry began to return to profit.

About 44.5 gigawatts will be added globally, a 20.9 percent increase on last year’s new installations, according to the average estimate of nine analysts and companies. That’s equal to the output of about 10 atomic reactors. Last year new capacity rose by 20.3 percent, after a 4.4 percent gain in 2012.

China became the biggest solar market in 2013, helping to end a two-year slump for manufacturers in the industry. State support for photovoltaic projects in the country, the largest energy-consuming nation, has seen installation costs tumble as the government speeds renewables’ development to curb pollution.

“After two years of a punishing downturn, the global solar industry is on the rebound,” said Ash Sharma, senior research director for solar at Englewood, Colorado-based IHS Inc. (IHS:US) “Worldwide PV installations are set to rise by double digits in 2014, solar manufacturing capital spending is recovering, module prices are stabilizing and emerging markets are on the rise.”

Growth in China, Japan and the U.S., where solar-panel prices have dropped and governments have ramped up subsidies, is making up for lower installations in Europe, the industry leader until 2012. U.S. and Asian producers such as SunPower Corp. (SPWR:US) and Yingli Green Energy Holding Co. (YGE:US) are restoring profits following two years of losses caused by a glut of panels.

That’s reflected in solar share prices, which have risen in the past year. The NYSE Bloomberg Global Solar Energy Index (SOLAR) has jumped more than 70 percent in the period, with several stocks more than tripling in value.

Yingli, based in Baoding, China, expects to report its first profit in three years as soon as the second quarter. Its home market, where solar developers installed as much as 12 gigawatts last year, may build more in 2014, according to BNEF. The government has set a 14-gigawatt cap for installations to prevent runaway growth.

“The 2013 figures show the astonishing scale of the Chinese market,” said Jenny Chase, head of solar analysis at BNEF. “PV is becoming ever cheaper and simpler to install, and China’s government has been as surprised as European governments by how quickly it can be deployed in response to incentives.”

Japan may install record capacity of about 10.5 gigawatts this year, while the U.S. will build as much as 5.3 gigawatts, BNEF estimates show. The companies that survived the slowdown have emerged stronger and better prepared, Chase said.

As the industry oversupply shrinks, large manufacturers of polysilicon, a raw material used in solar equipment, and panel makers active in Asia should gain the most, IHS’s Sharma said.

“We are not expecting bottlenecks, but the supply-demand gap is closing.”