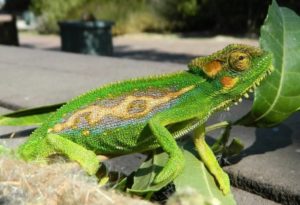 The City of Cape Town is encouraging residents to keep a special eye out for the Cape Dwarf Chameleon, which is classified as a vulnerable species. This will assist the City in tracing where these chameleons occur.

With the onset of autumn, these chameleons, also known as Trapsuutjies in Afrikaans, should be delivering offspring ahead of the rains, which usually occur around this time of year. Residents should therefore look out for baby chameleons, which tend to be brown in colour and at birth, can fit on the tip of one’s forefinger, but soon grow much bigger.

Cape Dwarf Chameleons give live birth to between five to 15 babies at a time. Newborns then drop and stick to vegetation, after which they are immediately self-sufficient.

The grown chameleons vary in shades of green, and grey with their average maximum length around 14 cm. Those in denser, closed vegetation areas tend to be larger and brightly coloured. It’s tongue can be as long or even longer than its body and has been recorded to shoot out at a speed of 20km/h to catch prey. They feed primarily on small insects and drink by licking dew or rain drops from leaves or other surfaces.

‘Residents will have better luck in finding these creatures on warmer days. Being cold-blooded, they are more active when the sun is out and are likely to be found taking shelter deeper in vegetation on cold and windy days. Anyone interested to assist the City in tracing where these chameleons reside in Cape Town, can join the survey by uploading a photo of the chameleon found on the iNaturalist app or website. Residents are reminded to please respect the lockdown rules, and to remain on their properties while on the lookout for the chameleons,’ says the City’s Mayoral Committee Member for Spatial Planning and Environment, Alderman Marian Nieuwoudt. 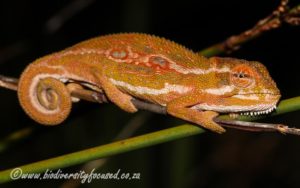 A common misconception is that chameleons change their colour for camouflage to blend into the environment. When, in fact, chameleons change colour as a way of expressing mood and communicating. They also turn a darker colour to absorb more heat or a very pale pastel colour to reflect light and absorb less heat.

‘If residents have difficulty finding them during the day, doing the survey at night with a bright torch could be a better option and a more adventurous activity for the kids. The Cape Dwarf Chameleon tends to be near the tips of branches at night and appears as a pale milky colour in the torch light,’ said Alderman Nieuwoudt.

The chameleon’s historical habitat has become severely fragmented due to urbanisation and agricultural transformation. Additional losses are expected to occur because of rapid climate change.

Once again, we are reminded of how incredibly diverse and special the biodiversity is in Cape Town.

The City asks that residents record their findings but refrain from moving chameleons from their suitable habitats; they are also never to be kept in captivity. By simply checking the garden refuse and vegetation while pruning, one can prevent these chameleons from accidentally being transported to a landfill site.