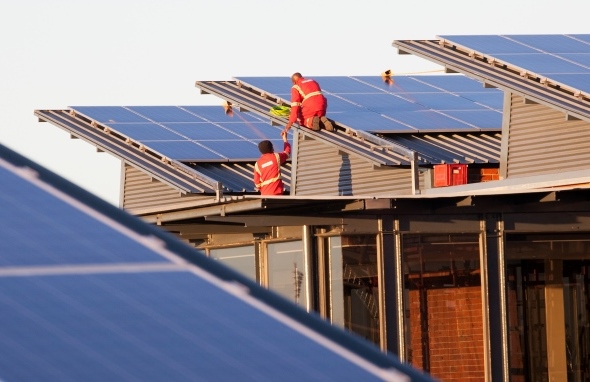 They commend Black River Park for leading the way in the commercial real estate sector by utilising large-scale solar power systems to generate environmentally sustainable energy. Black River will be producing some of the electricity to meet their own consumption demands.

It is envisaged that this will be the first of many small-scale embedded generation (SSEG) installations to be connected to the City’s grid. City officials are hopeful that the provision of such opportunities will help stimulate the green economy by increasing demand for solar panels and other sources of alternative energy. This will in turn help create jobs in this sector.

The Black River Park project is in line with the City’s commitment to creating a sustainable city that addresses the challenges facing our environment. The City of Cape Town has set itself a target of sourcing 10% of its electricity from renewable energy resources by 2020 and the roll-out of the small-scale embedded generation tariff supports this goal.

Cape Town, along with all cities throughout the world, has to contend with the negative consequences of climate change. South Africa’s electricity generation is notoriously environmentally unfriendly, as it relies to a great extent on the burning of coal. For every 1 kilowatt hour of grid electricity consumed, 1 kg of carbon dioxide is released into the atmosphere.

Our over-reliance on fossil fuels for our energy needs cannot continue unabated, and we as a City need to do everything possible to pursue alternative, cleaner sources of energy.

For more than a year, the City has been running a project to find a solution which allows consumers to feed power back into the grid and to receive an offset doing so.  This has been a complex process as numerous factors have had to be addressed, including: the establishment of appropriate tariffs; identification of suitable metering systems which can measure power flow in two directions; and the implementation of automated billing systems which take into account both the purchase and sale of electricity.

Black River Park’s solar project at the 74 000 m² office park is the largest integrated photovoltaic plant in Africa. Their panels cover an area of 11 000 m², which is just over two full-sized rugby fields, and generate between 20 – 30% of the complex’s electricity requirements.

Their PV installation has already saved around 1 300 tons of coal through the use of renewable energy. It has produced around 1 368 megawatt hours, which is equivalent to keeping 157 Cape Town houses running for a year. This innovative project underscores the value of using green energy and taking advantage of the City’s programme to allow for offsets in exchange for the feeding into the grid of excess electricity.

Consumers who wish to feed SSEG electricity into the municipal electricity grid need to have a bi-directional advanced meter infrastructure credit meter installed by the City at their own cost and take their electricity supply at the appropriate SSEG tariff.
Guidelines and application requirements can be found on the City’s website. Interested parties are encouraged to contact the City for further information.