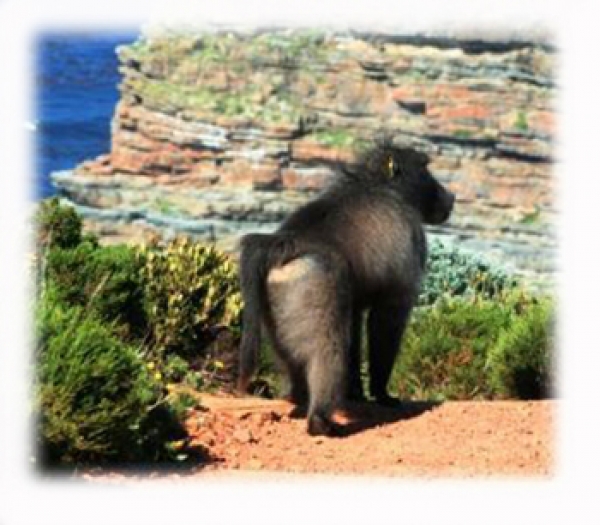 According to a new protocol baboons can be shot for minor misdemeanours in suburbs around the Peninsula. Jenni Trethowan of Baboon Matters lost the contract to manage the Baboon Monitor Project started 11 years ago to protect the last remaining Chacma baboons of the Cape Peninsula.

In 1998 the baboons gained protective status through her efforts. The Monitor Project has helped to protect the baboons from laws that sadly still apply to the rest of South Africa’s baboons, which can be killed at will. No sooner had Jenni been taken off the Monitor Project than a new protocol concerning dispersing males was rushed through despite objections.

This new protocol makes room for baboons such as Bart, a dispersing male who has not stayed with his natal troop and not settled into another troop on the peninsula (there are too many mature males in the peninsula troops), to be killed.

For thousands of years adult male baboons have moved from the peninsula to find new troops further inland. Nowadays, because of city development, the traditional route through the Cape Flats to the Hottentots Holland Mountains has been cut off. This has forced baboons like Bart to either risk their lives crossing the Cape Flats or to stay in the suburbs as lone males, tempted by easy food. The City of Cape Town and Cape Nature Conservation refuse to translocate these males to a new troop because they feel there is no conservation benefit, even though translocation is an option set out in the new protocol.

NSPCA has specified to Cape Nature that the baboons cannot be shot by a sharp shooter, but need to be captured and then killed humanely by injection. The new service provider has attempted to catch Bart unsuccessfully, spending R12 000 on vet bills. From my experience as an animal communicator, encouraging a baboon into a trap can be amazingly successful when you tell baboons why they are being trapped, where they’re going, and if the intentions are for the good of all – and of course if the baboons agree with your take on the matter. Currently Bart knows that the intent of those trying to capture him is not in his interests.

Please sign the online petition, and lets all hope that the authorities will work with compassion instead of distancing themselves from the animals in their care.