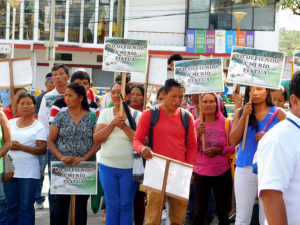 On November 26, a coalition of civil society organizations and law professors submitted an amicus brief to Ecuador’s Constitutional Court calling for the protection of the Piatúa River based on the Rights of Nature and Indigenous rights.

The Piatúa River is under threat from a hydroelectric project that Ecuador’s government approved without the free, prior, and informed consent of Indigenous Kichwa communities. The project is suspended as the Constitutional Court reviews the case.

While all rivers and other ecosystems possess rights under Ecuador’s constitution, the amicus brief recommends urgent protections for rivers with outstanding natural and cultural values, including the Piatúa River. The amicus brief also highlights other deficiencies, errors, and omissions in the hydroelectric permitting process. Finally, the amicus brief supports Kichwa communities who assert violations of their own Indigenous rights.

“Ecuador’s government must begin to apply the Rights of Nature in practice, including by rejecting unnecessary dam projects that fragment ecosystems and negatively impact Indigenous territory,” said Constanza Prieto Figelist, the Latin American Lead at Earth Law Center, which is amongst the groups that submitted the amicus brief. “Today, our coalition presented a blueprint for Ecuador to enforce the rights of rivers in a strong and practical manner.”

The Piatúa is a wild and free-flowing river which drains out of the rugged Andean cloud forests of the Llanganates Mountains in the Ecuadorian Amazon. It provides an intact ecological corridor as it passes through montane rainforests down to the humid tropical rainforests of the Napo River basin. The Piatúa River is one of the last rivers in this region to avoid contamination from widespread deforestation, gold and gravel mining, dams, and other threats.

Species in this region are declining at breakneck speeds. The 2020 Living Planet Report found a 94% decline in monitored vertebrate populations between 1970-2016 for tropical subregions of the Americas, the most of any region in the world. The proposed hydroelectric project stands to exacerbate this trend. 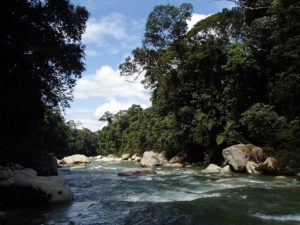 Native Kichwa-speaking Indigenous families have inhabited the Piatúa watershed for centuries and lived in a traditional manner until the first road was opened to this area in 2007. These Indigenous communities have a deep respect and appreciation for the Piatúa River, which they rely upon for food and water and believe has special curative properties. They have always lived harmoniously with the river.

Pablo Shiguango, who was born and raised along the Piatúa River in the Kichwa community of San Juan de Piatúa, states “The Piatúa River has an incalculable value from the cultural perspective and cosmovision of our people. The Piatúa River provides life-bearing sustenance and well-being to our lives.”

The Piatúa River is also a destination for international paddle sports tourism. River enthusiasts share similar respect and values for the river and joined together with the Indigenous communities to present the constitutional demand to uphold the rights of the river, including its right to flow freely. They share a mutual respect for the river.

“The Piatúa River in Ecuador offers one of the most premier whitewater experiences that I have found. The Piatúa River attracts kayakers for its crystal-clear waters, incredible forests and bird life, and the friendly local communities who call this river home,” said Darcy Gaechter, a prolific kayaker and author of the book Amazon Woman.

“The Piatúa deserves to be protected for the benefit of future generations and for nature itself.”

In 2008, Ecuador became the first country in the world to constitutionally recognize the Rights of Nature. However, Rights of Nature advocates argue that these rights are neither regularly nor adequately enforced. Ecuador’s government rarely considers the Rights of Nature in permitting decisions on projects that have major ecosystem impacts—mining, hydroelectric dams, new road projects, and so forth. While the courts have upheld Nature’s rights on occasion, such as a 2011 case ordering the restoration of the Vilcabamba River in the wake of a harmful road widening project, such rulings are sporadic and inconsistent.

“Our amicus brief provides Ecuador’s Constitutional Court with practical guidance to enforce the rights of rivers and all other ecosystems in practice,” said Monti Aguirre, the Latin American Coordinator at International Rivers.

“The Rights of Nature can successfully work in practice if we develop clear standards for its enforcement, which our amicus brief aims to help achieve.”

Globally, the Rights of Nature are now recognized to some extent in over a dozen countries. This includes Colombia, which has issued a series of major court victories for the Rights of Nature, and even the United States, where a handful of Native American tribes and local communities have passed Rights of Nature laws, declarations, and resolutions. The Convention on Biological Diversity’s post-2020 global biodiversity framework also recently promoted the Rights of Nature in its updated zero draft, which is up for adoption in 2021.