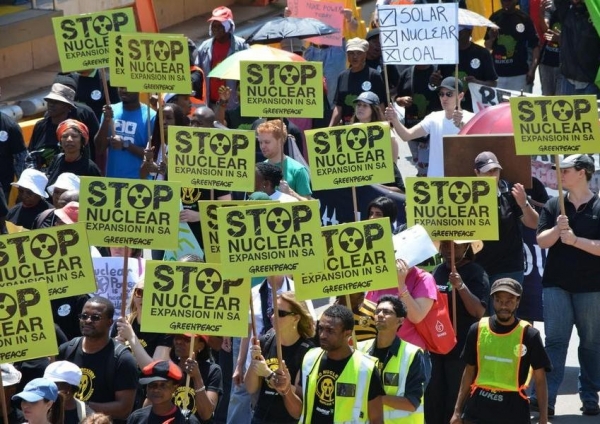 Thousands of people from civil society groups across Gauteng took part in a march to protest against South Africa’s nuclear expansion plans. The activists marched from Pieter Roos Park to Beyers Naude Square, where they handed over a memorandum to the Presidency. Smaller protests and placard demonstrations happened simultaneously in Durban, Cape Town and Bantamsklip..

Members of Earthlife Africa, Greenpeace Africa, Justice and Peace, and Ceasefire formed the alliance with the purpose to raise concerns about the cost of the new build project, the safety of nuclear power and the lack of transparency and accountability in the nuclear sector.

According to Earthlife Africa’s Makoma Lekalakala “The country’s new nuclear build is estimated to be at least R1 trillion in public funds. The cost for the nuclear infrastructure build will ultimately be passed down to South Africans which means we are heading for devastating poverty amongst millions of already impoverished South Africans” 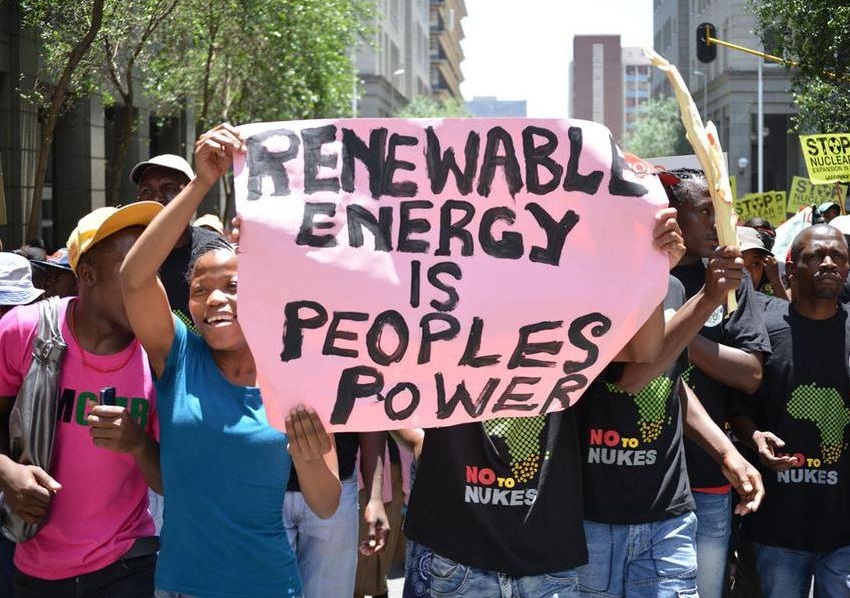 Since Fukushima, several countries around the world have moved away from nuclear energy. While the world sees nuclear as dangerous and unsafe, the South African government approved a nuclear expansion plan barely a month after the Fukushima disaster and has remained adamant that this is the best option for the country.

“Government has refused to listen to the people. They can ignore a few but they cannot ignore thousands. It is irresponsible for the South African government to want to expose their people to the threats of nuclear contamination as we recently witnessed in Fukushima” said Greenpeace Africa’s climate and energy campaigner Ferrial Adam. 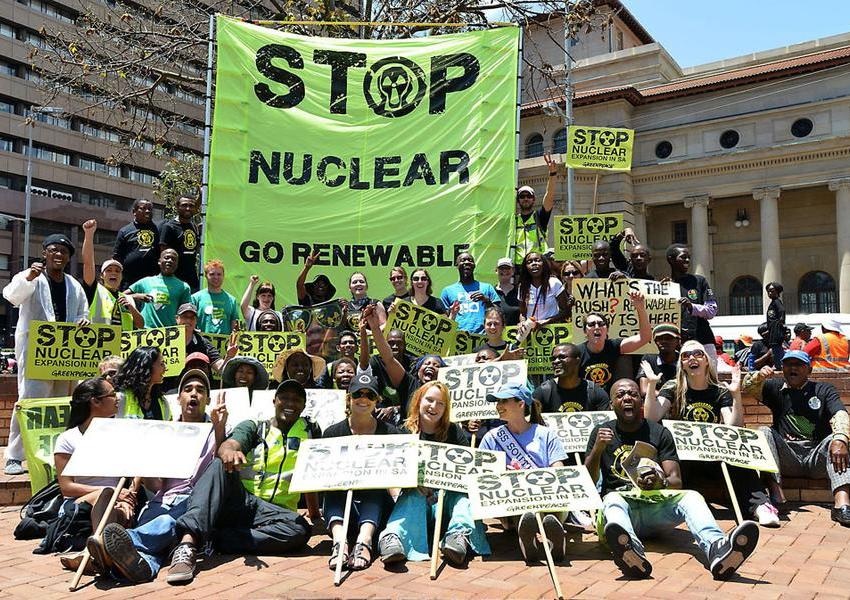 “Civil Society will be watching the nuclear energy procurement process very closely. The nuclear industry has often functioned under a veil of secrecy. We have the right to know and we will demand that the procurement processes are open and transparent. The era of secret deals like the arms deal must come to an end” added Adam.

“Ultimately we want the government to heed our call for just energy solutions. Nuclear energy is not the answer,” concluded Lekalakala.

In support of the main event in Johannesburg where Earthlife Africa, Greenpeace Africa, Justice and Peace, and Ceasefire were staging a march to demonstrate support for a nuclear-free future for our country, a few smaller events were held in Durban, Cape Town and Bantamsklip. I attended the Cape Town event outside of parliament.

The Facebook event page showed many people registered as attending, though we ended up with approximately 15 showing up all in all. We gathered outside of the parliament building at around 10am and were met by Michael Baillie of Greenpeace Africa who distributed yellow and black banners stating “STOP nuclear expansion in South Africa”.

The event was captured by two or three freelance photographers otherwise no other media was present. I suspect there was not enough time for notifications to be sent out as the support events were added almost at the last minute. 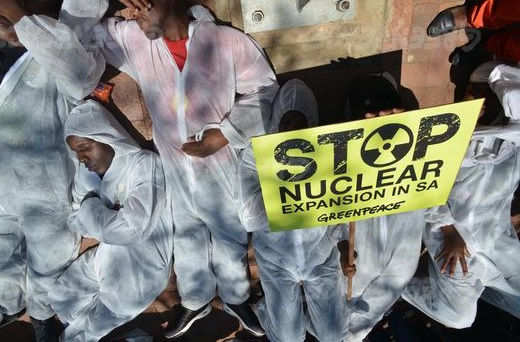 We displayed our banners at the passing motorists and tourist buses to the happy sound of supporting hoots, cheers and thumbs up. After an hour we called it a day. Before parting, Michael spoke to all of us about the facts surrounding the real risks and dangers of nuclear energy, about South Africa having some of the best renewable energy resources on our planet, the fact that more and more of the major economies in the world are phasing nuclear out and, in the face of that and recent nuclear catastrophes, our government’s decision to install another 9,600MW over the next 20 years.

It was disappointing to see so few people make the effort to support a campaign that affects every single one of us for the rest of our lives and future generations. That said, it was wonderful to meet new people who are willing to make the effort to try to actively influence our leaders’ decisions for the good of us all. I look forward to working with them all again. We need to expand our numbers through educating more fellow South Africans on the facts and showing them that we CAN make a difference if we work together. We must encourage them to stand up and make their voices heard!

All photos by Mujahid Safodien for Greenpeace Africa. See his full set here.