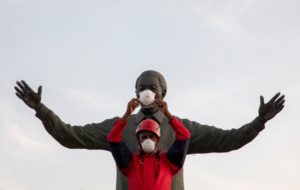 This World Environment Day we face the reality that more than 9 out of 10 people globally are breathing unsafe air.

“Clean air isn’t a luxury; it’s a basic human right. It’s not acceptable that so many people around the world are being forced to breathe polluted, toxic air. More and more people are having to deal with the terrible health impacts and they’ve had enough – they’re rising up and demanding solutions,” said Greenpeace International Executive Director Jennifer Morgan.

“This is a public health crisis we can fix by transitioning away from polluting fossil fuels to renewable energy and investing in clean transport. This transformation is already underway in some countries – it’s not a technological challenge but a political one.”

Coal burning is the number one source of air pollution worldwide. The World Health Organisation estimates that air pollution kills at least 20 000 people a year. In South Africa, Eskom’s polluting coal fleet is responsible for the premature deaths of more than 2 000 people every year and a Greenpeace analysis of satellite data has revealed that Mpumalanga is one of the worst nitrogen dioxide pollution hotspots in the world.

In China, the host of this year’s UN World Environment Day event, air pollution shortens lives by an average of three years. But while China records dangerously high air pollution levels, it has also seen some of the most dramatic progress. Levels of hazardous PM2.5 fell by 35% between 2013 and 2017 as a result of strict air pollution policies and a flatlining of coal consumption.

“Coal kills, but South Africa is making slow progress in the war on air pollution. What we need is real political leadership to take decisive action – and with a newly appointed cabinet, the time is ripe for it. Air pollution is putting people’s lives and our constitutional right to a healthy environment at risk. Government needs to hold polluters accountable in order to address this silent killer and to create a cleaner, fairer and more sustainable future for all of us, before it’s too late,” said Melita Steele, Senior Climate and Energy Campaign Manager for Greenpeace Africa.

Greenpeace calls on the South African government to urgently implement a plan for the Just Transition, and to phase out coal-fired power stations by 2040.