Cleaning up the nearly 20,000kg of waste from the Old Mutual Two Oceans Marathon in Cape Town this past weekend was no sweat for Nampak Liquid and Plastics SA. Together, they’ve supported the extensive cleanup operations that form part of the event’s successful management strategy.

In line with their commitments, Nampak Liquid supplied 136,000 250ml HDPE bottles and Plastics SA employed 110 people to help cleanup the Chapman’s Peak leg, which is a marine conservation area.

At the same time, Nampak Corrugated provided 1,000 cardboard bins and Nampak Recycling spearheaded an awareness campaign to stop runners from littering along the 56km route.

Above: John Kieser and his cleanup crew.

All waste is sorted for recycling. According to Waste Plan, who was responsible for the event’s comprehensive waste management programme, the recycling rate was 84% in 2010, 88% in 2011 and 89% in 2012. 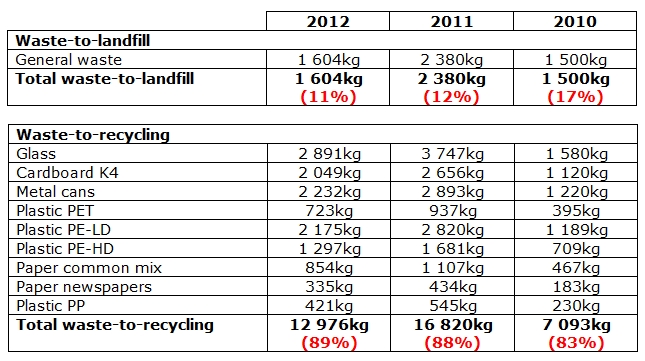 Nampak has been involved in the Old Mutual Two Oceans Marathon since 2009.

“Our sponsorship provides a unique platform to showcase our products and sustainability initiatives in a very practical and relevant way,” says Philip de Weerdt, the Nampak Executive responsible for the Rigid Plastics cluster of businesses and the newly elected Chairman of Plastics SA. “By decreasing total waste-to-landfill and increasing total waste-to-recycling year-on-year, we’re helping give a whole new meaning to the event’s positioning as ‘The world’s most beautiful marathon!'”