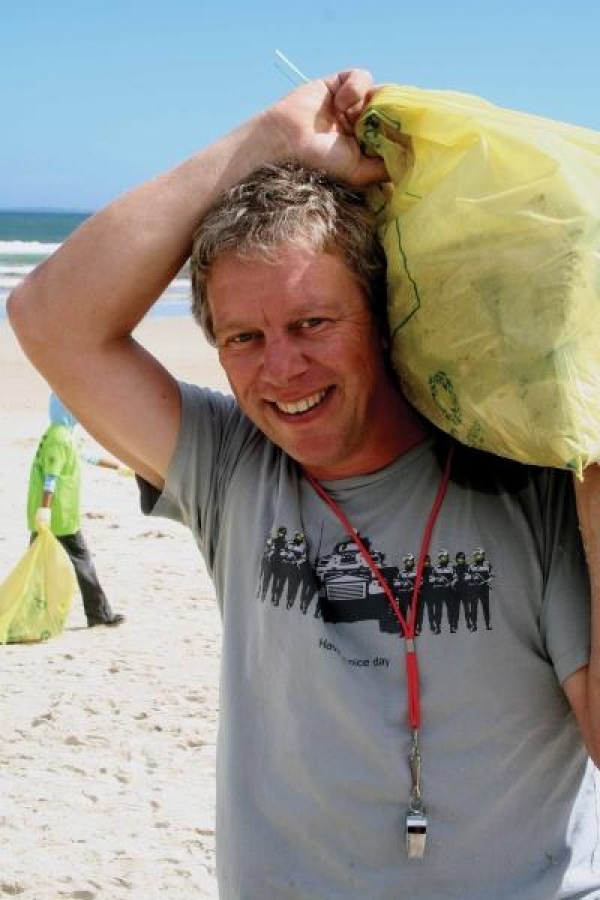 With Summer nearing, Capetonians can once again look forward to lounging on the iconic beaches that stretch around the peninsula.

Spending long, hot days relaxing on the sand and staring out over the ocean is undoubtedly a happy prospect. The idea of those pearly beaches being covered in litter is never part of the fantasy. And it should never become be a reality. That is why Saturday 17 September, marked the 26th International Coastal Cleanup (ICC), to rid beaches around the globe of unsightly and harmful litter, but also to encourage locals to look after these magnificent sites.

Over the last 25 years, the ICC has become the world’s largest volunteer effort for ocean health and South Africa is a proud contributor to this initiative. Plastics SA, Ocean Conservancy and KZN Conservation Services worked together this year to organise the event.

‘On this day, South Africans joined millions of volunteers around the world and from all walks of life to pick up everything that litters our beaches, ranging from cigarette butts and food wrappers to lost fishing nets and major appliances,’ said John Kieser (top photo), Environmental Manager of Plastics SA and national coordinator for the ICC. 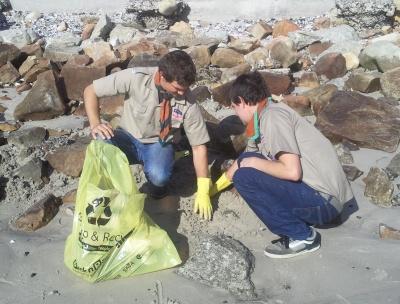 Activities started at 9am and since South Africa was playing in the World Cup at this time, many might have decided not to join in. Still, the outcome exceeded all expectations and organisers believe that even more volunteers participated than previous years. At last year’s events, more than 20 000 volunteers removed a total of 62.65 tons of litter and covered a total distance of more than 1000km along the country’s coastlines.

The enthusiasm continued this year with volunteers gathering everything unnatural they could find at beaches, rivers, estuaries and even underwater. School groups, children and scouts were seen running around wearing over sized gloves, getting exited about spotting litter in the sand. Every item found was also recorded as part of research into the dominant form of factory produced waste going into our oceans.

‘We work closely with Ocean Conservancy to compile and analyze the data we receive after each year’s clean up. Ocean Conservancy then publishes the world’s only item-by-item, location-by-location snapshot of marine debris in an annual report. By understanding what is out there, we can work together on solutions,’ Kieser explained. This year’s results will be available at the end of October.

Environmental authorities are aware that cleaning beaches alone is not the solution to the bigger problem, namely careless littering. ‘We realise that clean-ups alone can’t solve the marine debris problem, we need to stop it at the source,’ Kieser said. 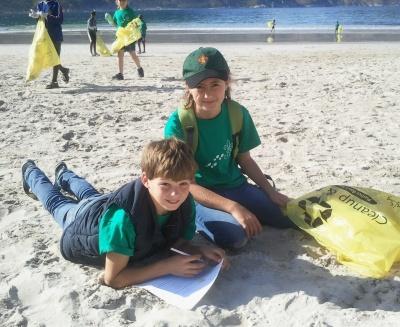 This effort is undoubtedly the perfect platform to create awareness around cleaning our environment. The bright yellow bags that were used to throw waste in definitely caught the attention of passers by.

A week of beach greening

The beach cleanup day served as culmination of Clean-Up South Africa week, which took place between 12 and 17 September and encouraged South Africans to pick up litter in their communities while refraining from committing this evil themselves.

‘We are not just focusing our efforts on ocean beaches, but are encouraging the public to clean-up their areas where they live and work,’ Kieser said. This effort goes much further than merely cleaning beaches once a year. Keeping our areas clean should be a way of life and not merely a once off event. 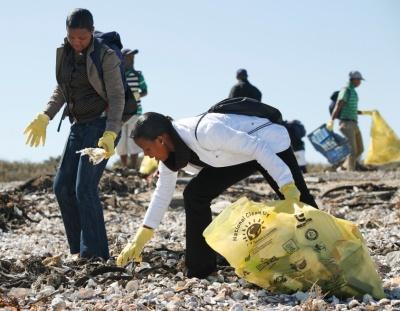 According to Douw Steyn, Environmental Director of Plastics SA, Clean-Up South Africa week’s main aim was to raise awareness and encourage every South African to contribute in the simple task of keeping the country clean.

‘Regardless of your age, background or income, each South African has a responsibility to help rid our country of litter and recycle waste – whether they are at school, in an office block or even an old age home. Every paper you pick up and every plastic wrapper you throw into the recycling bin makes a huge difference,’ Steyn argues.

Plastics SA are truly showing their commitment toward countering the problem of marine litter. They recently signed the Global Declaration for Solutions on Marine Litter on behalf of South Africa and are adamant on finding solutions for this critical problem.

One of these solutions are to teach the public that recycled plastic is a sought after substance. With the message, ‘Plastics: Too valuable to waste,’ they want to inform people that there is a growing demand for it because it’s versatile, economic and reliable.

You can also help these incredible efforts by simply recycling in your own homes. In fact, 28% of packaging waste is already being recycled in South Africa, with more than 240 plastic recycling companies working to make plastic reusable. And don’t be concerned about the energy being used to recycle plastic, because less energy goes into recycling than producing plastic packaging materials.

So if you happened to have missed the coastal cleanup, do not fret, because you can make a change in your own homes everyday. Also, nothing keeps us from picking up litter as we stroll down our favourite sandy beaches this Summer.