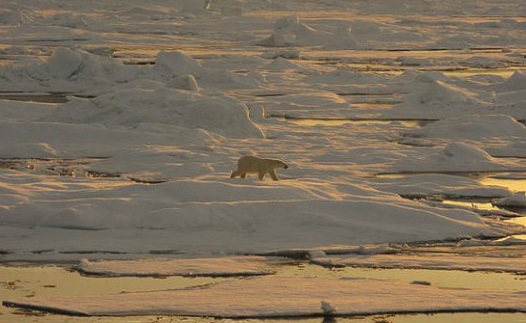 Huge waves rolling across Arctic Ocean regions that up until recent times have been permanently locked solid with a sea ice cover is seen as more evidence of a warming Earth, researchers say.

That sea ice is beginning to experience an onslaught of 16-foot swells that have the potential to break up the sea ice more rapidly than the melting it has experienced over several decades of warming temperatures, they warn.

Historically, the Beaufort Sea above Alaska has remained almost totally enclosed in ice year round, without areas of open water sea winds need to work on to generate large swells or surf.

But that has changed dramatically with climate change, researchers say.

“In recent years, the seasonal ice retreat has expanded dramatically, leaving much of the Beaufort Sea ice-free at the end of the summer,” says Jim Thomson of the University of Washington.

That allowed the researchers to anchor wave-height sensors to the sea bottom in the central Beaufort in 2012 that recorded swells as high as 16 feet.

Such waves can batter the remaining ice cover while delivering tremendous amounts of energy, they said.

“The melting has been going on for decades,” Thomson says. “What we’re talking about with the waves is potentially a new process, a mechanical process, in which the waves can push and pull and crash to break up the ice.”

High winds in the Arctic are a continuous phenomenon and combined with the increasing presence of open water areas in summer have the potential to create huge swells, he says, and initiate a feedback loop in which the newly opened water is subjected to more winds creating yet more and bigger waves.

“As the Arctic is melting, it’s a pretty simple prediction that the additional open water should make waves,” he says.

Warming-driven melting along with the new process of waves breaking up sea ice could result in open water covering the entire Arctic Ocean by the middle of the century, the researchers write in the journal Geophysical Research Letters.

A summer free of ice would be “a remarkable departure from historical conditions in the Arctic, with potentially wide-ranging implications for the air-water-ice system and the humans attempting to operate there,” they wrote.

Additional research will see additional sensors placed under the surface of the Arctic Ocean in an effort to analyze the increasing incidence of heavy seas and the physical processes of ice retreat, the researchers say.

The data obtained could be vital as oil exploration activities and shipping companies take advantage of a longer ice-free season regularly occurring in Arctic Ocean waters.

They could face elevated risks of big swells, Thomson says.

“Almost all of the casualties and losses at sea are because of stormy conditions, and breaking waves are often the culprit,” he says. “At this point, we don’t really know relative importance of these processes in future scenarios.”