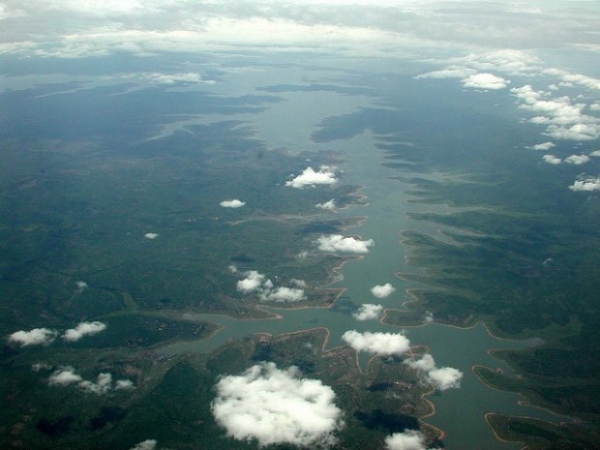 A recent study has found that so much water may be lost in the Volta River Basin due to climate change that planned hydroelectric projects to boost energy and food production may only tread water in keeping up with actual demand. Some 24 million people in Ghana, Burkina Faso and four other neighboring countries depend on the Volta River and its tributaries as their principal source of water.

Specifically, the researchers with the International Water Management Institute (IWMI) and their partners concluded that the combined effects of higher temperatures and diminished rain could mean that by the year 2100, all of the current and planned hydroelectric projects in the basin would not even generate as much power as existing facilities do now. Meanwhile, there would only be enough water to meet about a third of irrigation demand.

IWMI and other centers involved with the CGIAR’s Research Program on Climate Change, Agriculture and Food Security (CCAFS) are drawing attention to the Volta study as leaders from across Africa gather in Ghana for Africa Agriculture Science Week 2013, under the theme “Africa Feeding Africa.”

“An unreliable supply of water for irrigation will have serious consequences for a region where most people are farmers. Beyond that, there is an urgent need to shift more food production away from rain-fed systems that are subject to the vagaries of climate to irrigated agriculture. This study shows that this strategy is not as dependable as we once thought,” said Matthew McCartney, PhD, a principal researcher and hydrologist at IWMI, which is part of CGIAR, an international consortium of agricultural research institutes.

McCartney served as lead author for the study, The Water Resource Implications of Changing Climate in the Volta River Basin, along with colleagues from Ghana’s Council for Scientific and Industrial Research and Germany’s Potsdam Institute for Climate Impact Research.

Climate models show temperatures in the Volta Basin rising by up to 3.6 degrees Celsius over the next century—which the scientists warn could significantly increase water lost to evaporation. They also indicate average annual rainfall could drop by about 20 percent. McCartney and his colleagues calculated that water flows in the Volta region could fall by 24 percent through 2050 and by 45 percent by 2100, depriving the basin of water that countries are counting on to drive turbines and feed farms.

“The smart development of water resources is a crucial part of Africa feeding Africa, and we need to understand how climate change might alter water availability in vulnerable regions like the Volta Basin,” said Robert Zougmoré, who leads CCAFS research in West Africa. “This study highlights the need for more innovation and cooperation in the Volta to make sure farmers in the region can adapt to these very challenging conditions caused by global warming.” CCAFS funded the study along with Germany’s Ministry for Economic Cooperation and Development.

The Volta River Basin encompasses 402,000 square kilometers. Most of this area is in Ghana and Burkina Faso, with the remainder in Benin, Côte d’Ivoire, Mali and Togo. The basin’s population is expected to reach 34 million people by 2015, up from 19 million in 2000. Agriculture accounts for 40 percent of the basin’s economic activity.

As rains become less and less reliable in a changing climate, researchers and policy-makers have been exploring a shift to groundwater or other types of irrigation. Meanwhile, hydroelectric power plants are seen as crucial to sustaining industrial development and expanding economic opportunities.

The Volta Basin is already home to the massive Akosombo Dam, which created Lake Volta, the world’s largest man-made lake by surface area, and fourth largest reservoir by volume. Also coming on-line is the controversial Bui Dam project, which is expected to add 400 megawatts of power to Ghana’s strained power grid, along with 30,000 hectares of irrigated farmland. But the study predicts these projects and many others planned for the basin could fall far short of their potential due to climate change.

Running out of time

For example, it finds that by 2050, there would only be enough water for hydroelectric facilities to perform at about 50 percent of capacity. By the end of the century, there would be only enough to sustain about 25 percent. Irrigation projects would fare better, at least initially. The study finds that if all planned projects are completed, they could double water available for irrigation through 2050. But by 2100, as water losses accumulate, the system would be delivering only slightly more water than irrigation projects provide now, and not nearly enough to meet demand.

The study shows the loss of water in the basin would be especially challenging for poor farmers in rural areas, where agriculture is the primary provider of food and income. In addition to problems for large-scale irrigation projects, the small-scale irrigation that is common throughout the region would also be affected. The IWMI study warns that groundwater could become harder to utilize, “especially the shallow groundwater” typically used in rural communities.

McCartney cautioned that the predictions for water resources in the Volta are not absolute. But he said there are enough warning signs in the data that decision-makers need to be thinking of a more resilient mix of options for energy and agriculture to stand up to the climate challenge. For example, the study suggests considering a broader mix of renewable energy sources, including wind and solar. Water storage options should not be confined to projects that employ large dams, the researchers said. Equal consideration should be given to alternative water storage systems.

For farmers, McCartney said the solutions could include improving groundwater supplies available to rural areas by “recharging” local aquifers with water taken from rivers or reservoirs. This is a practice that is becoming increasingly popular in the water-stressed regions of the world. The study also calls for pursuing relatively simple, small-scale approaches to water storage, such as building small ponds on rural farms and using water tanks with roofs that reduce evaporation.

“Africa has the potential for innovation and solutions. We need to harness that innovation and combine it with solutions that we know work to feed Africa,” said McCartney. “This week’s conference will feature many of these solutions.”