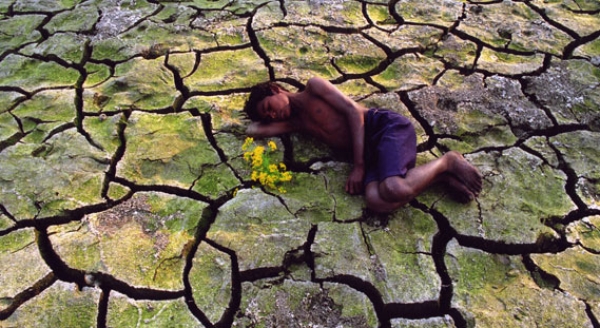 “Sleeping on the river bed” by Nimai Chandra Ghosh, award winning photograph from the WHO photo contest “Images of Health and Disability 2007.”

The City of Johannesburg has initiated a dialogue on the topic of climate change and its impact on human health. The aim is to initiate discussion between various stakeholders such as media, academia, NGOs, civil society, the business sector as well as national and provincial government.

The science of climate change indicates that the world is now exposed to future warming beyond 2°C. This is a consequence of the inertia in the international climate change negotiations to reach a new global deal. Increased temperatures will result in more heat waves that will enhance incidences of heat wave strokes, decreased economic activity and output, increased risk of heat, related mortality especially for the elderly, chronically sick and socially isolated.

Some of these ailments may be exacerbated by poor air quality. Heat related water borne and vector diseases are expected to increase due to increased flooding that could result in the contamination of water supplies.

Heat waves quietly on the rise

Heat waves claim more lives each year than floods, tornados and hurricanes combined and yet are rarely given adequate attention (Earth Policy Institute 2003). For instance, in August 2003 an estimated 35 000 people died from the heatwave that hit several cities across Europe. Temperatures soared to 40oC in France and remained unusually high for two weeks resulting in over 14 802 deaths, a death toll about 19 times more than the SARS epidemic globally.

“Climate Change has emerged as a significant factor in city management globally. High temperature variability and predictability have led to disasters which in 2009 claimed thousands of lives globally and led to economic losses of USD billions” Executive Mayor of the City of Johannesburg, Councillor Parks Tau.

The North Eastern parts of South Africa, including the City of Johannesburg, experienced two heat waves in series during the early summer season of 2011. The heat waves occurred during the last week of October and second week of November and lasted for a week and a couple of days respectively. Both heat wave events had been significant in that a few temperature records were broken across Gauteng. Notably Johannesburg Botanical Gardens station recorded its highest temperature of 35.3°C in October 2011, breaking a 2002 record of 33.1°C for the month.

There was no data released on any incidences relating to the above mentioned heat waves in South Africa subsequent to these two important climatic events, prompting the current dialogue.