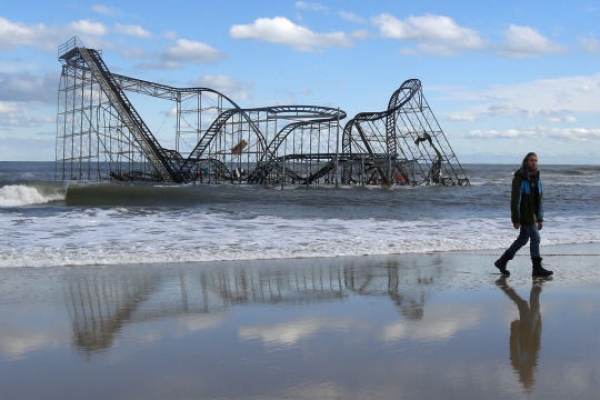 A rollercoaster that once sat on the Funtown Pier in Seaside Heights, N.J. now rests in the ocean. The pier was washed away by superstorm Sandy.

As governments meet for climate talks in Doha, Greenpeace warned on Monday that they must wake up to the reality that climate change is already gripping the planet and take urgent action to avoid catastrophic global warming.

This year has already seen devastating storms, droughts and floods causing significant loss of life, including in the US, China, India, Africa and Europe. This should be seen as a warning signal and a test of whether governments will protect their people.

“Climate change is no longer some distant threat for the future, but is with us today. At the end of a year that has seen the impacts of climate change devastate homes and families around the world, the need for action is obvious and urgent,” said Martin Kaiser, Greenpeace climate campaigner.

At stake in Doha is the future of the Kyoto Protocol, the only legally binding cap of greenhouse gas emissions, whose first commitment period expires at the end of this year.

No more trading out of action

Greenpeace is demanding that a second commitment period be agreed on in Doha, and that it does not carry over the excess emission rights – or ‘hot air’ allocation – that allows governments to trade their way out of real climate action. The leftover hot air is estimated to total 13 billion tonnes of CO2 – equivalent to 2.5 times the annual emissions of Europe.

The problem is getting worse. In the past five years, the growth in coal use has caused over two-thirds of the increase in global CO2 emissions, pushing greenhouse gas emissions to a record high. In recent weeks, the World Bank, the CIA and the UNEP have each warned about the consequences of unchecked climate change. This is a wake-up call.

“The world’s energy economy is not just going in the wrong direction, it is accelerating in the wrong direction. In Doha governments must agree to the continuation of the Kyoto Protocol, and close the loopholes that could give countries a free pass to pollute for years. They must also bring ambition on immediate emissions reductions and urgency back to the talks,” Kaiser added.

Wake up and face reality

“This in turn will send signals to investors about the future shape of the energy economy. Government leaders must help bring about an energy revolution from dirty to clean energy. It is time for them to wake up and face reality.”

At climate talks in Durban last year governments agreed to sign a legally binding global deal in 2015, as well as to cut emissions for the period until it comes into force in 2020. At Doha they must show real progress towards the 2015 agreement and greater ambition on their targets for 2020.

“Protecting the world’s remaining tropical forests is a key part of the solution to tackling the climate crisis,” said Roman Czebiniak, a senior political advisor at Greenpeace International.

“Governments must ensure that a forest funding window is established within the Green Climate Fund to ensure adequate and predictable funding to halt the destruction of forests in developing countries. The world’s forests must be at the heart of the climate change solution.”