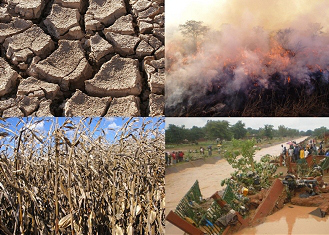 Time is running out.

This week, government officials and climate scientists from all over the world are meeting in Berlin, Germany, to finalize a U.N. study on climate change and its solutions.

While the study hasn’t been released yet, a draft of it has, and it’s pretty stunning.

The draft report from the International Panel on Climate Change, or IPCC, says that time is quickly running out for world powers to slash their use of fossil fuels and stay below the 2 degree Celsius limit on global warming that 200 nations agreed upon in 2010.

Only 15 years to take proper actions

More importantly, the draft suggests that we only have 15 years to take the proper actions needed to safely reach that global warming limit. Not 100 years, not 50 years, but just 15 years.

This meeting in Berlin comes just a week after the IPCC released another report in Japan, which highlighted the sudden, catastrophic, and devastating effects that climate change is already having across the globe.

Meanwhile, as the world’s top climate scientists are meeting in Berlin, the president of the World Bank, Jim Yong Kim, is worrying about the effects that climate change is having on world-wide access to food and water.

Battles over food and water will erupt

In an interview ahead of next week’s meeting of the World Bank, Kim argued that battles over food and water will erupt across the globe within the next five to 10 years because of climate change.

Kim said that, “The water issue is critically related to climate change. People say that carbon is the currency of climate change. Water is the teeth. Fights over water and food are going to be the most significant direct impacts of climate change in the next five to 10 years. There’s just no question about it.”

And arguably, as we saw with the events of the Arab Spring, they’ve already started.

Kim said that he has urged climate change activists, government officials, and scientists across the globe to learn lessons from the way protestors and scientists came together and joined forces in the battle against HIV and AIDS.

He also expressed concerns over the amount of research that’s being done on renewable energy and solutions to climate change, saying that, “Is there enough basic science research going into renewable energy? Not even close. Are there ways of taking discoveries made in universities and quickly moving them into industry? No. Are there ways of testing those innovations? Are there people thinking about scaling [up] those innovations?”

Unfortunately, here in America, things are stalled. Despite the mountains of proof and scientific evidence, Republicans in Washington, and across the country, are continuing to push climate change denial policies and legislation at the behest of their Big Oil, Coal, and Gas “donors.”

Just last week, Republicans in the House tried to pass a bill introduced by climate-change denying Congressman Jim Bridenstine of Oklahoma, that would have forced NOAA, the National Oceanic and Atmospheric Administration, to quit studying climate change and its effects so much, and instead just study and discuss “weather.” This was, of course, to help “the economy” – Republican code for fossil fuel barons like ExxonMobil and the Koch Brothers.

Fortunately, much to the displeasure of climate-change deniers in Washington, Democrats amended the bill to clarify that it would only deal with NOAA’s weather prediction work, and not cut or stop its research into climate change.

But, despite the NOAA victory, it looks like Republican climate-change denial efforts may still be working.

According to a new Gallup poll, a majority of Americans still have low levels of concern about the future impacts of climate change.

Just a little over a third of those polled said that they worry “a great deal” about climate change and global warming.

It’s time to put an end to all of the pseudoscience and climate-change denial talk.

Whether Republicans want to admit it or not, not only is climate change very real, but it’s also hitting us a lot harder, and a lot sooner, then we once thought.

Only years to convert away from fossils to sunlight

Just a few years ago, the world’s top climate scientists were saying that we had decades to address and solve the climate change crisis.

But now, we have just a matter of years to convert our energy systems from fossils to sunlight.

We’ve waited long enough to address the climate change crisis, and in the process, we’re already creating havoc. From superstorms, droughts, and killer cold- and heat-waves to the crop failures in the Middle East that touched off the Arab Spring, climate change is here, now.

Having doctors no good when human race is threatened

The Affordable Care Act was a big deal, but having a doctor does you no good when the entire human race is faced with extinction.

We need to mobilize our nation the way we did for World War II and jump headlong into the 21st century, thus solving the problem of the world’s largest polluter and providing an example for the rest of the world. And we need to start today. Time is running out.

Thanks to Truthout for the original article.