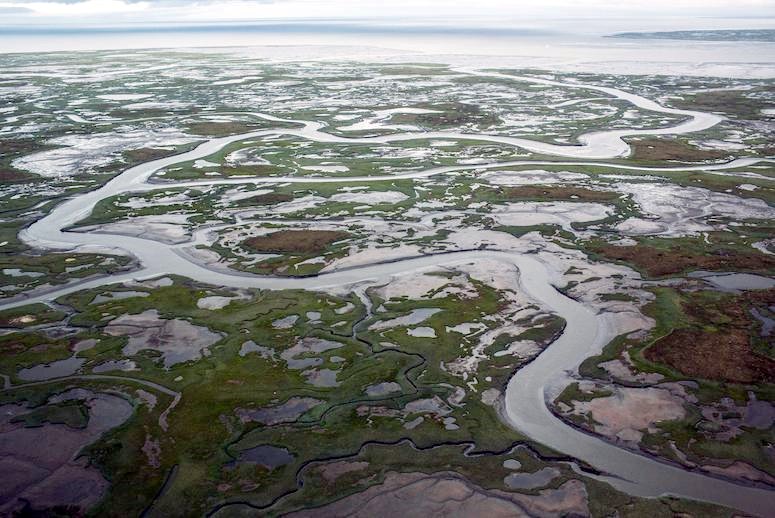 Newtok, Alaska: Newtok, which has a population of approximately of 375 ethnically Yupik people, was established along the shores of the Ninglick River, near where the river meets the Bering Sea, by the Bureau of Indian Affairs (BIA) in 1959. The Yupik people have lived on the coastal lands along the Bering Sea for thousands of years. However, as global temperatures rise the village is being threatened by the melting of permafrost; greater ice and snow melt – which is causing the Ninglick river to widen and erode the river bank; and larger storms that come in from the Bering Sea, which further erodes the land. According to the U.S. Army Corp of Engineers, the high point in Newtok – the school – could be underwater by 2017. Image: Andrew Burton/Getty Images

Climate change is thawing Arctic ground that was once frozen all year, making it a potentially potent new source of toxic mercury pollution in the region, according to a new study.

Their research, published Friday in the journal Science, found that Arctic permafrost contained high levels of the bacteria that transform inorganic mercury into hazardous methyl mercury.

Exposure to that form of mercury can cause nervous system and other developmental damage in mammals, including human fetuses and children.

“With increasing temperatures, particularly in northern latitudes, depths below the surface that were permafrost 10 and 20 years ago now annually freeze and thaw,” said study co-author Dwayne Elias, a microbiologist with the federal Oak Ridge National Laboratories.  “If this continues, and it probably will, the permafrost of today will become the active layer of tomorrow, [allowing] the bacteria carrying these genes to essentially wake up from being dormant for thousands and thousands of years.”

The researchers found the key genetic markers that reveal the presence of methylating bacteria in other environments, he said, including coastal dead zones. But permafrost samples “gave us some of the highest counts in all of the thousands of samples” they analyzed, said Elias.

Elias and his colleagues tested over 3,500 “metagenomes”—the combined genetic material from all the organisms present in a sample of water, soil, or other environmental matter—for the genes present in bacteria capable of transforming inert mercury into toxic mercury. The metagenomes represented a comprehensive sample of the world’s terrestrial and aquatic environments, he said.

Mercury pollution in the Arctic occurs when global air and ocean currents carry emissions from coal-fired power plants in parts of Asia, Europe, and North America, into the high north, where they fall onto ice and snow on land and on the ocean’s surface. When that mercury meets up with bacteria containing methylating genes, toxic mercury is the result.

“Once that methyl mercury is made in the subsurface [soils], that’s essentially in groundwater, the water in the subsurface that eventually makes its way into rivers and streams,” said Elias. Wild Arctic game such as moose and caribou ingest that mercury when they drink from contaminated waterways, leading the people who hunt and consume those animals to ingest it as well.

Marine animals will be exposed

Marine wildlife common in traditional northern diets, including fish, seals, and whales, will also be exposed to this new source of toxic mercury, Elias said. “That groundwater is going to make its way into the marine environments—and we also saw quite high counts of the genes in coastal dead zones and coastal marine areas as well,” said Elias.  “So one way or another, in the rivers and streams or on the marine side, this methyl mercury is going to make its way into the animals that eventually get consumed by the local populations.”

Fish and marine mammals accumulate toxic mercury in their tissues as they consume contaminated animals or plants. That has already lead to health problems for Arctic peoples who eat those animals.

A study published in August by the journal Environmental Health Perspectives reported that among Inuit communities in northern Quebec, Canada, women and children were ingesting nearly two times the government’s recommended maximum daily intake of mercury.

Children in some of these villages scored an average of five points lower on intelligence tests than children in less-remote Arctic communities, and were four times more likely to need remedial education.

There appear to be fewer data on toxic mercury exposure in the European Arctic, although in 2014 scientists reported high levels of mercury among residents of two coastal communities in Greenland. In 2004, researchers reported that in the sub-Arctic Faroe Islands of the North Atlantic, children born to mothers who ate pilot whale meat while pregnant had impaired cognitive abilities, hearing, and heart health throughout childhood and into their teen years.