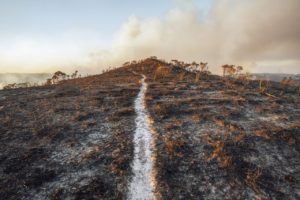 Australia, like South Africa in the last week and so many other regions across the globe before, has instituted strict lockdown measures to combat the spread of the Coronavirus (COVID-19). Though this is not the first large scale crisis the country has been faced with since the start of the year, as just a few short months ago Australia was still making international headlines under also immensely tragic circumstances as rampant bushfires ravaged through large geographic areas of the country. Bushfires so large they create their own self-perpetuating weather systems and blanket entire cities in thick, toxic smog.

While the country is also now faced with the economic and socioeconomic knock-on impacts of COVID-19, this week marks the end of the 2019-20 bushfire season in the country, however, the true costs of the devastating fires to the Australian economy and people are still being determined. Though based on initial reports, it has been confirmed that multiple millions of hectares of bush, land and forest have been burned, numerous people have died due to the fires and the poor air quality resulting from the smoke and smog, many hundreds of thousands more people have been displaced and affected – and it is estimated that over one billion animals have been affected too.

In a recent discussion with Kieran Power, WSP Australia’s Lead for Resilience and Climate Adaptation, we contemplated the lessons South Africa might draw from the Australian experience with respect to enhancing the climate resilience of our communities, cities and businesses, with three key takeaways:

#1 Politicise climate change at our own risk

Similar to the USA, Australia has long seen the heavy – and sometimes nefarious – politicisation of the climate change debate. Look no further than the large-scale deployment of trolls and social media bots to spread disinformation on the causes of the bushfires.

In South Africa, we have broad political support for the scientific consensus on climate change. However, the Australian experience should serve as a warning to parties such as Cosatu and the Minister of Mineral Resources and Energy in their partial push-back on the decarbonisation of South Africa’s electricity supply.

A somewhat surprising outcome of the Australian bushfire tragedy is the elevated prominence given to combining traditional Indigenous knowledge with modern science and technology as a key method to reduce loss of property, human and animal life from out-of-control blazes, primarily through the use of frequent, low intensity and small-scale burn-backs.

This serves as a reminder that traditional knowledge often holds part of the solution to numerous environmental sustainability challenges that we face, especially when combined with modern scientific and engineering techniques.

The final takeaway is the critical importance not only of the immediate disaster management response, but of the longer-term institutional, behavioural and engineering/infrastructure response to climate change-influenced natural disasters. Whether it is an unprecedented drought in Cape Town, devastating fires in Knysna or destructive flash floods in Gauteng and KwaZulu-Natal, it is critical that climate resilience be integrated into post-disaster investment planning, lest the mistakes of the past be repeated.

Through all tiers of society in South Africa there is already a sense of awareness of changing weather patterns and increasing frequency and severity of extreme weather events experienced across the country – and these continue to spotlight environmental issues and risks faced in the country. We can no longer afford to keep designing for historical conditions. We must adapt how we design and plan for societal resilience – to build spaces that can withstand socioeconomic and climatic changes and where societies can thrive, well into the future. And succeeding in this will take input and a strong will of shared accountability, from society, the private sector and the public sector, alike.

WSP is one of the world’s leading engineering professional services consulting firms, bringing together approximately 49,500 talented people globally. They are technical experts who design and provide strategic advice on sustainable solutions, engineering projects that will help societies grow for lifetimes to come.